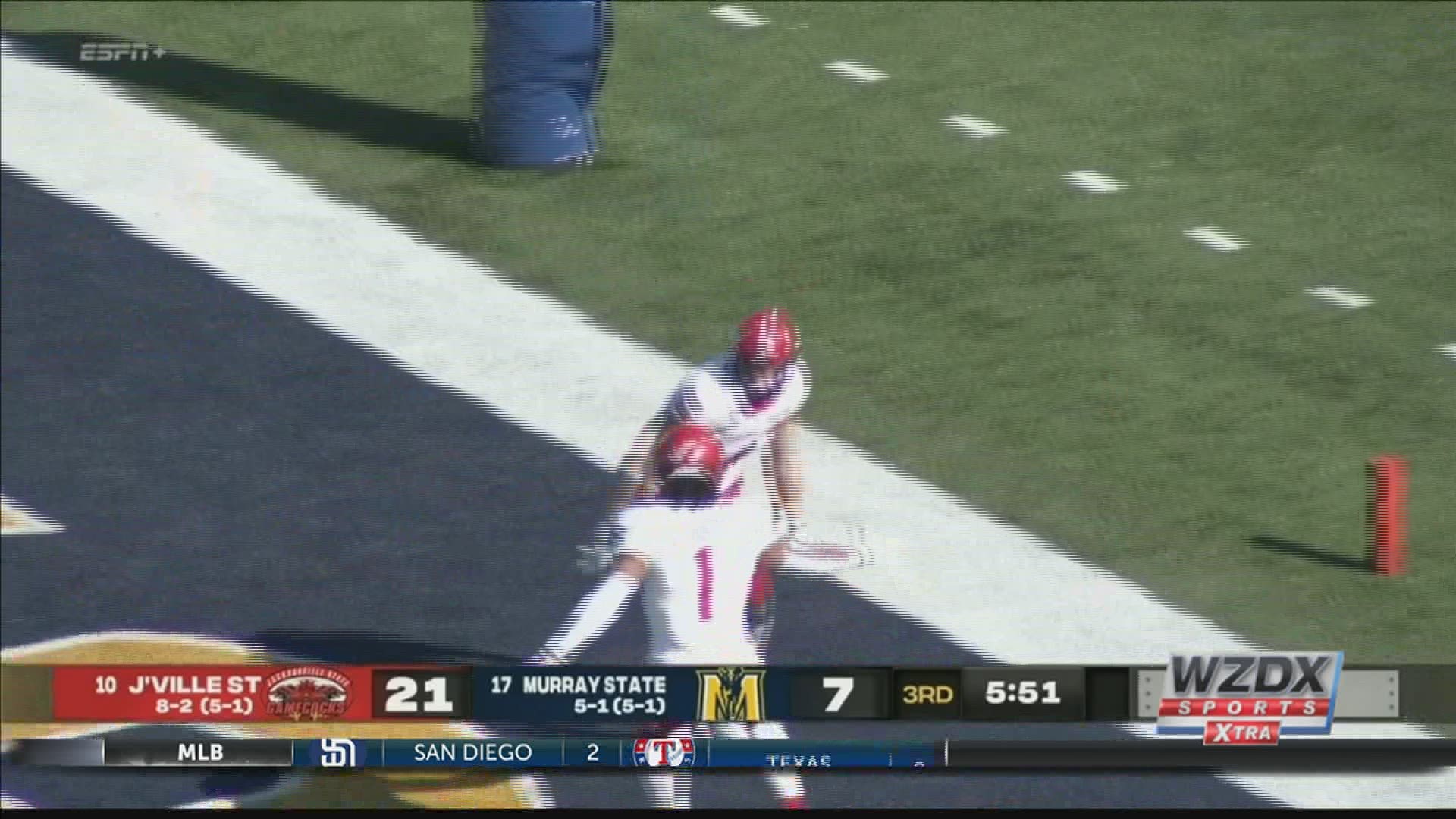 MURRAY, Kentucky — The longest season in No. 10 Jacksonville State's storied football history is assured of lasting at least one more week, and hopefully even longer.

The Gamecocks waved goodbye to the Ohio Valley Conference with their ninth league title and secured an FCS playoff berth with a 28-14 win over No. 17 Murray State at Roy Stewart Stadium on Sunday.

Jacksonville State - which has an open date next weekend - will carry a 9-2 record into the postseason after going 6-1 against OVC competition in the spring its last year of membership.

The FCS Football Selection Show will be held Sunday, April 18, at 10:30 a.m. on ESPNU. The playoffs begin on April 24 and Jacksonville State is eligible to host a first-round game.

The Gamecocks rolled up 281 yards in the first two quarters and scored touchdowns on three straight drives covering at least 65 yards. Jacksonville State also benefited from a pair of missed field goals by Racers kicker Aaron Baum, who failed to convert from 43 yards in the first quarter and 38 yards just before halftime.

Senior tight end Trae Barry hauled in a 39-yard toss from Zion Webb as the Gamecocks drove deep into Murray State territory on their second series. Webb scored on an 11-yard scamper on the next play and Alen Karajic tacked on the extra point for a 7-0 lead with 8:12 remaining in the first.

The Webb-to-Barry connection staked Jacksonville State a 14-0 lead on the next series. Barry became JSU's all-time leader in career receiving yardage by a tight end with another 39-yard reception down to the Murray State 12, then Pat Jackson ran 11 yards to the Racers 1.

Webb finished off the five-play drive with a 1-yard run and Karajic's PAT made it 14-0 at the 1:39 mark in the first.

Murray State responded with its only points of the half on a 30-yard touchdown pass with 24 seconds left in the opening quarter.

Webb completed four passes on the ensuing drive and got the Gamecocks into the red zone with a 16-yard jaunt early in the second quarter. Josh Samuel ran the last yard to complete the 14-play, 74-yard march and Karajic's kick gave JSU the 21-7 cushion it carried to the locker room at half.

Congrats to @JSUGamecocksFB on winning the 2020-21 OVC Football 🏈 Championship and earning an automatic bid to the #FCSPlayoffs.

Webb hit Barry with an 18-yard touchdown pass in the third quarter to complete a seven-play, 81-yard scoring drive. It was Webb's 16th touchdown pass of the 2020-21 season.

Webb accounted for 304 scrimmage yards against the Racers. The junior quarterback ran 12 times for 65 yards and threw for 239, completing 17 of 28 passes without an interception.

Nicario Harper and Marshall Clark were Jacksonville State's top tacklers with eight each. Jamias Presley had a fourth-quarter interception to seal the win and also contributed five tackles.

JSU held a 444-373 advantage in total offense and limited Murray State to 26 yards on the ground. It marks the ninth opponent held to less than 100 yards rushing, breaking the season mark set by JSU's defenses in 2016 and 2017.