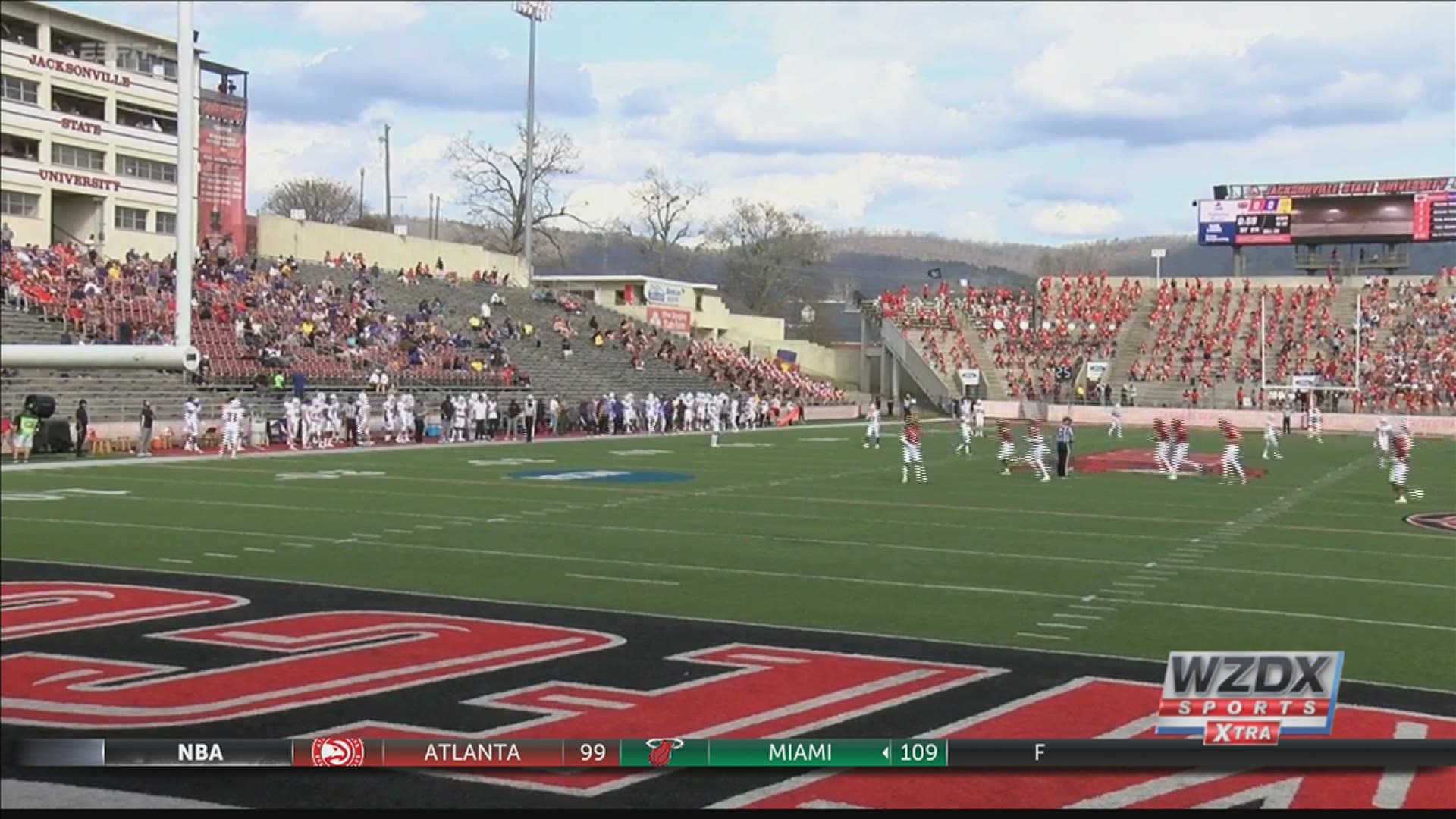 JACKSONVILLE, Alabama — The momentum built during the abbreviated fall 2020 campaign carried over to spring as No. 16 Jacksonville State defeated Tennessee Tech 27-10 on Sunday for its fourth straight win.

The Gamecocks (4-1, 1-0) relied on an opportunistic defense that forced the No. 23 Golden Eagles into five turnovers and a punishing ground game that rolled up 274 yards to win their league opener in their final season as an Ohio Valley Conference member.

Uriah West ran for 106 yards – his second straight 100-yard rushing performance – with one touchdown, Zion Webb rushed for 70 and Pat Jackson finished with 62 yards as Jacksonville State outgained Tennessee Tech 399-227 and beat the Golden Eagles (1-1, 0-1) for the eighth time in the last nine meetings.

"Overall, just a very good first game," said Jacksonville State head coach John Grass, who also celebrated his 53rd birthday on Sunday (his actual birthday is Feb. 29). "You're always concerned when the other team has played a game before you've played, but I don't think was a factor. We played a lot of guys, and that helps. I thought that was huge tonight.

"The game ball goes to our defense for sure. Those guys bailed the offense out several times, especially in the third quarter holding them to a field goal and blocking another field goal. We've got to do a better job offensively, taking care of the ball and just improving all the way around," Grass added.

Webb, making his first career start, completed 12-of-19 passes for 125 yards, including a 19-yard touchdown to Dave Russell III early in the fourth quarter. The junior from Phenix City, Alabama also was intercepted once.

The first official touchdown ever scored by a Gamecock player in the month of February came less than seven minutes into the game.

@JSUGamecocks improve to 4-1, 1-0 in the OVC. Next up is a trip to Tennessee State next Sunday at Hale Stadium. #FearTheBeak #StayCocky pic.twitter.com/IndLvKqTrZ

Jacksonville State started its spring season with an efficient, time-consuming 53-yard scoring drive that took 14 plays. Josh Samuel, who had two touchdown runs in the Gamecocks' victory at Florida International last October, ran in from the 2 and Alen Karajic added the extra point for a 7-0 JSU lead with 8:02 remaining in the first quarter.

Safety Kolbi Fuqua forced Golden Eagles' quarterback Bailey Fisher to fumble on the ensuing possession and recovered the football at TTU's 40. Jacksonville State needed just four plays to find the end zone, with West scoring on a 13-yard run at the 3:28 mark.

Tennessee Tech got on the scoreboard after forcing the Gamecocks into the first of their three turnovers. TTU covered 41 yards in seven plays with Fisher diving in from the 1 to complete the scoring drive. Hayden Olsen's extra point trimmed JSU's lead to 14-7 with 10:28 left in the second quarter.

Karajic, a freshman who converted 8-of-9 field goal attempts during the fall, stayed hot with a 34-yard kick with 7:40 to go before halftime to extend the Gamecocks' cushion to 17-7.

Karajic later wrapped the scoring with 3:43 remaining by kicking a 23-yard field goal to cap off an eight-play, 85-yard drive by the Gamecocks.

Harper was credited with a game-high tackles to lead Jacksonville State defensively.

Jacksonville State travels to Nashville next Sunday to face Tennessee State (0-1) at Hale Stadium. Kickoff is at 2 p.m. and the game will be available on ESPN+.