Hatton's boys and girls basketball team along with Pisgah competed for a spot in their respective state championship games on Wednesday. 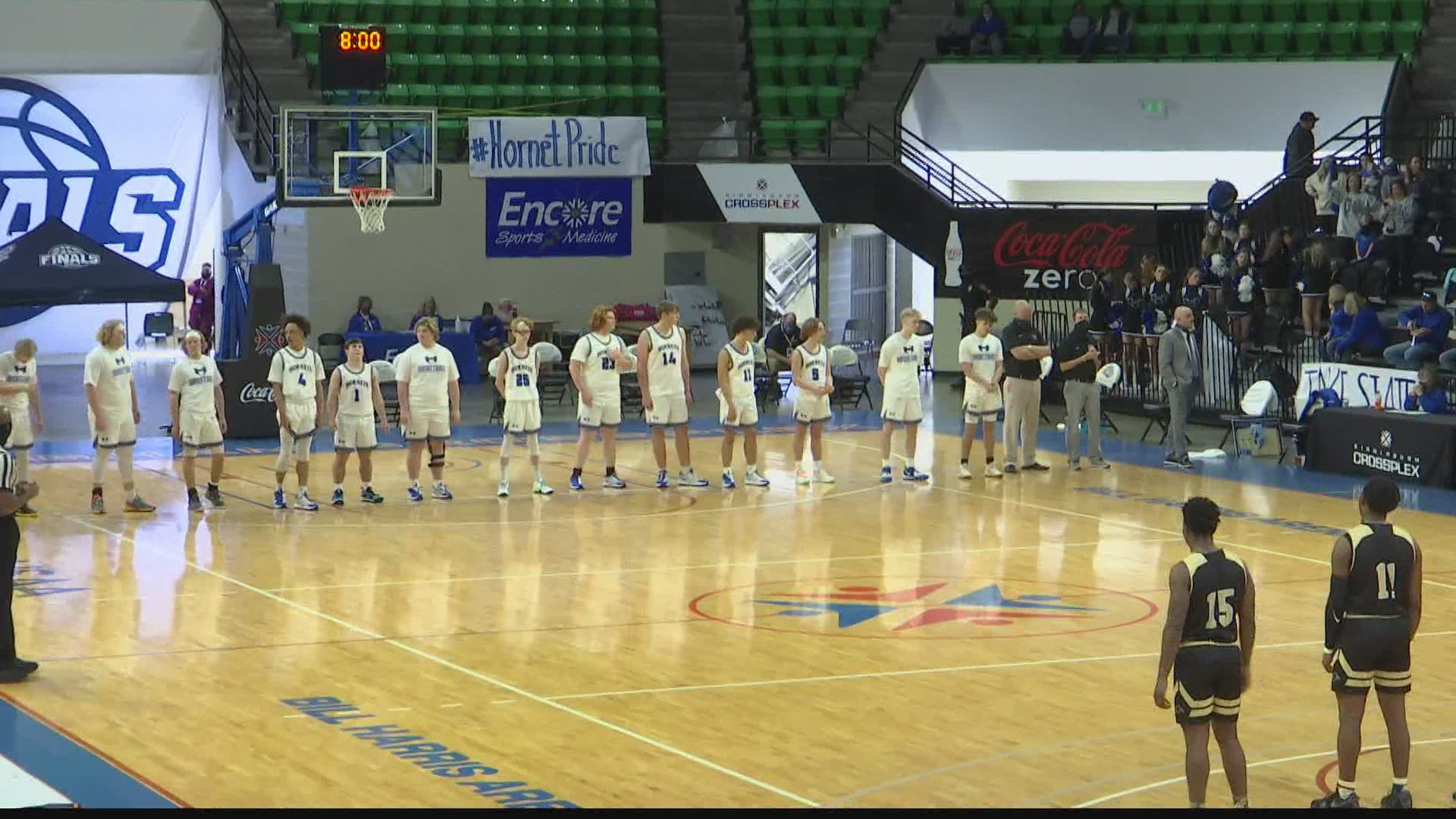 BIRMINGHAM, Alabama — Pisgah's girls along with the Hatton boys and girls basketball teams competed for a spot in their respective state championship games on Wednesday.

Hatton High School’s girls’ basketball team is back in the state championship game for the first time since 2004. The Hornets (25-3) led from start to finish – despite committing 29 turnovers – in a 45-38 victory over Lanett in Wednesday’s Class 2A Girls’ State Semifinals at Bill Harris Arena at the Birmingham CrossPlex.

Hatton advances the 2A championship game, which is set for Saturday at 9 a.m., at Bill Harris Arena against Pisgah (23-6) or St. Luke’s Episcopal (14-3), which play later Wednesday in the other semifinal. It’s the Hornets’ first title-game appearance since winning the 2A championship in 2004 by beating Pisgah.

Hatton could never pull away, and Lanett cut the deficit to five, at 43-38, with less than two minutes to go. The Panthers turned a steal into two layup attempts, and Hatton’s Kamie Kirk snatched her 14th rebound to keep Lanett from getting any closer.

The @hattonhigh Lady Hornets are heading to the #AHSAA Class 2A State championship game. They defeated Lanett 45-38! We’ll have highlights tonight on WZDX! @rocketcitynow pic.twitter.com/6bfUkTJF3P

It’s Pisgah’s fifth straight trip to the championship round, but first in 2A, after winning 3A state titles in 2018, 2019 and 2020 and finishing as 3A runner-up in 2017. The Eagles also finished 3A runner-up in 2015, and advanced Wednesday to the championship game for the sixth time in the last seven seasons.
Pisgah (27-6), coached by Carey Ellison, advances to play Hatton, which defeated Lanett in Wednesday’s other semifinal, in Saturday’s 2A championship game at 9 a.m., at Bill Harris Arena.

Pisgah built a double-digit lead early in the second quarter and led by 20 midway through the fourth quarter, but St. Luke’s rallied and cut the deficit to single digits with about 1:30 to go.

Lanett is heading back to the Class 2A state championship game. The Panthers (19-4) defeated Hatton 83-48 in Wednesday’s AHSAA Class 2A Boys’ state semifinals at Bill Harris Arena at the Birmingham CrossPlex, sending Lanett to the title game for the fifth time since 2016. Lanett finished as 1A runner-up in 2020 after winning 2A titles in 2016, 2017 and 2018.

Lanett, coached by Trentavious McCants, advances to play in Saturday’s 2A championship game at 11:30 a.m. The opponent will be Midfield (24-6) or Calhoun (16-7), which play in Wednesday’s other semifinal.

For Hatton (18-8), coached by Justin Henley, forward Ridge Harrison scored 23 points, including 19 in the second half, to go with nine rebounds and three blocked shots. Kris O’Dell scored 14 points and grabbed seven rebounds before fouling out early in the fourth quarter. Braden Stafford had six points and 11 rebounds.

Lanett played 10 players, and all 10 scored. The Panthers also forced Hatton into 26 turnovers. The schools’ girls basketball teams played earlier in the day with Hatton winning 45-38.