Three teams from the Tennessee Valley played for a spot in their respective state championship games on Tuesday in Birmingham. 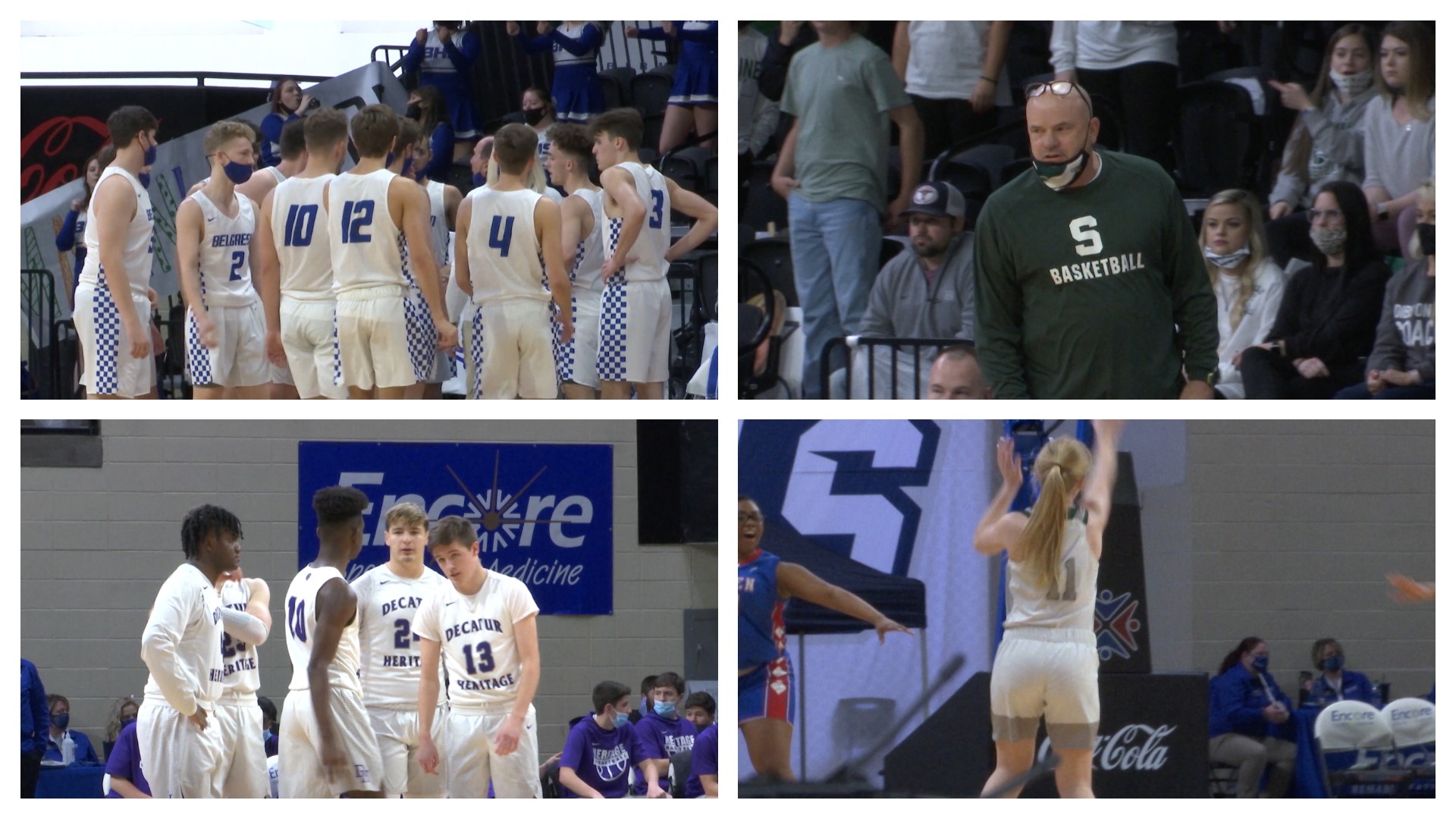 BIRMINGHAM, Alabama — The road to winning a blue map during the 2020-21 AHSAA season continued Tuesday with semifinal action. Three teams tried to punch their ticket to the state finals.

The Belgreen High School boys’ basketball team didn’t have any trouble shooting in a new environment like the Bill Harris Arena at the CrossPlex Tuesday.

The Bulldogs opened the game by hitting six of their first seven shots, including a trio of 3-pointers, to build a double-digit lead midway through the first quarter the AHSAA Class 1A State Basketball Championships semifinals at Bill Harris Arena at the Birmingham Crossplex and rolled to a 66-44 win over Notasulga.

Belgreen, coached by Marty Cooper, advances to the championship game for the first time since 1994. The Bulldogs will play in Friday’s title game at 4:30 p.m., against Decatur Heritage (20-7) or Autaugaville (29-0), who play later today in the other semifinal. Belgreen has never won a boys basketball state championship.

Autaugaville High School will get the chance to cap a perfect season after clinching a berth in the state finals Tuesday. The undefeated Eagles (29-0) defeated Decatur Heritage 62-48 in Tuesday’s semifinals of the AHSAA Class 1A Boys’ State Basketball Championships at Bill Harris Arena at the Birmingham CrossPlex.

Autaugaville built a double-digit lead in the first quarter, led by as many as 19 points and held off a late Decatur Heritage rally. The victory sends Autaugaville into Friday’s 1A championship game against Belgreen (26-2), which beat Notasulga in today’s other semifinal. Tip-off for Friday’s title game is set for 4:30 p.m., at Bill Harris Arena.

The Eagles, coached by Darren Golson, got a big performance from 6-foot-8 Dewaun Stubbs, who had 17 points, seven rebounds, four steals and three blocked shots despite picking up three first-half fouls that sent him to the bench for most of the second quarter. Three other players reached double-digit scoring – Antonio Hardy with 11 and Jaden Nixon and Makenzie Bristow-Matthews with 10 apiece. Bristow added three assists and three steals.

In the ultimate contrast in styles, Skyline played a full-court, run-and-gun style against a Linden squad built around getting the ball to 6-foot-6 sophomore Timya Thurman near the basket.
In Tuesday’s AHSAA Class 3A Girls’ State Basketball Championships semifinal battle at Bill Harris Arena at the Birmingham Crossplex, flash beat crash.
Skyline (29-7), with a roster listing no player taller than 5-foot-7, used its full-court press to stifle the Patriots (11-4) and earn a 60-38 victory. Gracie Rowell score 19 points, Gracie Stucky added 17 points, seven rebounds, six assists and six steals, and Aiden Bellomy had 12 points and four steals.
Thurman delivered a triple-double of 12 points, 11 rebounds and 11 blocked shots, but the Patriots committed 31 turnovers against Skyline’s constant full-court pressure. Alaysia Burns added 25 points and four steals.
Skyline made 10-of-28 from 3-point range, including four each by Rowell and Bellomy. Linden, meanwhile didn’t make a 3-pointer.
Skyline, coached by Ronnie McCarver, advances to play Marion County (29-7) in Friday’s championship game, with tip-off set for 2 p.m., at Bill Harris Arena. Marion County defeated Samson in Tuesday’s other semifinal. Skyline also advanced to the title game in 2019 before falling to Phillips-Bear Creek.