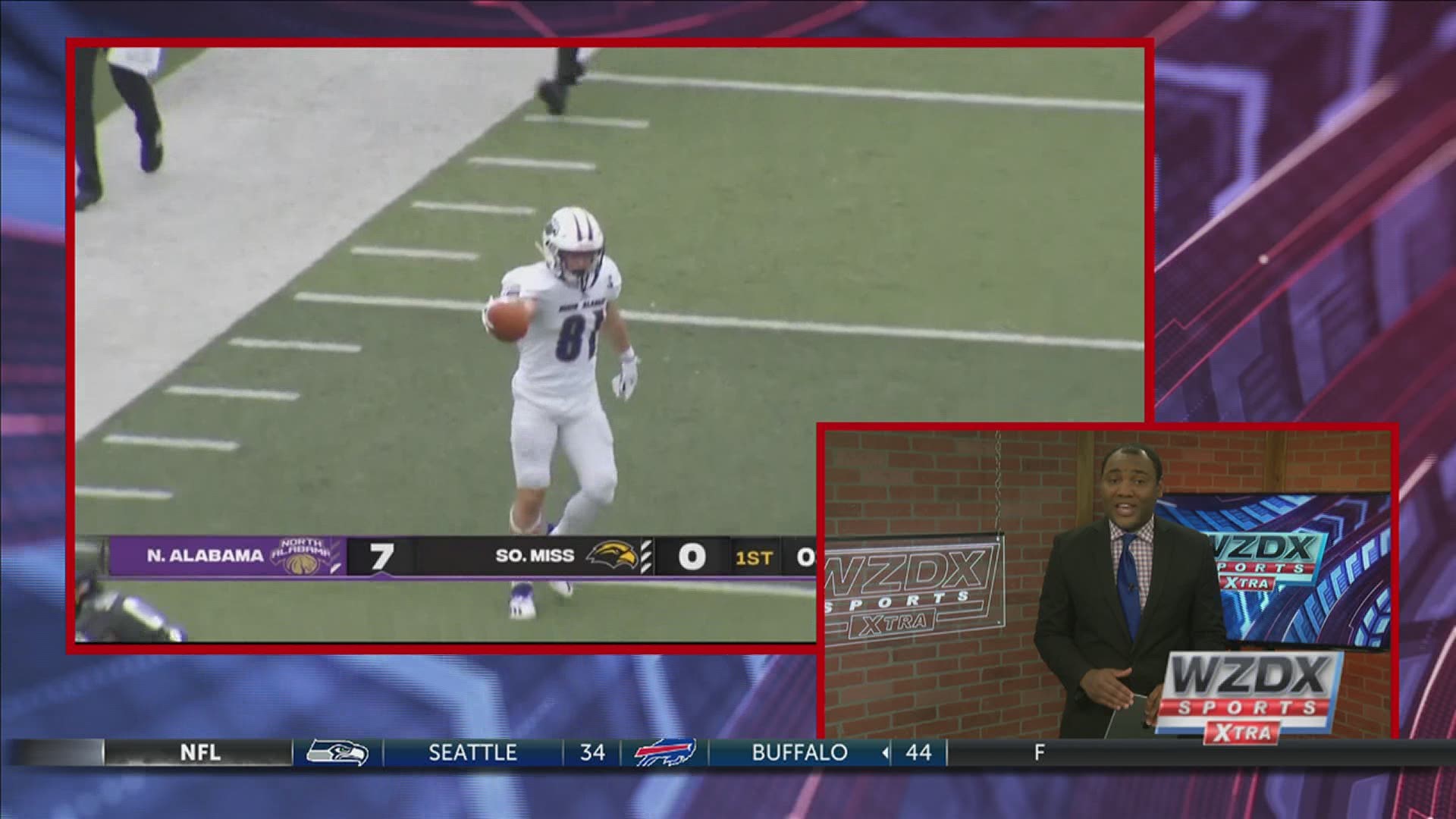 HATTIESBURG, Miss — The University of North Alabama forced four turnovers but the Lions' offense could only generate 13 points as the Lions came out on the short end of a 24-13 decision to Southern Mississippi at M.M. Roberts Stadium.

UNA scored on the game's second play from scrimmage and held a 13-7 lead in the fourth quarter before USM scored a go-ahead touchdown with 12:08 left in the contest and added another score with 5:33 left.

The Lions then had their first turnover of the day and USM was able to add an insurance field goal and hold on for the win.

With the loss, UNA falls to 0-3 on the season, with two of those losses coming to FBS opponents. Southern Miss improved to 2-5.

UNA finished with 175 yards of total offense but gained just 23 on the ground. Blake Dever was 21-of-28 for 153 yards and one touchdown.

UNA's Darrell Sims forced a USM fumble on the opening kickoff, giving the Lions the ball at the Golden Eagles 23-yard line. After a roughing the passer penalty moved the ball to the USM 12, UNA scored on the following play on a pass from Dever to Dexter Boykin. Grayon Easterling's PAT made it 7-0 at 14:48 of the first quarter.

North Alabama's Kyree Fields then picked off Trey Lowe on USM's second play from scrimmage to give the ball back to the Lions.

The Golden Eagles moved deep into UNA territory late in the first period but Will Evans recovered a Lowe fumble to stop the drive at the UNA 23-yard line.

The Lions extended their lead to 10-0 in the second quarter. Dever completed a 34-yard pass to Parker Driggers to move the ball into USM territory and Sam Contorno kicked a 29-yard field goal with 12:40 left in the second period to make it 10-0.

Final from Hattiesburg. The Lions will take on BYU on 11/21! #RoarLions pic.twitter.com/1e5BL1ugP7

Southern Mississippi finally got on the board with 7:19 left in the half on a one-yard run by Kevin Perkins, capping an 11-play, 70-yard drive. Briggs Bourgeois added the PAT to cut UNA's lead to 10-7.

USM had an opportunity to tie the game before the half but UNA's Mike Boykin blocked a 28-yard Bourgeois field goal attempt with 50 seconds left in the second period.

Following a Gerrell Green interception in the third quarter, UNA moved to the USM five-yard line before Contorno came on to boot a 22-yard field goal, making it 13-7 with 2:47 left in the period.

Southern Miss took its first lead of the game with 12:08 left in the final period on an 11-yard Perkins touchdown run. Bourgeois PAT made it 14-13. The drive was kept alive when USM converted on a fourth-and-four call at the UNA 25-yard line with a six yard pass from Lowe to Demarcus Jones. The Golden Eagles would score four plays later, capping a 12-play, 66-yard drive.

Natrone Brooks then picked off Dever on UNA's ensuing possession with 4:46 left.

North Alabama will have a week off before traveling to Provo, Utah to face nationally ranked and unbeaten BYU on November 21.