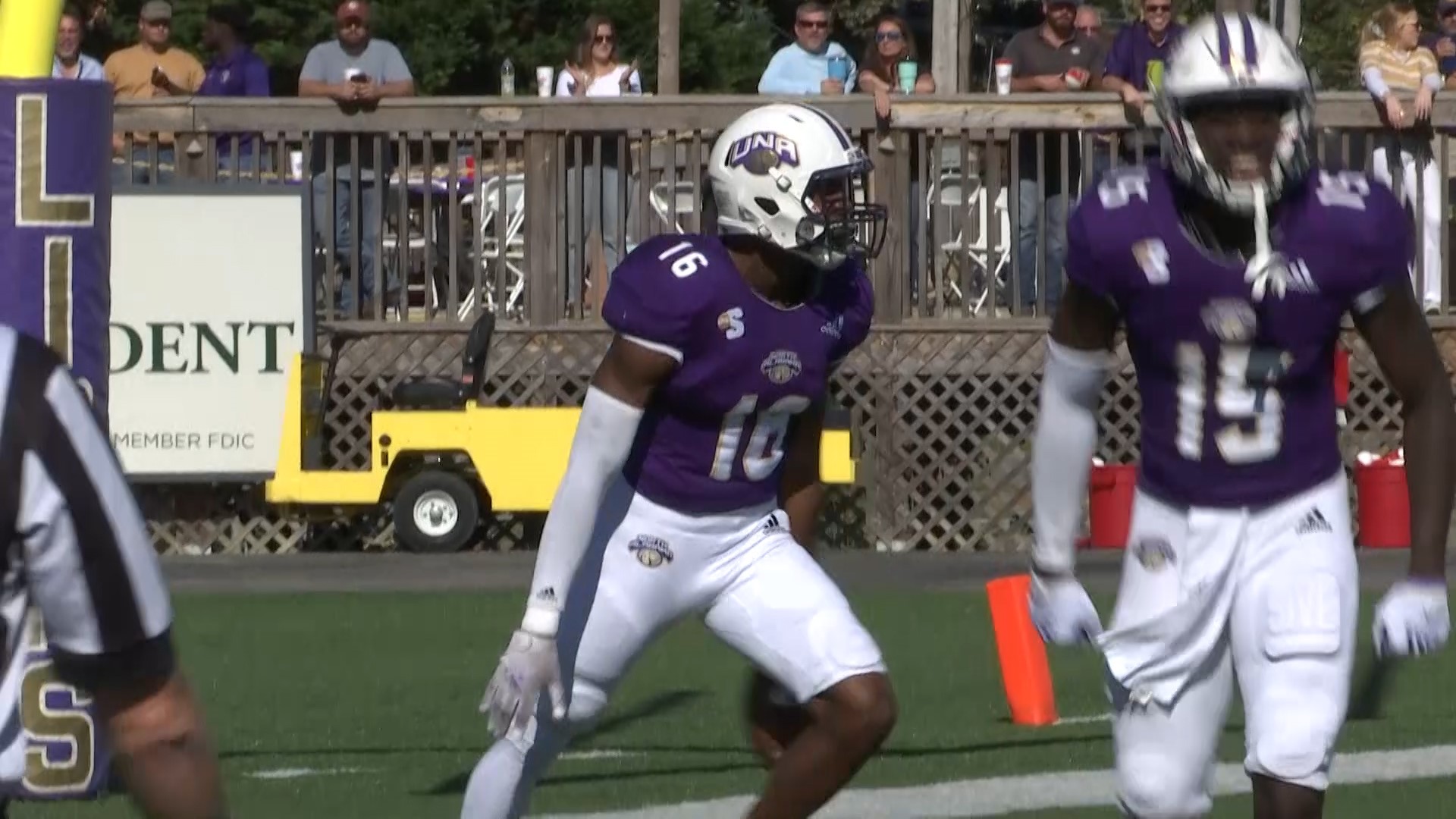 FLORENCE, Ala. — North Alabama played its most complete game of the season as Rett Files threw for three touchdowns and ran for another, the UNA defense caused five turnovers and the Lions' special teams blocked two kicks in a 45-22 win over Charleston Southern at Braly Stadium.

In picking up their second straight win, the Lions scored the most points in their Division I era.

North Alabama led 14-0 at intermission and stretched it to 17-0 in the third quarter before the Buccaneers could get on the board. The Lions then scored 28 points in the fourth quarter to complete the blow-out.

UNA got fumble recoveries from Jeffery Battle and Will Evans, interceptions by Chase Brown, Kyree Fields and K.J. Smith, a blocked punt by Brown and a blocked field goal by Micah Bland.

After gaining just one first down on its first three possessions of the game, the Lions found the end zone on their fourth drive as Rett Files connected on a 59-yard touchdown pass to Takaire Kenebrew. Grayson Easterling's PAT gave the Lions a 7-0 lead with 4:51 left in the first quarter.

UNA's Chase Brown blocked a Charleston Southern punt on the Buccaneers next possession and recovered at the CSU 15-line. Files then threw a fade to Kenebrew, who made a circus catch in the right corner of the end zone for his second TD of the play. The pass covered four yards and gave UNA a 14-0 lead with 15 seconds left in the opening period.

Brown added an 82-yard interception return after he picked off a Jack Chambers pass at the one-yard line to stop a scoring threat. The pick set UNA up in Buccaneer territory, but the Lions couldn't capitalize.

CSU had a scoring opportunity on the last play of the half but Micah Bland blocked a 20-yard Sam Babbush field goal attempt as time expired.

North Alabama added to its lead on the first possession of the second half as Easterling booted a 32-yard field goal to make it 17-0 at 8:34 in the third quarter.

Charleston Southern finally got on the scoreboard with 14:51 left in the game when Chambers scored on a three-yard run. Babbush's PAT cut UNA's lead to 17-7. The drive covered 85 yards in 15 plays.

UNA answered that score with one of its own just two plays later as Files connected with Kenebrew for their third TD connection of the day. This one was from 76 yards and Easterling added the PAT to make it 24-7 with 13:55 left in the game.

A Kyree Fields interception on CSU's next possession was the Lions' third takeaway of the day.

.@UNAFootball has now won back-to-back contests after handling business at home against CSU‼️

The Lions are in action again on the road against Monmouth on Nov. 6🏈#RoarLions pic.twitter.com/s9F9dYOZ63

UNA couldn't move the ball on that possession, but K.J. Smith picked off Chambers on the ensuing possession and returned it 26 yards to the CSU three-yard line. Files scored two plays later on a one-yard run with 10:29 left in the game to give the Lions a 31-7 lead.

Charleston Southern scored its second touchdown of the day with 9:16 remaining on a 20-yard pass from Chambers to Demetrius Jones. The Buccaneers added a two-point conversion to cut it to 31-15.

A 60-yard kickoff return by ShunDerrick Powell set UNA up at the CSU 25-yard line. Jaxton Carson scored two plays later on a 14-yard run and Easterling's PAT made it 38-15 with 7:33 left.

The Buccaneers added a touchdown with 39 seconds left to make the final count 45-22.

North Alabama will have a week off before traveling to Monmouth on November 6.