UNA overcame a 24-7 halftime deficit to take a fourth quarter lead, but the Lions couldn't hold it in a 38-34 loss to North Carolina A&T at Truist Stadium. 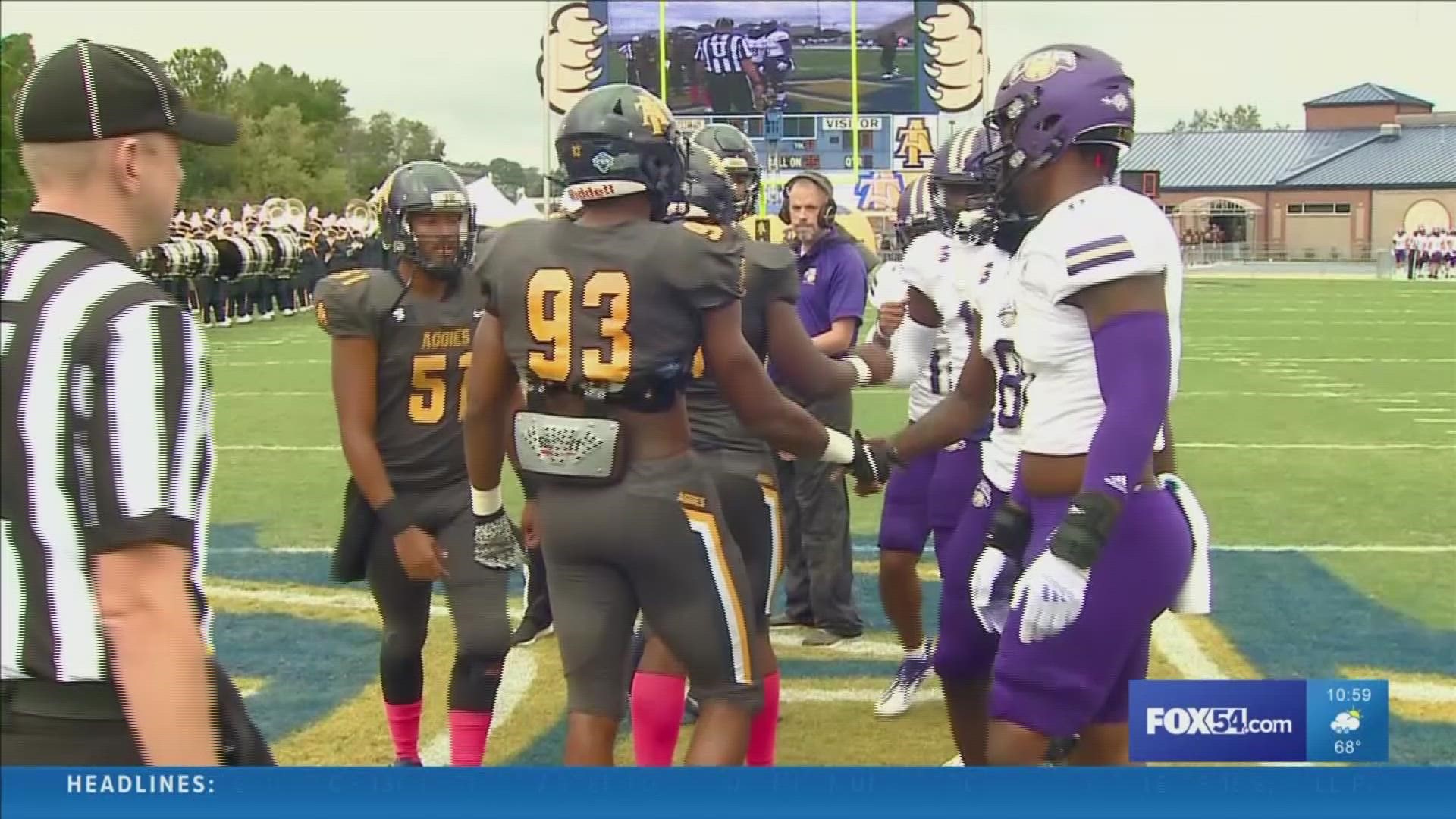 GREENSBORO, N.C. — North Alabama overcame a 24-7 halftime deficit to take a fourth quarter lead, but the Lions couldn't hold it in a 38-34 loss to North Carolina A&T at Truist Stadium.

The Lions led 7-3 in the first quarter but allowed three Aggie touchdowns before intermission.

UNA then came out and forced two early A&T turnovers to get back into the game in the third quarter and finally regained the lead at 34-31 with 6:47 left in the game.

After A&T regained the lead to hold a 38-34 advantage, UNA drove to the A&T 36-yard line before Rett Files pass was picked off by Herbert Booker with just 1:37 left in the game. It was the Lions' only turnover of the day.

North Carolina A&T scored on its opening possession but the Aggies were held to a field goal as Jalen Fowler drilled a 49-yard kick with 12:49 left in the first quarter.

North Alabama answered with a quick touchdown drive to take the lead as Rett Files hit a wide-open Dexter Boyking with a 61-yard TD pass at 6:18 of the first quarter. Grayson Easterling added the PAT to put UNA on top 7-3.

A&T went back on top with just 18 seconds left in the first quarter as Jalen Fowler hit Kashon Baker with a 29-yard touchdown pass. The PAT made it 10-7.

The North Alabama second half surge comes up just short as the Lions fall to North Carolina A&T. Dexter Boykin and Parker Driggers score 2 touchdowns each to outscore the Aggies 27-14 in the second half. The Lions are back at Braly next Saturday for Homecoming! #RoarLions pic.twitter.com/lGWbPpBK1M

North Alabama got an interception on the second play of the second half from K.J. Smith to set up a Lion score. It was Smith's fourth pick-off of the season.

The Lions drove to the Aggies' 14-yard line before Files hit Boykin with his second TD pass of the day with 8:55 left in the third quarter. Easterling's PAT closed to gap to 24-14.

Delawrence Butler forced an A&T fumble on the next possession that Evan Jones recovered and UNA would score two plays later. Parker Driggers gained eight yards on first down, then gained 30 more on his way to the end zone on the next play to make it 24-21 with 8:23 left in the third period.

North Alabama thought it had a defensive stop on the next possession when Evan Jones tipped away a pass on a fourth-and-eighth call, but an A&T receiver caught the deflected ball for a first down. Baker scored two plays later on a 16-yard run with 3:30 left in the third period. The PAT put the Aggies' lead at 31-21.

UNA answered with a seven-play, 84-yard drive for a touchdown, with Driggers taking it in from 18 yards out with 1:03 left in the third period. Easterling's PAT closed the gap to 31-28.

After a defensive stop, the Lions drove to take the lead. Aided by several penalties against the Aggies, UNA moved to the four-yard line before Files hit Nick Haynes with a touchdown pass to give the Lions a 34-31 lead with 6:47 left in the game. Easterling's PAT attempt was wide right.

Tuten caught a 60-yard touchdown pass from Fowler two plays later and A&T was back on top 38-34 after the extra-point.

North Alabama will celebrate Homecoming on October 16 when the Lions host Robert Morris at Braly Stadium. Kickoff is set for 6 p.m.