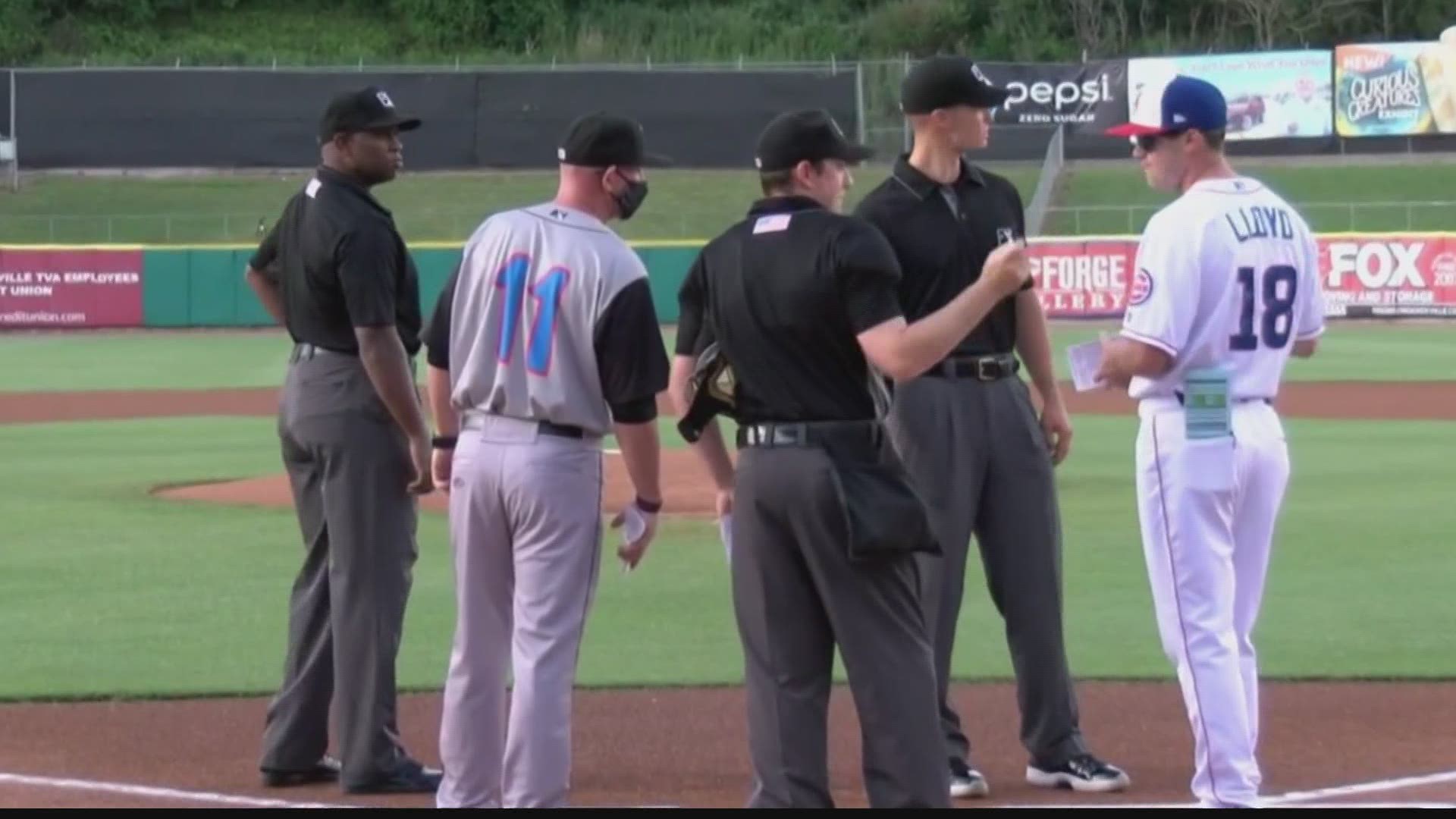 KODAK, Tenn. — In a game that saw both teams trade runs for most of the night, the Rocket City Trash Pandas were able to survive a late surge from the Tennessee Smokies for an 8-7 win in the opener of their six-game series at Smokies Stadium on Tuesday night.

The game began with the Trash Pandas falling behind in the bottom of the first as Smokies third baseman Levi Jordan lined a double down the left field line off Rocket City starter Kyle Tyler to score Darius Hill and open the scoring.

Rocket City was quick to respond in the top of the second with a solo home run to left-center from Matt Jones, his fourth of the season to tie the score at one.

An inning later, the visitors rallied to take the lead. Dalton Pompey led off the frame with a walk and Orlando Martinez singled to put runners on the corners with nobody out. David MacKinnon hit a sacrifice fly to center to score Pompey and Ray-Patrick Didder plated Martinez with a single to center later in the inning for a 3-1 Trash Pandas advantage.

Gavin Cecchini made it 4-1 Rocket City with his fourth home run of the season, a solo blast over the left field wall. Dalton Pompey followed with a triple off the center field wall and he came home to score on a double to left by David MacKinnon to put the Trash Pandas up 5-1.

The Smokies cut the deficit in half with a pair of runs in the fourth off Tyler to end his start. Over 3.2 innings, Tyler gave up three runs, two earned, with four walks and one strikeout in a no-decision.

In relief for the Trash Pandas, Tyler Danish (W, 1-0) was perfect for 3.1 innings, retiring all 10 batters he faced including three strikeouts.

Pompey continued his strong night at the plate by launching a towering two-run home run down the left field line in the top of the eighth, his second of the season to double the Rocket City lead to 7-3.

Tennessee got the pair of runs right back on a two-run homer from Tyler Payne against Rocket City reliever Oliver Ortega.

The late runs continued as Izzy Wilson doubled of the wall in left to score Didder with the eighth Trash Pandas tally. It would prove to be a crucial insurance run.

In the bottom of the ninth, the Smokies again cut into their deficit on a two-run homer from Darius Hill to make it 8-7 Trash Pandas. Jordan then walked to put the tying run on base, but closer Keith Rogalla (S, 2) got the final out with a strikeout of Chase Strumpf to finish the win for Rocket City.

At the plate, Pompey led the way by going 2-for-3 with a triple, home run, two RBI, two walks, and three runs scored in the win while Cecchini went 3-for-6 with a home run and two runs scored. Martinez went 3-for-5 and Wilson added a pair of hits in the 14-hit outburst from the Trash Pandas.

Danish’s (W, 1-0) perfect relief appearance earned him the victory while Ortega and Rogalla each gave up a pair of runs but held on for the win for the Trash Pandas.