The South and Midwest aren't the only places that get tornados. 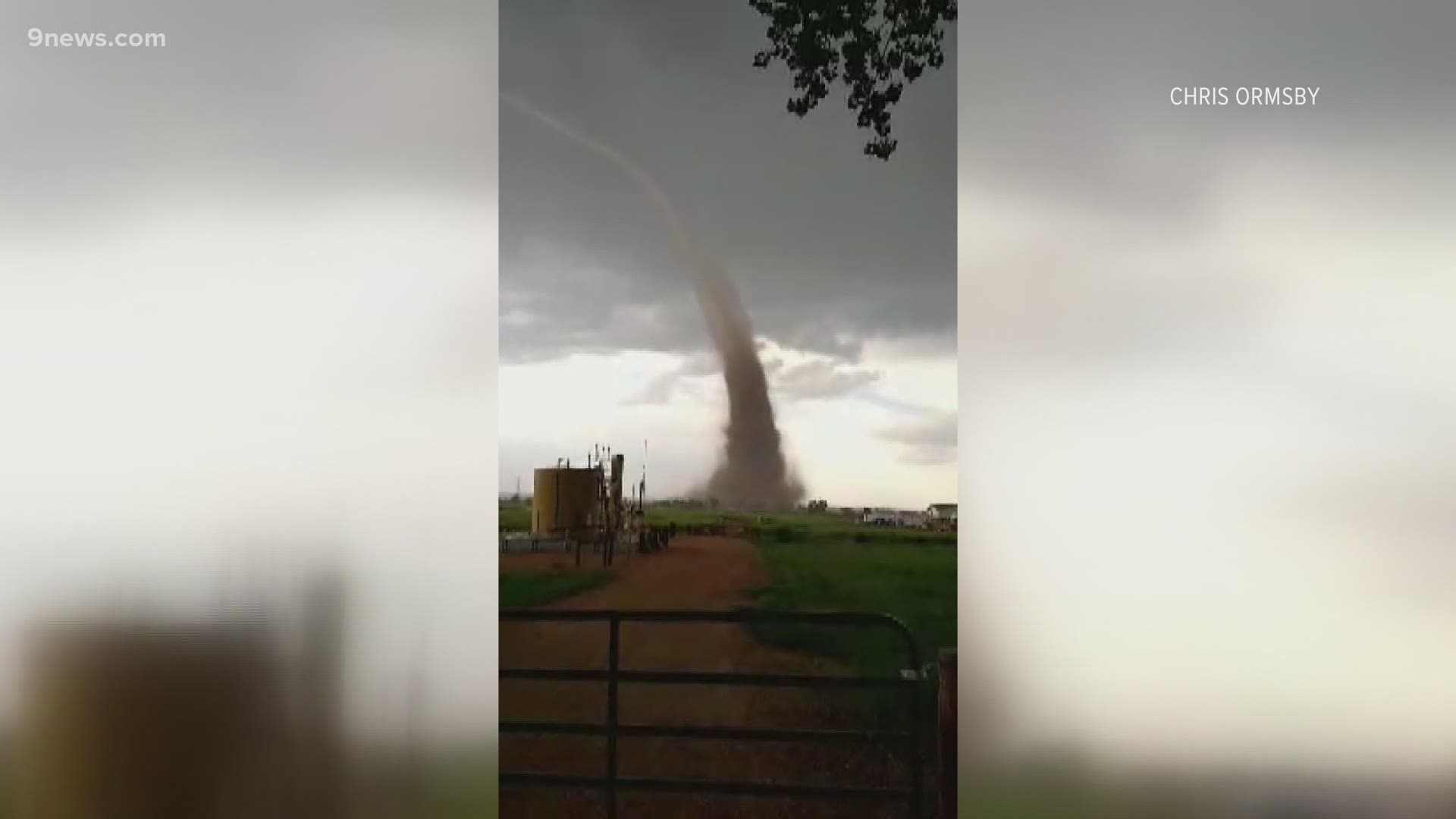 WELD COUNTY, Colo. — All tornadoes are unique in appearance, formation and location. Here are some interesting facts that stand out about Monday's Weld County tornado.

Monday’s twister was referred to as a landspout tornado. That term is actually a nickname for a tornado that forms without the help of a rotating thunderstorm.

This particular landspout tornado developed when a non-rotating thunderstorm formed over the top of some spinning air that was already present on the ground. When the storm's updraft pulled that spinning air up into the cloud base, it became a tornado.

On Monday, there was a slight convergence of winds in southwest Weld County that might have created the spinning column of air. That column is actually horizontal to the ground at first, then gets stretched vertically by the storm updraft.

There was additional vorticity added to that column by an outflow boundary moving in from some other thunderstorms that popped to the east of Denver International Airport (DIA).

The real term for that is a non-supercell tornado, or a mesocyclonic tornado.

Some witnesses said the tornado looked more like a supercell tornado because of the lowering and the location near the main updraft. After a landspout connects to a cloud-base, there will sometimes be a lowering, and that lowering can also be spinning, but that does not make it a supercell tornado.

The key is that the storm was a non-rotating storm when the tornado first formed, and that's what made it a non-supercell tornado.

A tornado warning was issued on the storm only after the tornado was spotted on the ground. This is an unfortunate trait to all landspout tornadoes. There is no warning prior to tornado formation.

The reason for that is that a landspout tornado is not in the thunderstorm until after it forms.

The radar that National Weather Service (NWS) meteorologists use to scan storms for rotation cannot see landspout tornadoes until a few minutes after they form. It is usually quicker to get an eyewitness report of the tornado on the ground, than it is to wait to see it on the radar.

A supercell tornado can be seen on the radar eight to 18 minutes before it becomes a tornado because it develops in the thunderstorm and works its way down to the ground.

This is not actually a statistic that is kept in the record books, but it's one of the tallest in recent memory.

The NWS estimates it was more than 10,000 feet high, which means nearly five million people on the Front Range of Colorado could have seen it, from as far as 70 miles away.

9NEWS got reports from Golden, Parker, Kiowa, and Aurora.

Looks like this is going to be a single landspout tornado on the ground from roughly 30 minutes. Started north of Firestone around 5pm and tracked northeast towards Platteville. Some EF-1 type damage reported. NWS will do a survey tomorrow. #9wx 📷: James Wallace pic.twitter.com/5JAXyA228d

They also officially rated the tornado an EF-1 on the Enhanced Fujita Scale. The typical threshold for an EF-1 is 110 mph. Crews use damage indicators to estimate wind speed.

About 90% of Colorado tornadoes are EF-1 or weaker.

Most landspout tornadoes are very small at the base, usually just 50 to 100 yards wide.

Monday’s tornado appeared to be wider than that in many pictures and videos, but the official survey team estimated that it was only 50 yards.

The tornado hit a few big patches of dirt that made the bottom of the tornado appear much larger than it actually was. The measurement came from the actual vortex that was in contact with the ground and not the circumference of the dust plume.

Credit: Ryan Masch
View of tornado from Platteville, Colorado -- Dirt swirl made the tornado appear wider than it actually was.

Monday's storm was on the ground for 35 minutes. It first touched down near the KP Kauffman plant at County Rd 19 and 22, which technically has a Fort Lupton address.

Then it tracked northeast for 7.5 miles and dissipated to the northwest of Platteville at 5:35 p.m.

There was only one tornado that formed Monday. Usually, when there is a spinning boundary on the surface, multiple storms pop up and pull up multiple tornadoes. Either the boundary was too small or the other storms were not strong enough to stretch the air in the vertical.

Weld County in Colorado gets more tornadoes than any other county in America, and that legacy continues. Because there was another Weld County tornado in May, this tornado was number 293 since 1950.

Here is a map of tornadoes by county in Colorado over the past 71 years. Weld County has the most tornadoes out of any county in the U.S. The vast majority of tornadoes touch down east of I-25 but can occur at higher elevations as well. #SevereWeatherAwarenessWeek #COwx pic.twitter.com/vGKdoGWrRh

RELATED: Getting emergency alerts to Colorado cell phones is an imperfect system