From the pandemic to violent political division, it's hard to find many historic parallels to explain what President Elect Joe Biden faces on Wednesday. 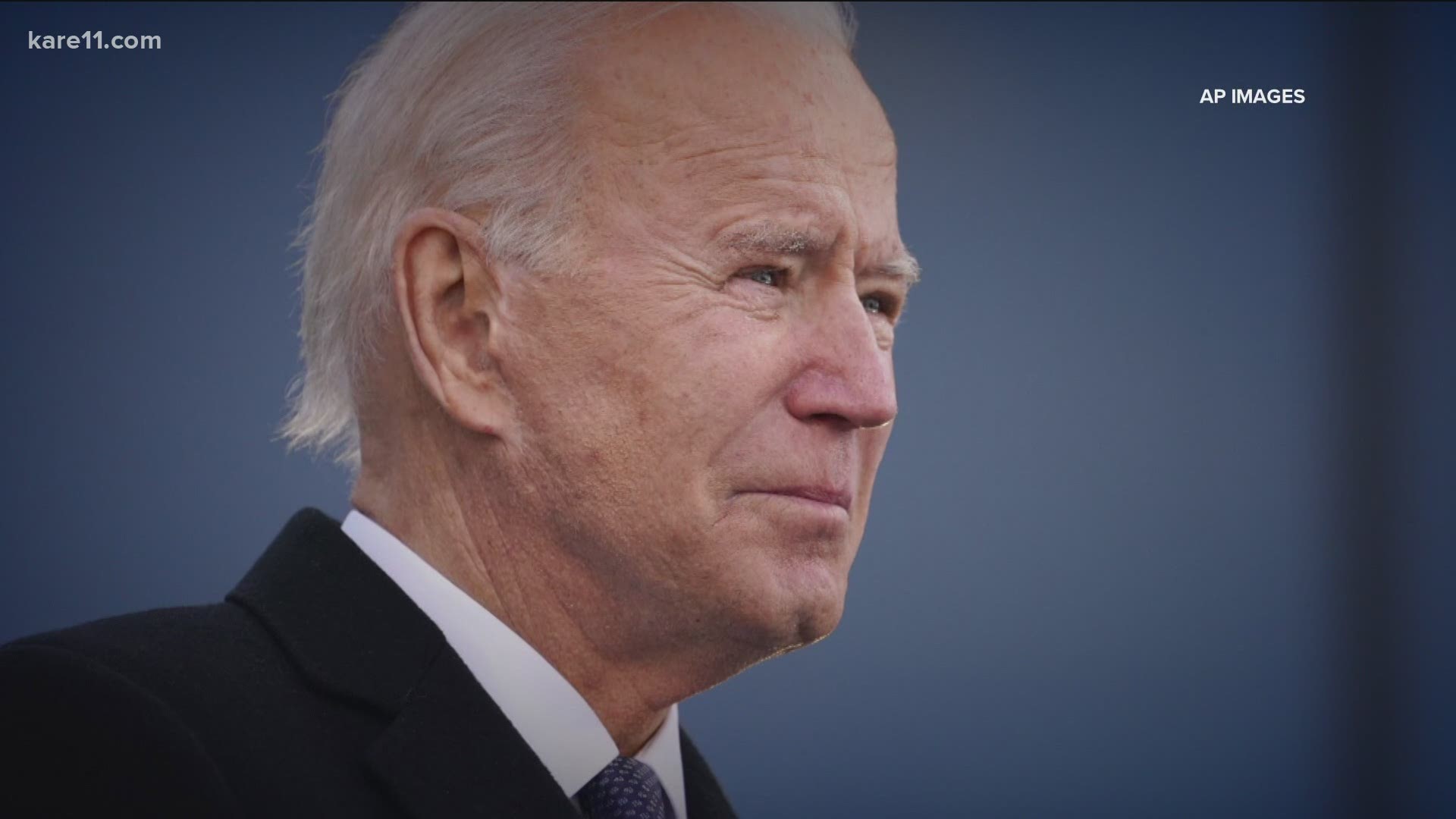 MINNEAPOLIS — We already know the Inauguration of President Joe Biden will look much different than what we've grown accustomed to in recent history.

Instead of attending the events and welcoming the new first family to the White House, President Trump will leave town ahead of schedule. Instead of taking the oath of office in front of a national mall packed with spectators, President Biden will overlook 200,000 flags, representing the Americans who won't be able to travel due to the pandemic. Those who are in attendance, will be outnumbered by up to 25,000 troops standing guard following the violence that took place at the Capitol just two weeks prior.

University of Minnesota Political Science professor, Tim Collins, says it's still hard to comprehend that the very basic principle of a peaceful transition could still be in question just hours before an Inauguration.

"It's more close to peaceful than violent, but it's not perfectly peaceful," Collins said. "If I were to see it in another country, I don't know if I would consider this to be a peaceful transition of power. There are literally armored troops supervising most square footage of the US Capitol and the surrounding acreage. That doesn't seem peaceful, especially in the aftermath of the insurrection."

Kent Erdahl: "Is there any Inauguration comparable to this one?"

Collins: "The only parallel is pre-Civil War. Lincoln's first (Inauguration) in the lead-up to family against family. That's the only thing that comes tangibly close."

Between Lincoln's election in 1860 and his inauguration in 1861, seven states had succeeded. Lincoln was surrounded by heavily armed cavalry and infantry throughout his procession to the Capitol and oath of office, but he was also addressing a country already on the brink of war.

Collins says President Elect Biden should have a much better opportunity to unite the country around a common goal.

"You would think it would be an easy task to say we should stop coronavirus," Collins said. "We should stop this terrible pandemic. That should be a common goal that I would hope that he puts forward, because that's the one thing that we should all be able to agree on, so at least Biden has that advantage over Lincoln. But even then, that's such a low bar, that how much worse can you get?"

For a more inspirational example, Collins says Biden could look to FDR's first inauguration, and how he rallied the country on the heels of the great depression, but he says the political circumstances back then were much more favorable for FDR.

"He had a broad coalition of Americans behind him," Collins said. "The New Deal Coalition, as they became known, pushed for things like public works programs and massive expansion of, not just government, but the social safety net to better provide for people during an economic catastrophe."

Collins says Biden's best hope to build his own coalition begins tomorrow, when he has the stage all to himself. He says it's a critical moment because he says divisions now are amplified like never before.

"We are so fragmented in our media viewpoints, or our media diets, that we don't have the same set of underlying facts to a point that it's impossible to really understand," Collins said. "Ideally, a direct speech from the President that gets covered, really without filter, is the best way to hopefully bridge that gap."