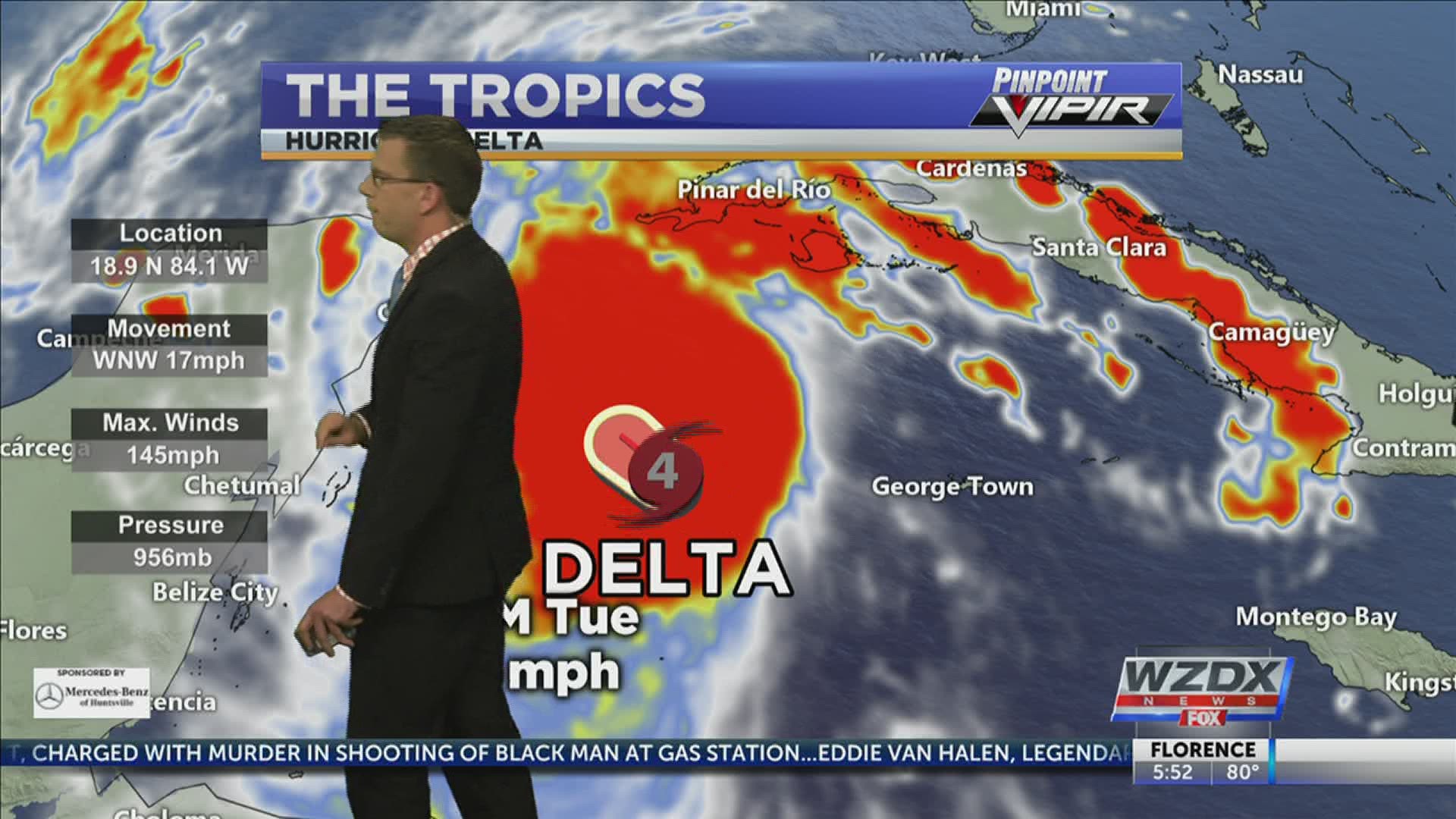 HUNTSVILLE, Ala. — Just because we've run out of names, doesn't mean we're done with the 2020 Atlantic Hurricane Season. On the contrary, the season continues to break records. Delta is currently the strongest Greek name storm on record.

Hurricane Delta is a monster category four hurricane with sustained winds of 145mph and a minimum central pressure of 956mb. The massive storm will first make landfall near Cozumel and Cancun before entering the Gulf of Mexico.

“As our coastal areas are still recovering from Hurricane Sally, another system, Hurricane Delta, is making its way toward the Gulf Coast and could potentially have a significant impact on Alabama.

Therefore, I signed a State of Emergency to begin Alabama’s preparation process and position us to be able to declare a pre-landfall disaster declaration with FEMA.  As residents along the Gulf Coast know all too well, these storms are unpredictable, and I strongly encourage everyone to take Hurricane Delta seriously. We are keeping a close eye on this approaching storm and we will continue providing all necessary updates.”

Later Monday Governor Ivey added a mandatory evacuation to the State of Emergency. “Earlier today, I signed a State of Emergency to begin Alabama’s preparation process and position us to be able to declare a pre-landfall disaster declaration with FEMA. Additionally, I am issuing a mandatory evacuation for all tourists and visitors who are currently visiting or planning to visit our coastal communities of Orange Beach, Gulf Shores, Dauphin Island and the unincorporated area of Fort Morgan.

The mandatory evacuation begins Tuesday Morning. “Unless you are a local resident with a hurricane pass or have a pass or decal that has been issued to contractors, property management or other businesses working in response to Hurricane Sally, this mandatory evacuation notice should help us prepare for the worst, even as we hope for the best.”

Delta is not expected to make landfall until later Friday afternoon or maybe even the evening. The track has also been shifting to the west a bit in recent runs. With the strongest part of a hurricane being the right front quadrant, the Alabama Coast would still see significant rain and wind despite the center of the storm being further west.

Current model runs are also trying to keep the highest rain totals to the west. right now the highest totals would be across Mississippi, Arkansas, and Louisiana.

There are still a ton of questions of the track of Delta and things are likely to change.

Hurricane Delta is a monster category 4 storm with sustained winds of 145mph. The storm could make landfall along the coast Friday as a strong category 3 storm.

As it stands right now, the Tennessee Valley is expected to get heavy rain and wind Late Friday, through Saturday and portions of Sunday. If we can destabilize enough, then severe weather would be a possibility Saturday afternoon.