Blizzard conditions possible in the Northeast as nor'easter bears down

A storm system will lash parts of the Northeast into the middle of the week with a slew of different hazards. 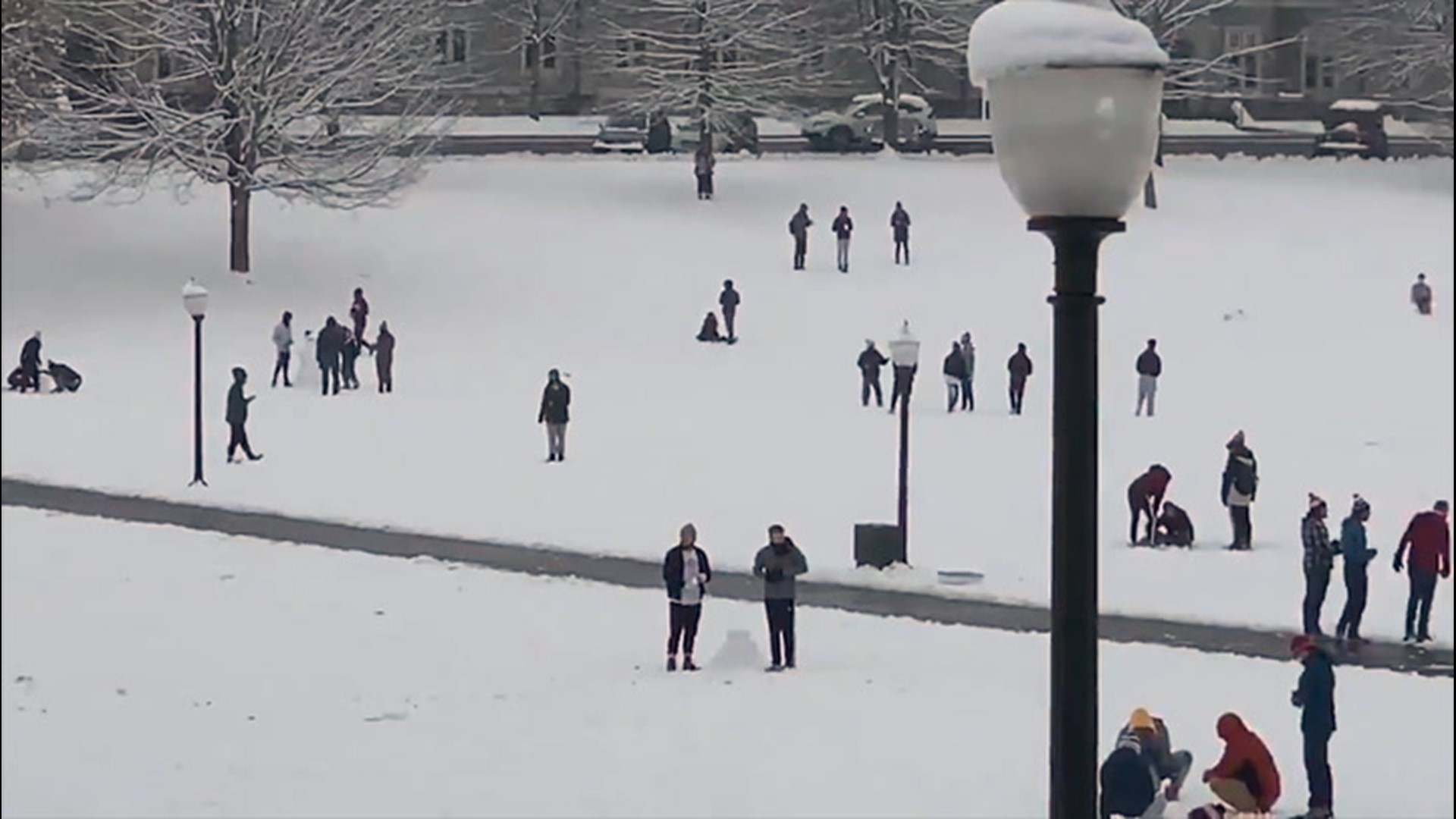 A powerful nor'easter took shape off the mid-Atlantic coast on Sunday night. Forecasters say to "buckle up" as the winter storm will be a long-duration event for some areas and unload an AccuWeather Local StormMax™ of up to 36 inches. The system will lash parts of the Northeast into the middle of the week with a slew of different hazards.

Winter storm warnings and winter weather advisories were in effect across the Northeast as snow and ice began breaking out across the region Sunday.

By early Monday morning, 2-5 inches of snow had fallen across a broad swath stretching from the southern Appalachians to eastern Pennsylvania and central New Jersey. Higher amounts were observed in the mountains of North Carolina, Virginia, West Virginia and Maryland.

This first wave of snow was a result of a storm that swept through the Midwest and Ohio Valley over the weekend, unleashing major disruptions in places like Chicago. This storm has since been in the process of weakening.

But, as AccuWeather meteorologists predicted days ago, a secondary storm was beginning to take shape off the southeastern coast of Virginia Sunday night.

"The coastal storm will then become the dominant storm of the two, strengthening into a full-blown nor'easter along the Atlantic coast," AccuWeather Senior Meteorologist Danny Pydynowski said.

As the two storms interact with one another, a broad area of snow will stretch from the Ohio Valley and southern Appalachians to the mid-Atlantic and New England.

Some locations in the Ohio Valley and central Appalachians, where snow created slippery travel on Sunday, can expect rounds of snow to last all the way into Monday night. In much of the mid-Atlantic, the storm is forecast to extend into Tuesday. Part of New England will face storm impacts into early Wednesday.

"This will allow for snowfall totals to really build up over large areas of the Northeast," Rossio explained, adding that there could be an expansive area of 6-12 inches of accumulation.

"Even though the forecast is for nearly a foot of snow in some of these interior areas, it could be a little misleading in terms of what impacts to expect," AccuWeather Senior Meteorologist Kerry Schwindenhammer said. "With the gradual nature of the accumulation in many of these areas, clean-up crews may be able to 'keep up' in a relative sense."

However, closer to the coast, forecasters warn it will be a much different story. "It will be very different near the coast," as this region is expected to get hammered by the heaviest snowfall, Schwindenhammer said.

Related video: Taking a snow day in the nation's capital 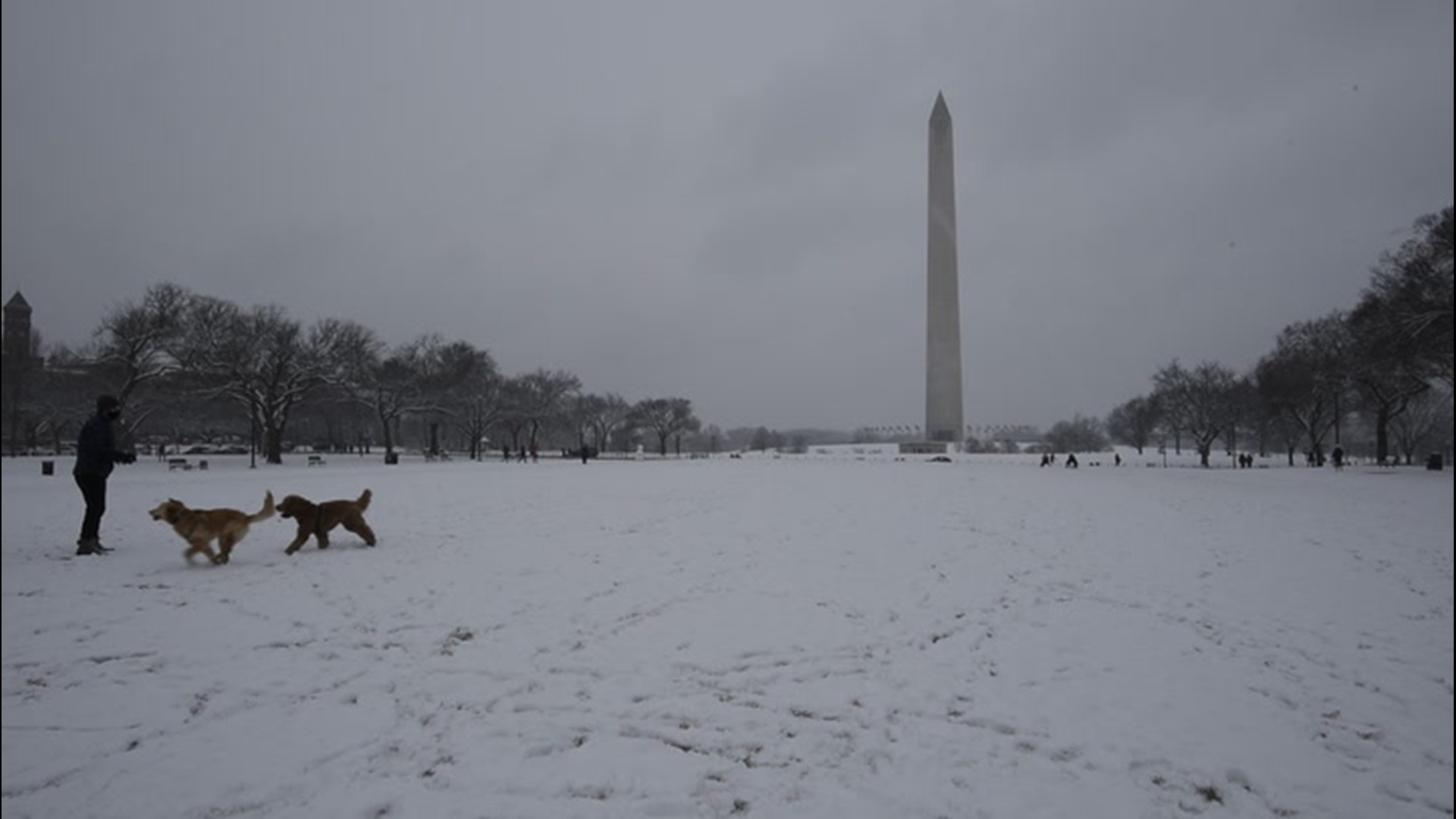 Pydynowski compared the predicted storm impacts for inland areas to coastal locations to the fable of The Hare and the Tortoise. "Many areas farther inland will be like the tortoise, slowly but steadily building up impressive snowfall totals. Coastal areas will be like the hare, with impressive snowfall totals piling up very quickly. We'll see who ultimately wins the race and sees the highest report."

AccuWeather meteorologists expect widespread snowfall totals of 12-18 inches where the heaviest snow falls. A bullseye of nearly 2 feet could target a small area just north and west of New York City, into the Pocono and Catskill mountains, with an AccuWeather Local StormMax™ of 36 inches.

The densely populated Interstate 95 corridor in the Northeast will be in the thick of the winter storm. Sunday snow led to slushy roads and slippery travel in the Washington, D.C., and Baltimore metro areas. Around 2-4 inches of snowfall had been recorded in these cities by Sunday night, with similar amounts farther northeast in Philadelphia.

As the snow begins to fill in statewide, keep in mind driving conditions can change rapidly. Limit travel if you can. Keep your headlights on for visibility. #snowmd #MDOTsafety pic.twitter.com/9bzXvwkjJD

Snow will continue to gradually spread northeastward into New England through Monday.

The first flakes began to fly in New York City on Sunday evening, with snowfall intensity quickly ramping up and visibility being reduced to one-quarter of a mile at times. Boston is expected to get in on the action later Monday morning.

Snowfall rates will be much heavier near the coast, closer to the center of the powerful nor'easter. Snowfall rates could reach 1-2 inches per hour along the I-95 corridor from New Jersey through New England. There could also even be the chance for some thundersnow.

AccuWeather meteorologists expect New York City to see a major snowfall from this event, somewhere in the 10- to 15-inch range. Boston will also see significant snowfall from the storm, about 6-12 inches, even if there is some mixing for a brief time.

Some milder air higher in the atmosphere could cause precipitation to change to a wintry mix, including sleet, then perhaps rain near the coast. This scenario is most likely near Cape Cod as well as along the upper mid-Atlantic coast.

This mix of sleet, freezing rain or even plain rain can occur in places such as Washington, D.C., Baltimore and Philadelphia for a time into Monday, before colder air wraps in behind the storm and brings a return of all snow, and perhaps a few more inches of additional accumulation.

Along with the significant snowfall, powerful winds will develop near the coast. Wind gusts of 30-50 mph, with an AccuWeather Local StormMax™ of 65 mph, will create blizzard conditions at times. Travel in areas from Trenton, New Jersey, to New York City to Boston could become nearly impossible during the height of the storm into Monday night.

The strong winds blowing onshore will also lead to some coastal flooding and beach erosion from the rough surf it will generate. Localized power outages will also be possible where the strongest gusts occur from any downed tree limbs or power lines.

As the storm reaches peak strength Tuesday just off of the New England coast, the heaviest snow will also begin to shift off into northern New England and Atlantic Canada. However, lingering areas of light-to-moderate snow will still plague the Northeast and the wind field will also expand.

"Much of the snow that piles up in interior areas will not be accompanied by much wind through Monday," Rossio said. "However, on Tuesday, areas all the way through the mid-Atlantic into the western Ohio Valley will see a gusty breeze develop."

This will prolong impacts from the storm in these parts by creating areas of blowing snow. "Much of the snow that falls across these areas will become light and fluffy by the end of the storm, so any wind will be able to blow it around pretty easily," Rossio added.

Travel delays along major thoroughfares like interstates 90, 81, 80, 76 and 70 could be extended through Tuesday with blowing snow recovering plowed roads in open areas. Farther east in the mid-Atlantic and Northeast, some issues with blowing snow could persist all the way into Wednesday.

"It really won't be until Thursday, when high pressure briefly moves in ahead of the next storm forming in the central U.S., until folks in the Northeast will really be able to put a wrap on this nor'easter," Rossio said.