The Pathfinder Space Shuttle Exhibit at the U.S. Space & Rocket Center is being restored

The restoration of the exhibit was put off due to the pandemic and is said to take many years to finish. The Pathfinder is considered an American Treasure. 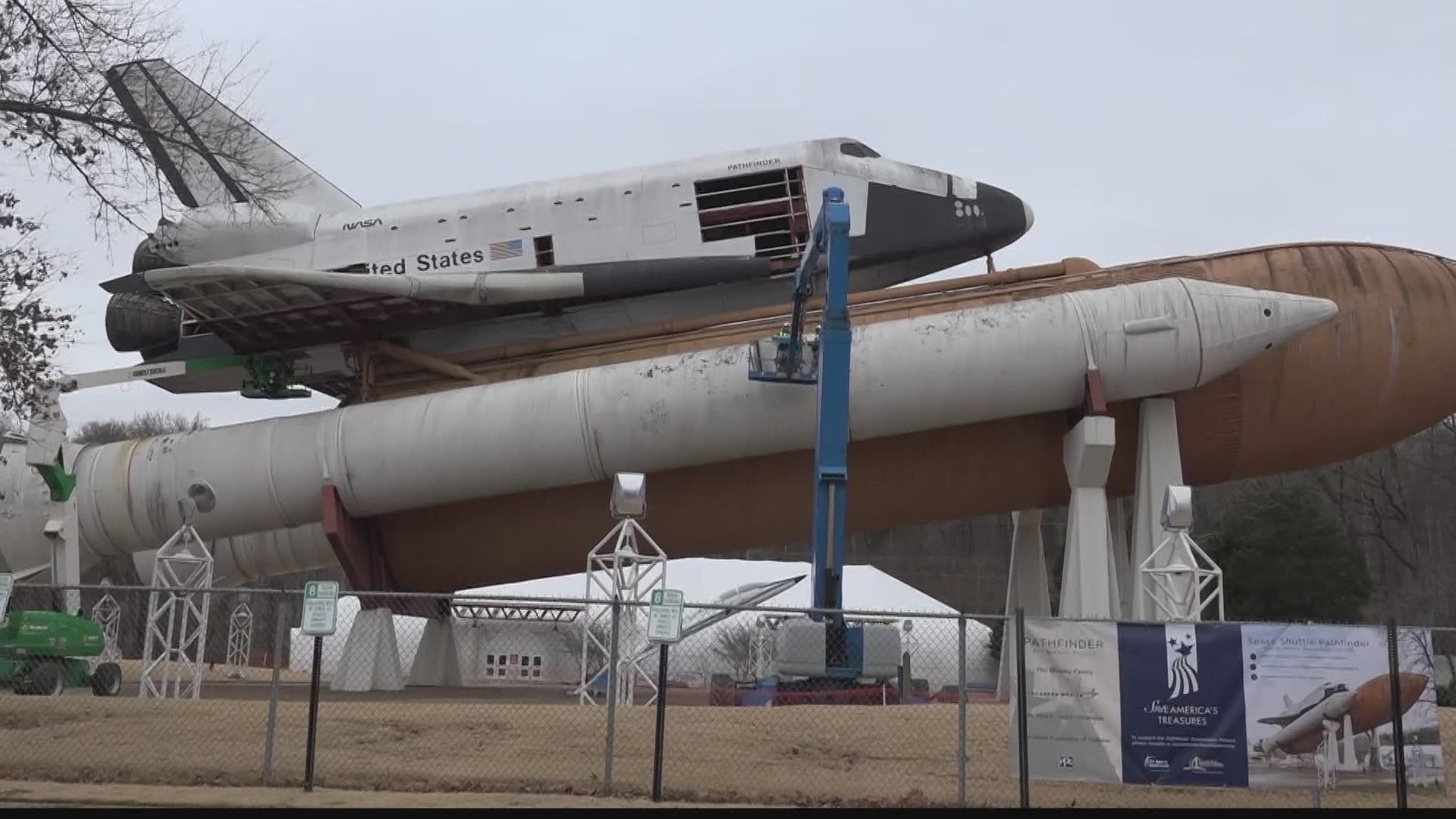 HUNTSVILLE, Ala — The multi-year restoration project of the Pathfinder Space Shuttle display, located in the Rocket Center's shuttle park, is now in phase one.

This phase of restoration will include removing the Pathfinder orbiter from the top of the external fuel tank.

Restoring the Pathfinder was supposed to be a top priority for the year 2020, but due to financial reasons and reduced attendance to the museum, both caused by the COVID-19 pandemic, they had to put the project on hold.

In August, the Rocket Center received a $500,000 "Save America’s Treasures" grant from the National Park Service alongside many other donations to make the project possible.

"In the early 1980s, a group of Japanese businessmen paid to modify the structure with plywood and fiberglass to more closely resemble a real orbiter and displayed it from 1983 to 1984 at an exposition in Tokyo, Japan. After the expo, Pathfinder returned to Huntsville and was mounted for the display seen today. More than 30 years of exposure to the elements have caused the modified elements to deteriorate, resulting in the need to bring the orbiter down," according to the U.S. Space and Rocket Center.

"I think about the Huntsville community and how many people in this town worked on this program, or had a relative, or a neighbor who worked on this program, it's part of Huntsville's DNA, and as Huntsville is growing and changing and becoming, you know, an international city, it's important to remember that this town has always had such a technological drive," said Dr. Kay Taylor, the VP of education at USSRC.

RELATED: City of Huntsville to continue work on infrastructure for U.S. Space Command

Here is some of the basic information about the Pathfinder:

The Pathfinder shuttle stack is an outdoor static display of the early Space Transportation System (STS), also known as the Space Shuttle Program.

The Pathfinder display consists of the following primary historic elements:

· Pathfinder Orbiter – Though highly modified, the Pathfinder orbiter is a winged test article used to verify fitment of handling and transport equipment, train staff on handling procedures and post-flight defueling procedures for the orbiters maneuvering engines.

· Fiber-wound Composite Solid Rocket Boosters (SRBs) – A pair of prototypes, super-lightweight SRBs developed for STS launches from Vandeberg Air Force Base in California. This SRB program was discontinued after the loss of the Challenger vehicle in 1986.

· Space Shuttle Main Engines (SSMEs) – The three engines mounted on the back end of the orbiter are a trio of program used engine nozzles and combustion chambers. The top engine was flown on STS-1, the first shuttle flight, while the bottom two were engineering development engines.

Specifications for the stack:

Information provided by the USSRC.