With only a few exceptions, NASA’s Apollo-era Mission Control has been restored to the way it looked 50 years ago when two men landed on the moon. 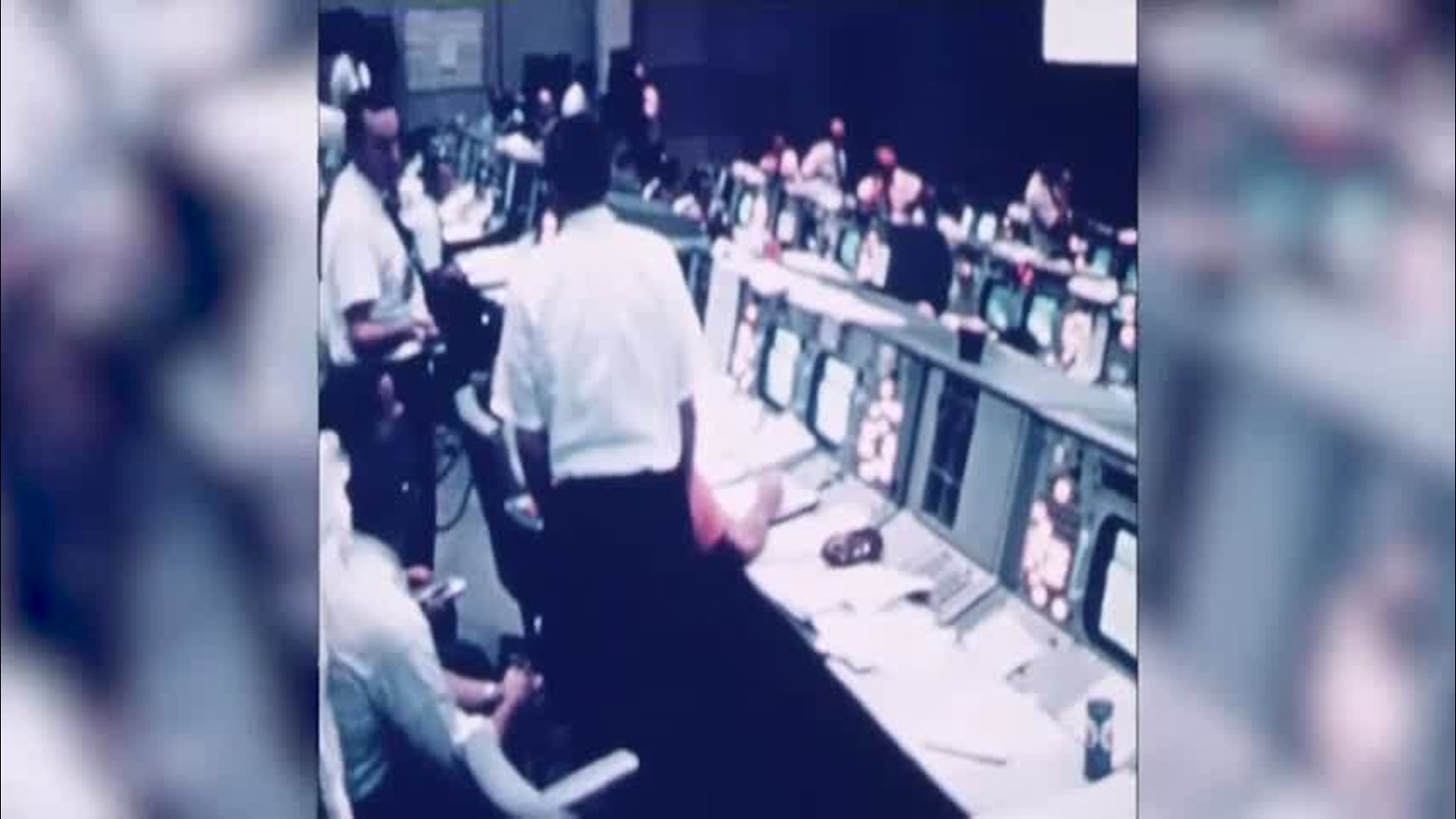 HOUSTON (AP) — Gone is the haze of cigarette, cigar and pipe smoke. Gone are the coffee, soda and pizza stains. With only a few exceptions, NASA’s Apollo-era Mission Control has been restored to the way it looked 50 years ago when two men landed on the moon.

It gets the stamp of approval from retired flight director Gene Kranz, a man for whom failure — or even a minor oversight — is never an option.

Seated at the console where he ruled over Apollo 11, Apollo 13 and so many other astronaut missions, Kranz pointed out that a phone was missing behind him. And he said the air vents used to be black from all the smoke, not sparkly clean like they are now.

Those couple of details aside, Kranz could close, then open his eyes, and transport himself back to July 20, 1969, and Neil Armstrong and Buzz Aldrin’s momentous moon landing.

“When I sit down here and I’m in the chair at the console … I hear these words, ‘Houston, Tranquility Base here. The Eagle has landed,'” Kranz said during a sneak preview at NASA’s Johnson Space Center.

With all the empty seats, the room reminds him of a shift change when flight controllers would hit the restroom.

“It’s just nice to see the thing come alive again,” said Kranz, who titled his autobiography, “Failure is Not an Option.”

Friday’s grand opening — just three weeks shy of the 50th anniversary of humanity’s first otherworldly footsteps — culminates years of work and millions in donations. It opens to the public Monday.

The goal was “to capture the look and feel of July of ’69,” said NASA’s restoration project manager Jim Thornton.

“The place is designated a National Historic Landmark,” he said. “It’s not for the brick and mortar of the building, it’s for the amazing feats that happened inside of the building.”

Johnson’s historic preservation officer, Sandra Tetley, strove for accuracy. Her quest began in 2013, after the room had fallen into neglect. It was last used for space shuttle flights in the 1990s, then abandoned and opened to tourists.

The restoration effort finally got traction in 2017. The room was closed, and construction began. More than $5 million was raised, most of it donations. The city of Webster across the street kicked in $3.5 million.

Tetley and her team interviewed flight controllers and directors now in their 70s and 80s. They pored through old pictures and brought in specialists in paint, wallpaper, carpeting, electricity and upholstery. Original swatches of carpet and wallpaper and an original ceiling tile turned up.

Intent on authenticity, they scoured eBay and vintage shops for ashtrays and cups and turned to 3D-laser printing to recreate lids for the back-of-the-seat ashtrays in the glassed-in visitors’ section overlooking the control room. Old binders for reams of paper were collected. Seat cushions were handwoven. Ceiling tiles were hand stamped.

This July 20, 1969 photo made available by NASA shows the Mission Operations Control Room (MOCR) in the Mission Control Center (MCC), Building 30, during the Apollo 11 lunar extravehicular activity (EVA). The television monitor shows astronauts Neil A. Armstrong and Edwin E. Aldrin Jr. on the surface of the moon. (NASA via AP)

Carpeting was custom ordered with special tufting and extra yarn, then cut into 28-inch squares. The restoration team wanted a lived-in look for the carpet and chose a shade reflecting years of nicotine discoloring.

And yes, Kranz got his missing rotary-dial wall phone.

“I fought for everything,” Tetley said. “But we’re getting everything we want to make it just completely historically accurate.”

The green consoles were trucked to the Cosmosphere museum in Hutchinson, Kansas, for months of rehab. Cigarette butts were dug out of the consoles, along with gum wrappers and papers.

Modern LED lights and flat screens were installed to bring the consoles alive with images and flashing buttons; big screens up front will show key footage from the Apollo 11 mission.

With the International Space Station’s Mission Control running 24/7 one floor down and work for future moonshots going on all around, Thornton said it was challenging to create a museum. But the painstaking work paid off. Some Apollo flight controllers were so moved at seeing the restored room that they teared up.

“Then we know that we’ve done it right,” Tetley said.

A screen displays simulated telemetry data on the the console for the Booster Systems Engineer, the first position on the first row known as &#8220;The Trench&#8221;, inside the Apollo mission control room as it is restored to replicate the Apollo mission era for the 50th anniversary of the Apollo moon landing at the NASA Johnson Space Center Monday, June 17, 2019, in Houston. (AP Photo/Michael Wyke)

There’s one artifact, though, that doesn’t fit July 1969. Following their 1970 aborted moon-landing mission, Apollo 13’s Jim Lovell, Fred Haise and Jack Swigert presented a mirror from their spacecraft to Kranz and the rest of the control team. Ever since, the mirror had hung on a plaque above the room’s water fountain “to ‘reflect the image’ of the people in Mission Control who got us back!” Removed during the restoration, it’s now back in its original spot.

Kranz, 85, still looms large in the hot seat, where he oversaw the Eagle’s landing.

“It was just absolutely our day, our time, our place,” he said.

The flight controllers meet every year to celebrate the day, although their numbers are dwindling.

They’re proud to have helped resuscitate their Mission Control: “Part of our legacy we’re going to leave for the next generation.” 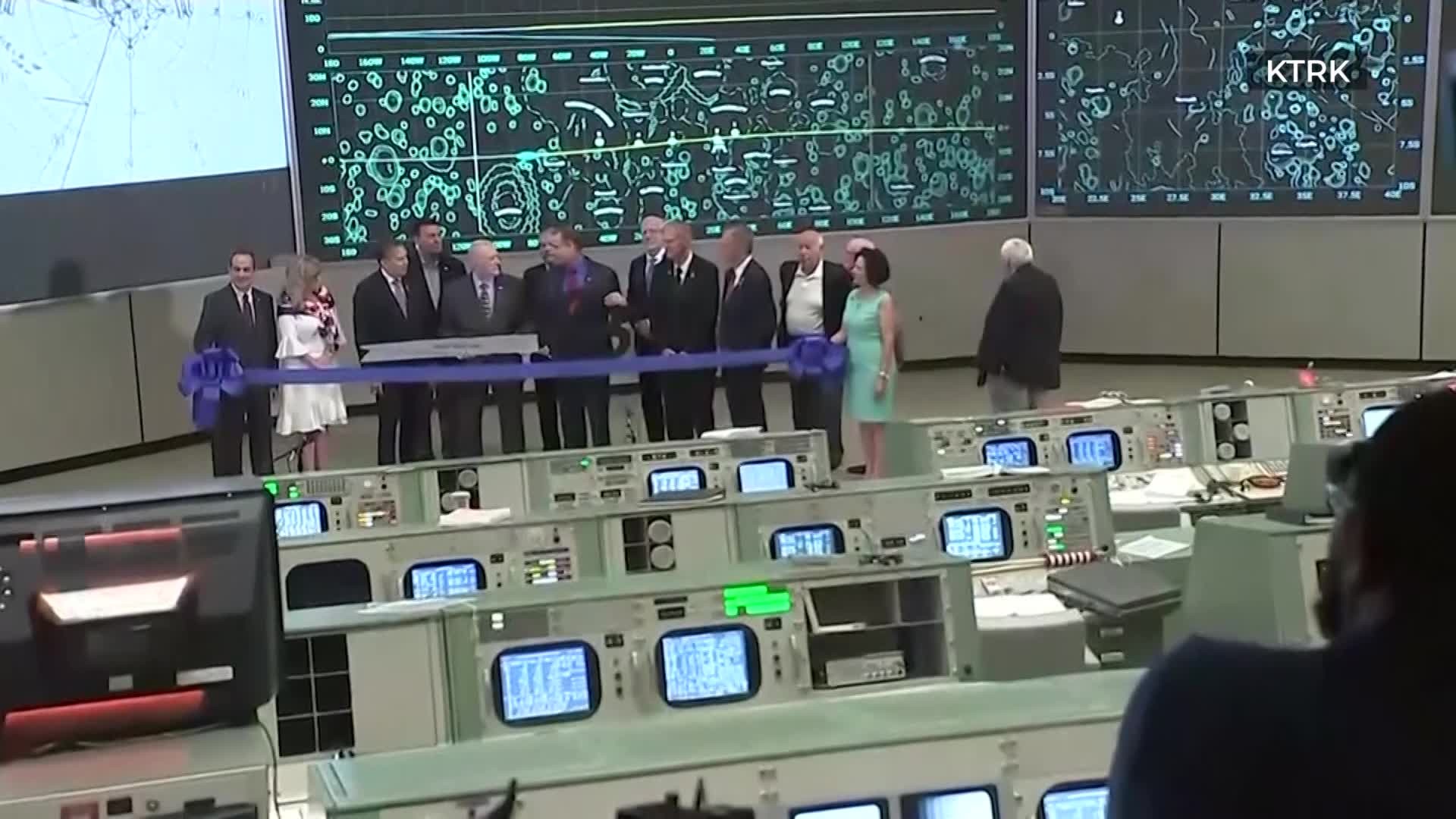 Follow AP’s full coverage of the Apollo 11 anniversary at: https://apnews.com/Apollo11moonlanding