The year began with a development in the space race. On 16 January 1969, the Soviet spacecraft Soyuz 4 successfully docked with its companion craft Soyuz 5. Two... 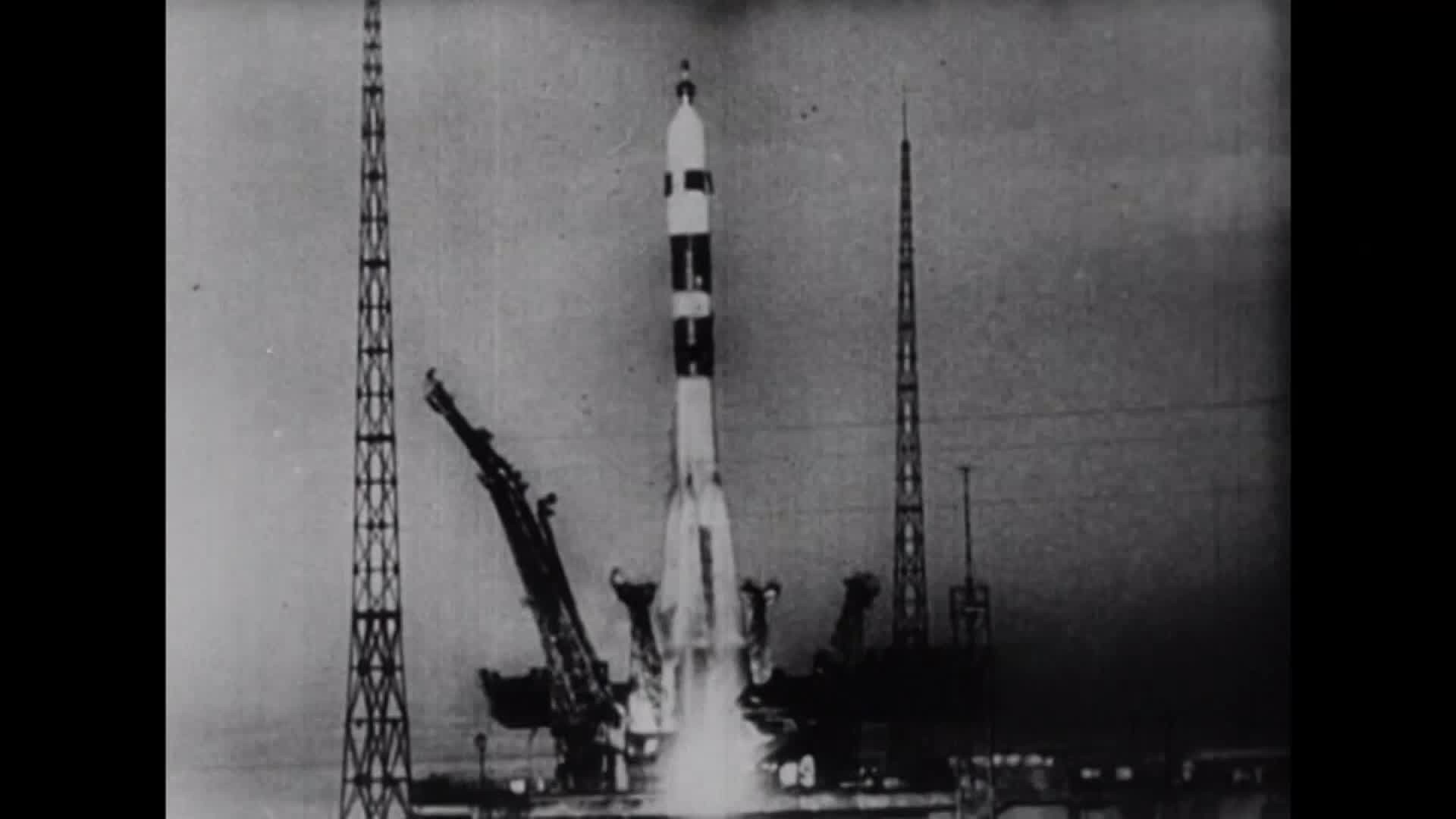 The year began with a development in the space race.

On 16 January 1969, the Soviet spacecraft Soyuz 4 successfully docked with its companion craft Soyuz 5.

Two cosmonauts transferred from Soyuz 5 to Soyuz 4 via a spacewalk, while the two craft were docked together, the first time such a transfer took place.

The docking, which Russian sources described as “the world’s first experimental space station” was televised to the Soviet Union.

In another technology triumph, the home of French and European aeronautical industry, Blagnac on the outskirts of Toulouse, was the site of the first Concorde flight in March 1969.

Meanwhile in the US there was a transfer of presidential power – on 20 January 1969 Richard M. Nixon was inaugurated as the 37th President of the United States.

In 1969 there was growing discontent in the US with the failing war in Vietnam.

Years of heavy US bombing and an intense ground war were inconclusive.

After the January 1968 Tet offensive by North Vietnam and the Viet Cong, US casualties mounted, atrocities like the My Lai massacre of hundreds of civilians were exposed, and anti-war sentiment grew at home.

Newly elected US President Nixon announced a “Vietnamization” policy of an ever-increasing combat role to South Vietnamese troops, allowing the pullout of US forces in June 1969.

US forces began a slow withdrawal that year.

The largest-ever demonstration in Washington, according to National Park Service crowd estimates, was an anti-Vietnam protest in November 1969 that drew 600,000.

The Paris peace accord between the U.S. and North Vietnam was signed in 1973, and the last major contingents of American troops departed that March. South Vietnam surrendered to the North in 1975.

Britain’s Prince Charles, the eldest son of Queen Elizabeth II and heir to the throne, was invested by his mother as Prince of Wales at Caernarfon Castle on 1 July 1969.

Prince Charles will celebrate his 71st birthday on 14 November 2019.

The longest-waiting heir in British history will only ascend to the throne when his beloved mother, the Queen, dies or decides to step down.

On 18 July 1969, US Senator Edward M. Kennedy’s car went off a bridge connecting Martha’s Vineyard to Chappaquiddick island and into the water.

Kennedy did not report the crash to police until the next morning.

He pleaded guilty to leaving the scene of an accident, and a judge said his actions probably contributed to her death. He got a suspended sentence and probation.

Kennedy overcame the scandal to serve nearly a half-century in the Senate. But the presidency remained out of his reach.

It was one small step for man, and one giant leap for mankind.

50 years ago, on July 20th 1969, man landed on the moon, leaving the first human footprints on its dusty surface.

Armstrong was the first one to step on the moon’s alien surface, followed by Buzz Aldrin 18 minutes later.

Manson, who died in 2017 at 83, horrified America more than a generation ago with the way he seemed to have turned young people murderously against everything their parents cherished.

That horror continued long after he had been locked up, in large part because of the demonic image that crime experts say he cultivated with his bizarre behavior and his searing, wild-eyed gaze.

Manson was convicted of orchestrating the slaughter of pregnant actress Sharon Tate and six other people over two successive August nights in Los Angeles. Prosecutors said he was trying to foment a race war.

He was sentenced to death, but that was commuted to life in prison after the California Supreme Court struck down the death penalty in 1972.

The killings contributed to the sense that the era of peace and love that seemed to reach a high point at Woodstock in the summer of 1969 was over, the dream turned into a nightmare.

On 14 August 1969, British troops were deployed in Northern Ireland to intervene in sectarian violence between Protestants and Roman Catholics.

In the 1960s Northern Ireland, with its Protestant government and security forces, maintained a peace built on inequality.

When Catholics demanded equality in employment, housing and votes, Protestant followers of the Rev. Ian Paisley confronted them, often with police backing.

In 1969, as Catholics battled police in Londonderry and Protestants attacked Catholic homes in Belfast, Britain deployed its army as peacekeepers.

Catholics turned hostile as the Protestant government used the forces chiefly to combat a newly founded Provisional IRA. This group started killing police in 1970, soldiers in 1971 and planting car bombs in 1972.

More than 3,600 died in four decades of bloodshed over Northern Ireland. Thousands more were maimed. Barely a family in the province of 1.7 million avoided scars of “the troubles.”

Despite more twenty years of relative peace, the simmering conflict still occasionally boils over into rioting, triggered by disputes over the display of British and Irish symbols and traditional Protestant parades.

Republican politicians now seeks to unite Ireland by building support in both parts of the island.

On 15 August 1969, the Woodstock Music and Art Fair opened in upstate New York.

Some 400,000 fans gathered on rolling farmland for three days of music in rural Bethel in Sullivan County.

A few days later on 17 August 1969, Hurricane Camille slammed into the Mississippi coast as a Category 5 storm that was blamed for 256 U.S. deaths, three in Cuba.

The Beatle John Lennon returned his MBE, or Member of the Order of the British Empire, medal on November 25 1969 over Britain’s stance on Vietnam and the civil war in Nigeria.

Disclaimer: British Movietone is an historical collection. Any views and expressions within either the video or metadata of the collection are reproduced for historical accuracy and do not represent the opinions or editorial policies of the Associated Press.