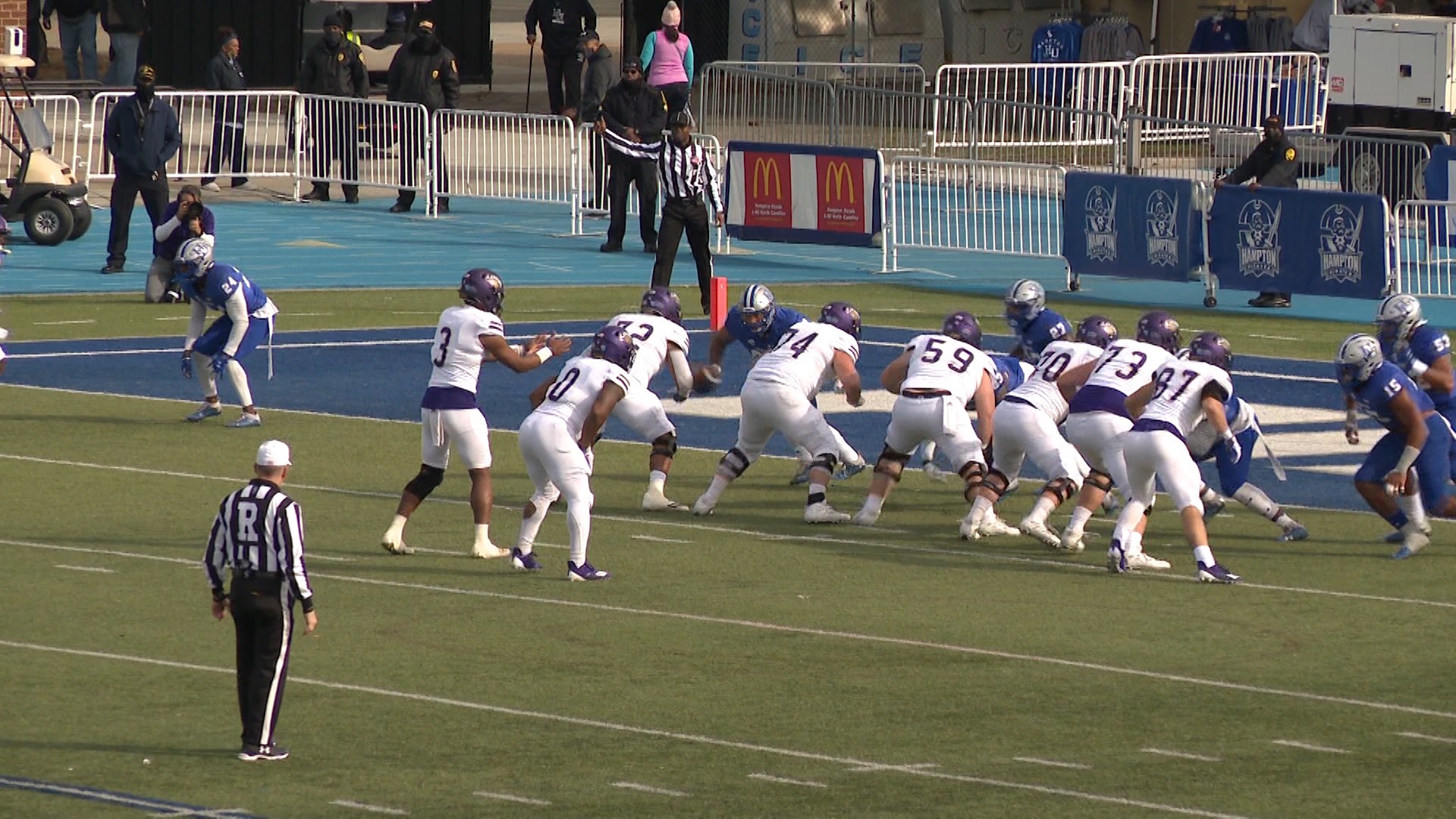 HAMPTON, Virginia — Rotating three quarterbacks and showing its opponent multiple formations, the University of North Alabama scored on four of its first five possessions, then held off a second half comeback bid from Hampton to post a 35-27 win over the Pirates at Armstrong Stadium.

The Lions built a 28-14 halftime lead and moved the ball throughout the second half, but lost two fumbles that prevented scoring opportunities and left the door open for the Pirates to battle back into the game.

Hampton pulled within a touchdown with 8:21 to play but North Alabama answered with its only score of the second half to make it 35-21 with just 3:11 left in the game.

The Pirates got a touchdown with 1:06 to play but UNA's Chase Brown blocked the extra-point attempt and the Lions recovered the onside kick to preserve the win.

North Alabama wins the final game of the season❗ Thank you Lion Nation for your support through the final season of the Division 1 transition period🦁
#RoarLions pic.twitter.com/y7k7XB8rvM

The Lions finished the season 3-8 overall and 2-4 in the Big South Conference. Hampton finished 5-6 and 3-4.

Dever led the Lions attack, going 15-of-18 for 254 yards and one score. Jalen Gipson rushed for two touchdowns and Parker Driggers had two rushing TDs.

Jaylen Gipson scored on a three-yard run and Grayson Easterlingadded the extra point to give UNA a 7-0 lead at 12:15 of the first quarter.

Hampton answered with a TD drive of its own on its first possession, and quarterback Jett Duffey scored on a four-yard run with 10:18 left in the quarter. Axel Perez tied the game with the extra point kick.

North Alabama scored on its second straight possession when Gipson capped aseven-play, 54-yard drive with a four-yard touchdown run. Easterling's PAT made it 14-7 at 6:57 of the opening period.

A Jonathan Jordan interception gave the UNA defense its first stop, but the Lions couldn't capitalize.

A second pick by Gerrell Green on Hampton's next possession set up the Lions' third score.

Blake Dever passed five yards to Corson Swan for the touchdown and Easterling's kick extended UNA's lead to 21-7 at 13:28 of the second quarter.

Keyondre White scored on a one-yard run for Hampton to close the gap to 21-14 with 6:30 left in the half.

UNA's Parker Driggers then scored on a two-yard run with 3:48 to play to put the lead back at two touchdowns. A 34-yard pass from Dever to Swan was the big play of the73-yard drive.

Hampton got the first score of the second half with just 8:21 remaining in the game on a six-yard Duffey run to make it 28-21.