The UAH men's basketball team saw another magical season come to a close on Tuesday night as the Chargers fell 89-75 to top-seeded Flagler. 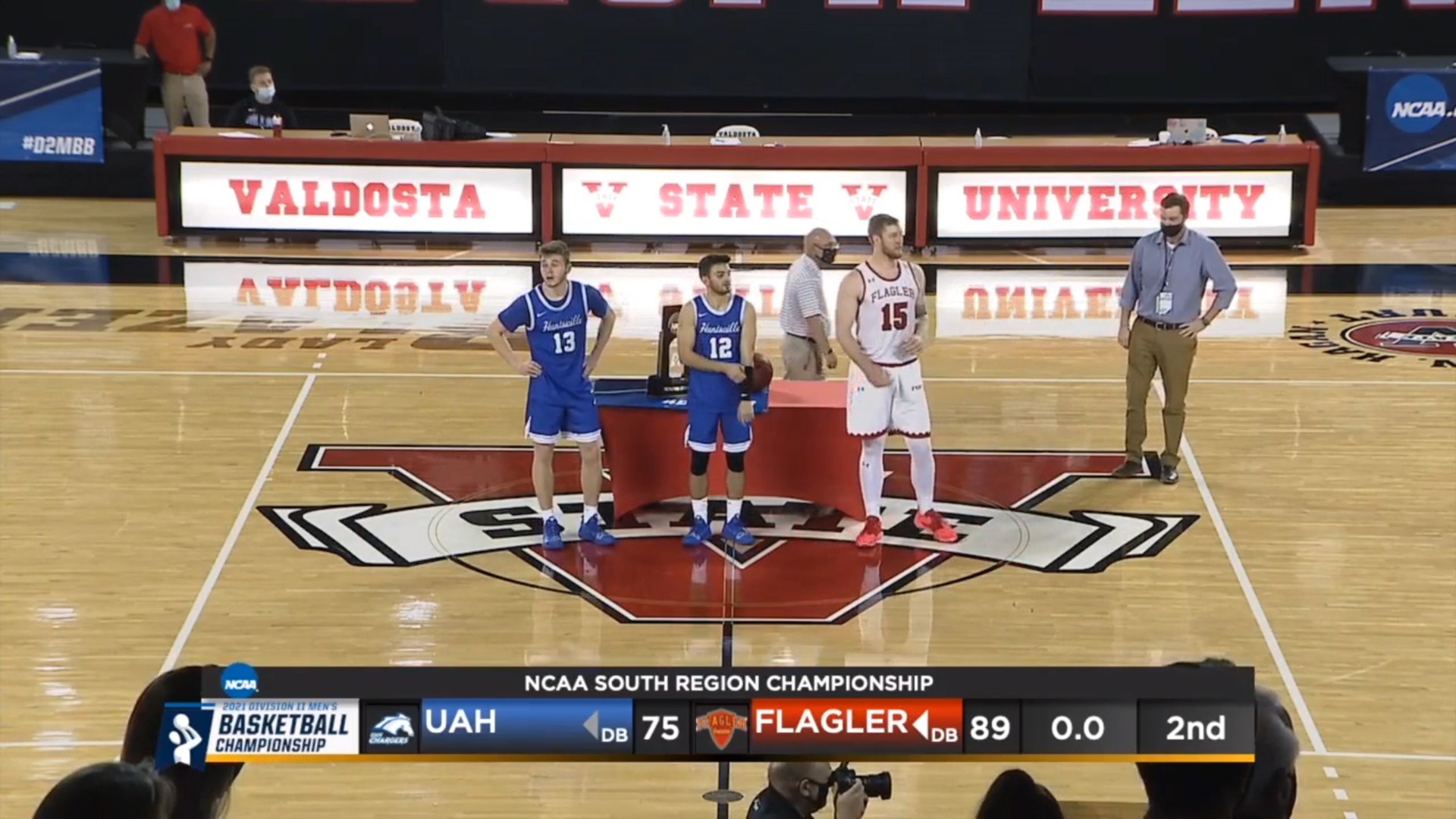 VALDOSTA, Ga. — The University of Alabama in Huntsville men's basketball team saw another magical season come to a close on Tuesday night as the Chargers – one of just 16 teams in the country left playing on this date – fell 89-75 to top-seeded Flagler in the championship game of the 2021 NCAA Division II South Regional. UAH ends its year at 15-4, while Flagler improves to 17-2 and advances to the Elite Eight.

UAH was led in the game by Sam Orf who completes a terrific senior career with a 27-point, seven-rebound, three-assist performance. Four other Chargers scored in double figures including Kerney Lane, Seth Swalve, and Max Shulman who all had 12 and JJ Kaplan who had 10.

Flagler was led by Jaizec Lottie who knocked down 10 3-pointers and scored 35.

"Sometimes you lose a game and sometimes the other team wins a game, and they won the game," said head coach John Shulman following the setback. "We battled our guts out, and we finish our season in the Sweet 16. I couldn't be more proud of our kids."

The game was closer than the final would indicate through much of the first half hour, and UAH held a 9-5 lead just over 2:30 into the contest before the Saints would go up by as many as eight in the first half on its way to holding a 34-28 lead at the halftime break.

The Chargers would have a strong start to the second half, also, with an Orf triple at the 17:42 mark pushing UAH in front 37-36, and another Orf 3-pointer gave the Blue and White a 51-49 advantage with 10:44 remaining in the game. From that point, however, Flagler would control much of the play, leading by as many as 16 on its way to the victory.

UAH shot 37.5 percent overall for the game and made 18 3-pointers, while the Saints connected on 49.1 percent of its attempts including going 17-for-40 from beyond the arc.

Chargers fall in the Sweet 16.

An incredible season, with uncommon guys.

Thank you to our six Charger Seniors for an unbelievable journey.#BeUncommon | #ChargeOn pic.twitter.com/TVtqes4Tji

The contest marks the final one in the careers of seniors Jack Kline, Lane, Kaplan Orf, Swalve, and Riley Webster – a group that went 81-29 during their time in Huntsville. But it is not the victories and the championships that will resonate with coach Shulman when he reflects on this team.

"[It's a] group of guys that you love just going to practice with," Shulman said. "A bunch of unbelievable kids who are clowns, who are great students, who are great people. This is like a once-in-a-lifetime group of kids."