Tennessee State University has hired former Titans All-Pro running back Eddie George to be their next head coach. 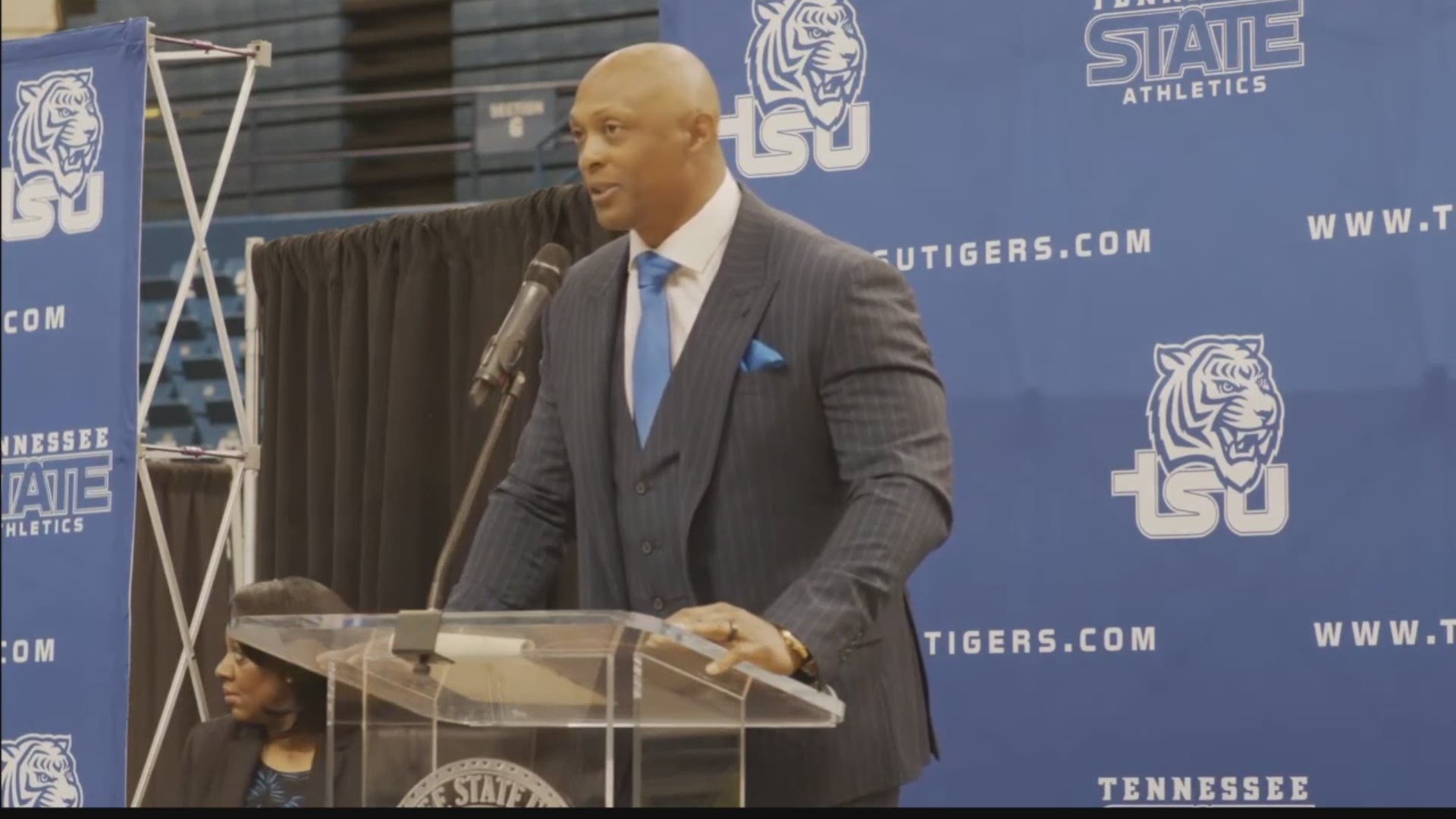 NASHVILLE, Tenn — Tennessee State is banking on Eddie George's name, connections and football knowledge as a former NFL running back to return the proud program with 13 Black national championships to national prominence.

TSU, a historically Black college or university, introduced George at a news conference Tuesday inside the Gentry Center with the Aristocrat of Bands on hand. Athletic director Mikki Allen said his priority when hired a year ago was to renew the standard of excellence. He believes he found his man in George, a proven winner on and off the field.

“He’s dynamic. He's charismatic. He's energetic and magnetic and has all the tools necessary to build a championship level program here at the Tennessee State University,” Allen said.

Tennessee State is taking a risk. George, a four-time Pro Bowl running back with the Tennessee Titans and the 1995 Heisman Trophy winner with Ohio State, has not coached before. He played nine seasons in the NFL and ran for 10,441 yards.

George said this is a new chapter for him. “The No. 1 goal is to win and bring prominence back to this university where it belongs,” he said.

George said he truly understands the history of Tennessee State football. The campus hosted the then-Tennessee Oilers' first training camps in 1997 and 1998 after the franchise relocated from Houston.

He ticked off the names of TSU coaches past from Henry Kean and John A. Merritt to Joe Gilliam Sr. and players like Pro Football Hall of Famers Richard Dent and Claude Humphrey. George noted that TSU is the No. 1 HBCU for producing NFL players.

“Very aware, extremely aware of the rich history here, and I get it,” George said. “So taking this job on carries a lot. I have some big shoes to fill. But I feel like I’m the man to get the job done.”

At first, George told TSU no. His wife, actor and singer-songwriter Taj George, encouraged him to take the job. George said he consulted with his former Titans coach Jeff Fisher, Pittsburgh coach Mike Tomlin, current Tennessee coach Mike Vrabel and Cincinnati coach Luke Fickell about what a head coach does.

He called this opportunity a huge responsibility he doesn't take lightly.

“I have to to be honest,” George said. “When I had some excitement about it, ‘Man, it’d be pretty cool to be a head coach.' I’ve seen what Deion (Sanders) has down at Jackson State, the energy he's created.”

George's businesses include a wealth management company he had been focused on in recent months along with playing golf. Also an actor, George has appeared on Broadway and TV. He said all that prepared him for this moment.

The Tigers went 58-61 over the past 11 seasons, with only one FCS playoff appearance in 2013. Tennessee State announced Monday that coach Rod Reed's contract was not being renewed. The Tigers have had three consecutive losing seasons, including 2-5 this spring.

George didn't mention his initial coaching staff, which reportedly will include Fisher's son, Brandon, who was a defensive assistant at Auburn this past season and defensive coordinator at Southern Utah in 2019.

Allen, who won a national championship playing for Tennessee in 1998, said he knew he had to sell George on this opportunity with everything he has going. But Allen said he told TSU President Glenda Glover that George would have a transformational impact.

Reed told reporters after his final game that the program had been dealing with budget cuts, with no players in summer school the past five years and no real recruiting budget either.

Please join me in congratulating Element Sports Group client, Eddie George, on being named the Head Football Coach at Tennessee State University. The Heisman Trophy winner, Pro Bowler and All-Pro will be an extraordinary leader to the young men at Tennessee State. #HBCU #TSU pic.twitter.com/Smz5JppYUy

Allen said TSU will be announcing fundraising later Tuesday to pay for improvements to athletics and help pay for the coaching staff George is assembling. George said they've talked about the resources needed to take TSU to the top of the Ohio Valley Conference and then compete nationally in the Football Championship Subdivision.

“We're chasing North Dakota State,” Allen said. “We want to win national titles. We don't just want to win conference titles, so there's a commitment financially that goes into that.”