UNA took a 14-3 lead into intermission, but a second half rally by Nicholls State carried the Colonels to a 31-14 win over the Lions at Guidry Stadium. 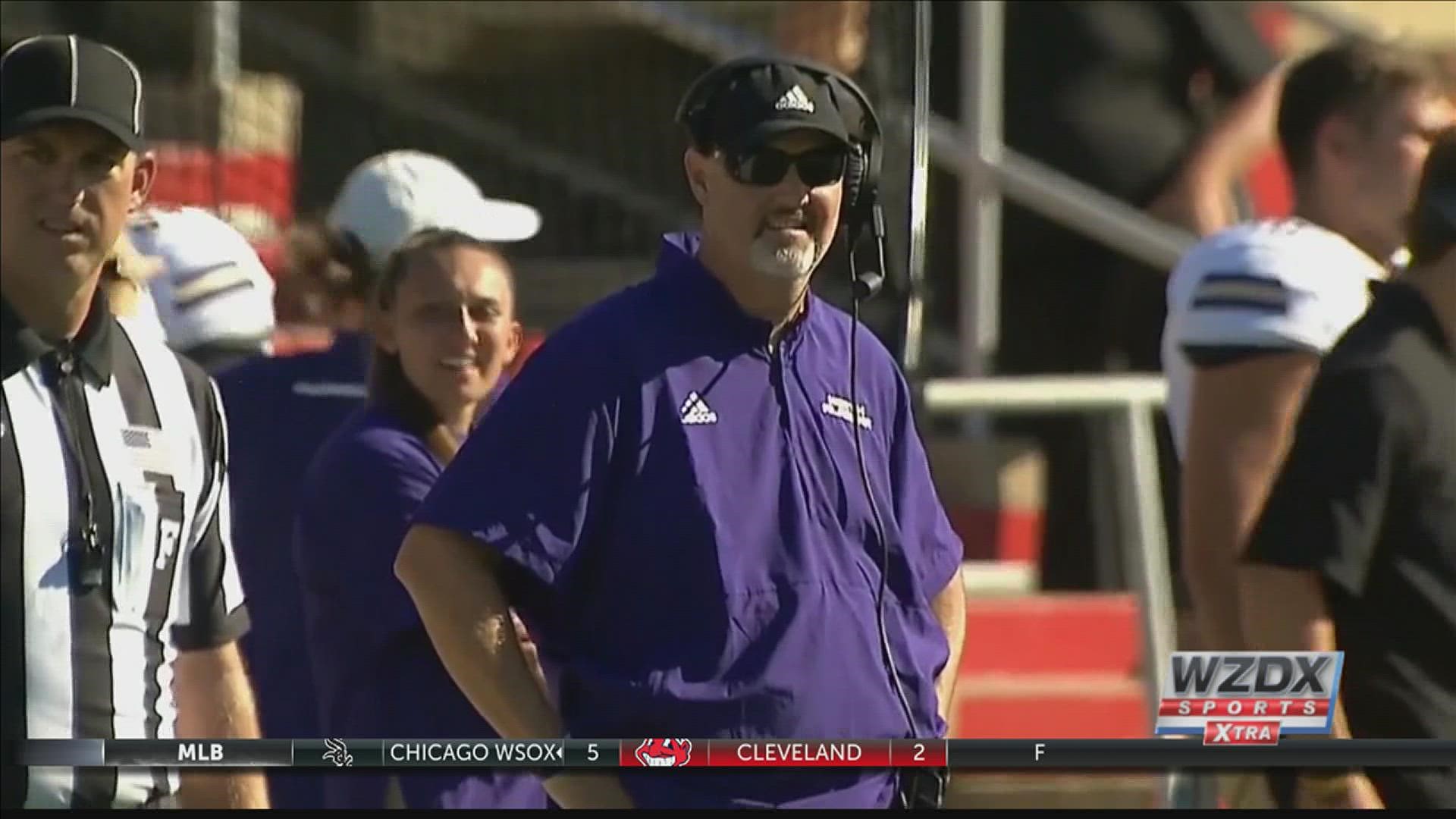 THIBODAUX, La. — North Alabama took a 14-3 lead into intermission, but a second half rally by Nicholls State carried the Colonels to a 31-14 win over the Lions at Guidry Stadium.

Nicholls never led until just over three minutes remained in the third quarter, but the Colonels were able to add a defensive score to secure the lead in the fourth quarter.

With the loss, UNA is now 0-4 overall, while Nicholls improved to 1-2.

Blake Dever ended the game 12-of-19 passing for 158 yards and two touchdowns.


Nicholls drove into UNA territory on its opening possession but the drive ended when a Lindsey Scott pass was picked off by Alonzo Craighton. Craighton had transferred to UNA from Nicholls prior to the 2020 season.

The interception set up UNA at its own 24-yard line and the Lions would score eight plays later.

North Alabama had four plays on the drive or more than 10 yards, including a 17-yard run by ShunDerrick Powell that moved the ball to the Nicholls'five-yard line. On a third-and-goal call, Blake Dever hit Parker Driggers with a five-yard TD pass with 8:12 left in the opening quarter. Grayson Easterling's PAT gave UNA a 7-0 lead.

Nicholls moved into UNA territory again on its second possession, but the Lions' defense stopped the Colonels' possession at the eight-yard line. A 26-yard field goal attempt by Gavin Lasseigne was wide left and UNA continued to lead with 3:55 left in the quarter.

On the Colonels' next possession, Nicholls moved to the UNA 28-yard line but was held on a fourth-and-three attempt, giving possession back to the Lions.

North Alabama then drove 72 yards for a touchdown to take a two touchdown lead.

After moving to the Nicholls 25-yard line, Dever hit Corson Swan with a 25-yard TD pass with 5:02 left in the first half. Easterling's PAT pushed UNA's advantage to 14-0. The drive covered 72 yards in nine plays at took 4:50 off the clock.

Nicholls finally got on the board just before the half as Lasseigne connected on a 26-yard field goal with just 45 seconds left in the second period. The Colonels hoped for more after driving to the UNA one-yard line but a sack by Terrell Townsend moved the ball back to the nine and Scott threw an incompletion on third down.

The Colonels found the end zone on their first drive of the second half, moving 76 yards on nine plays with the touchdown coming on a 19-yard pass from Lindsey Scott, Jr. to K.J. Franklin. The PAT made it 14-10 with 9:52 left in the third quarter.

Nicholls took the lead on its next possession, covering 51 yards in five plays as Scott scored on a 10-yard run with 3:02 left in the third quarter. The PAT put Nicholls on top 17-14.

The Lions had a promising drive midway through the fourth quarter but Dever was sacked and fumbled, with Kevin Johnson returning it 54 yards for a touchdown. It marked the fourth straight game this season that the Lions have allowed a defensive score. The PAT gave Nicholls a 24-14 lead with 8:37 left in the game.

UNA's last scoring threat ended with a missed 28-yard field goal attempt by Easterling with 5:24 left in the game.

Nicholls added a TD with just 1:38 left in the game on an 11-yard TD pass from Scott to Dai'Jean Dixon.