HUNTSVILLE | The No. 21 University of Alabama in Huntsville men’s basketball team bounced back with a rivalry win on Saturday, beating visiting Montevallo... 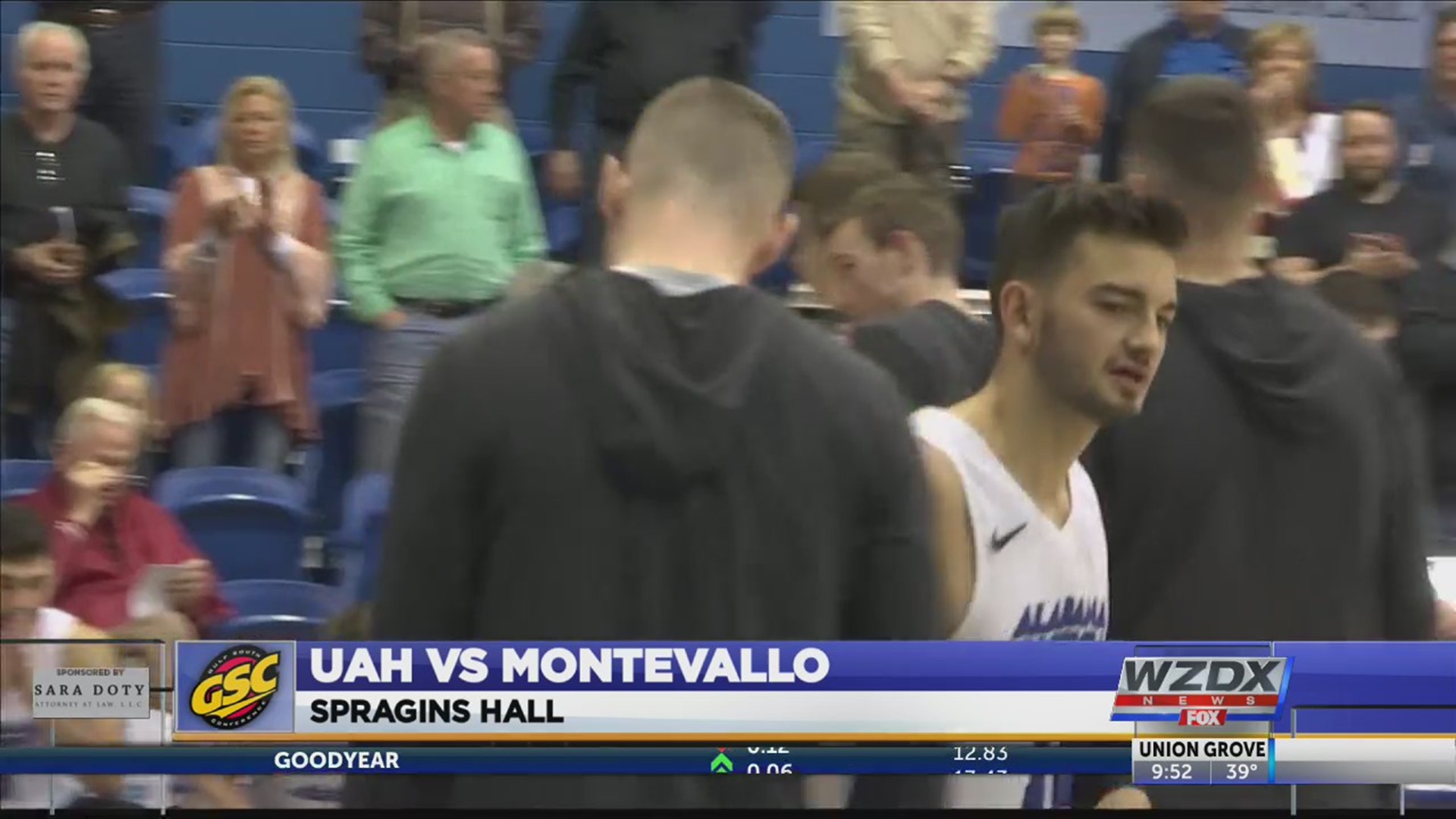 HUNTSVILLE | The No. 21 University of Alabama in Huntsville men’s basketball team bounced back with a rivalry win on Saturday, beating visiting Montevallo 82-72 at Kelly Court at Spragins Hall. The Chargers improve to 18-5 (10-5 Gulf South Conference), while Montevallo slips to 11-12 (6-6 GSC).

Turning Point
-UAH set the tone for the contest in the early minutes of the first half, hitting five 3-pointers as part of a 19-7 run that turned a one-point early deficit into a 24-11 lead that the Chargers would not relinquish the rest of the way.

Inside the Box Score
-The Chargers were led by Max Shulman who went 9-for-16 overall and 8-of-15 from 3-point land on his way to scoring 26 while also adding three rebounds and two steals.
–Sam Orf added 15 on four made 3s and led the team with three steals.
-Completing UAH’s double-figure scorers, Seth Swalve hit three 3-pointers to score 14 while also leading the Chargers with seven rebounds and six assists.
-Montevallo was led by Jonas Parker who scored 30.
-UAH shot 44.8 percent on the night including making 17 3-pointers, while the Falcons connected on 54.7 percent of their attempts.
-The Chargers outrebounded Montevallo by a 34-31 margin.
-UAH forced the guests into 16 turnovers to enjoy a 21-6 edge in points off giveaways.

Inside the Flow
-The two teams traded the lead in the opening two minutes, but a 19-7 run for the Chargers punctuated by one of Shulman’s 3-pointers pushed the hosts ahead 24-11 at the 11:50 mark of the opening half.
-The Chargers would lead by as many as 17 in the period before carrying a 48-34 lead into the locker room at the break.
-UAH maintained its double-digit lead through the vast majority of the second half with the Falcons only briefly pulling to within eight at 76-68 with 2:19 remaining, but the final triples of the night for Shulman and Orf helped the Chargers stymie the comeback effort.

Noteworthy
-The 26 points and eight treys for Shulman represent career-bests for the redshirt sophomore, and those marks are also the most by a Charger this season.
-Shulman is now leading the team with 12.1 points per game.
-The seven rebounds are a season-high for Swalve, and he matches his season-best with the six assists.
-The 46 attempted 3-pointers for the Chargers are the most by the team since firing off a program-record 47 against Mississippi College on Feb. 13, 2016.

Next Time Out
-The Chargers will be off until Saturday when the squad ventures to West Georgia. Tip-off in Carrollton is slated for 3 p.m. CT.