HUNTSVILLE | The University of Alabama in Huntsville women’s basketball team continued its winning ways on Saturday, knocking off Montevallo 73-68 at Kell... 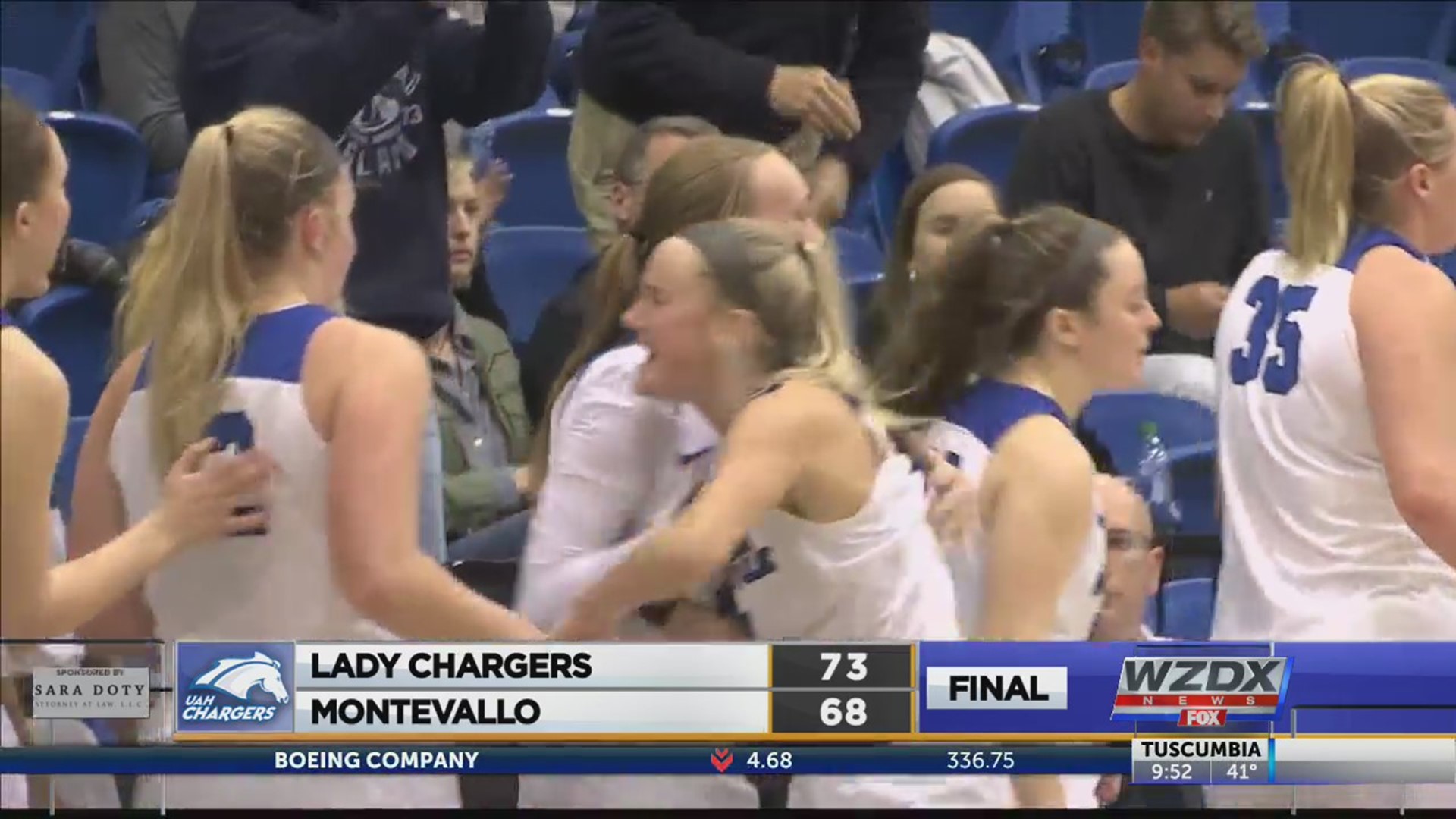 HUNTSVILLE | The University of Alabama in Huntsville women’s basketball team continued its winning ways on Saturday, knocking off Montevallo 73-68 at Kelly Court at Spragins Hall. The Chargers improve to 13-8 (10-5 Gulf South Conference) with their sixth consecutive victory, while Montevallo falls to 16-6 (10-4 GSC).

Turning Point
-With Montevallo surging in the middle of the fourth quarter, the Chargers went on an 8-0 run that pushed the home team into a 65-52 lead with just over four minutes left, giving the squad a lead that would prove to be too significant to overcome.

Inside the Box Score
–Aryn Sanders led the Chargers in the victory offensively as she scored 21 points to go along with a team-high seven rebounds.
-Going 6-for-9 from the floor including a 5-of-8 showing from beyond the arc, Holly Harris poured in 18 points while matching Sanders with seven boards and collecting three steals.
-Rounding out UAH’s double-figure contingent, Selena Pruitt scored 15, logged five rebounds, and also grabbed three steals.
–Emiline Payne handed out a team-high six assists.
-For the contest, the Chargers connected on 49.0 percent of their attempts while holding Montevallo to a 35.8 percent shooting mark.
-Rebounds in the contest were even at 38 for both teams.

Inside the Flow
-The Chargers stampeded out of the gates with back-to-back triples from Harris making it a 12-2 advantage for UAH at the 6:47 mark of the opening quarter, and though the Falcons would eventually knot the game at 19-19 with a strong push, Pruitt’s layup in the final minute of the period made it a 22-19 lead for UAH going into the second.
-The home team would push the lead all the way back out to nine at 35-26 with 2:03 left in the second, and the Chargers went into the locker room up 36-31.
-Pruitt opened the third quarter with consecutive 3-pointers of her own to give the Chargers a 11-point margin, and UAH would lead by as many as 12 in the third on its way to carrying a 52-44 lead into the final stanza.
-UAH scored the first five points of the fourth to build up its largest lead of the night at 57-44, but an 8-0 run for Montevallo cut the deficit to 57-52 with 6:55 left in the game.
-After the Chargers would regain that 13-point advantage, the Falcons would twice pull within four including with 24 seconds left, but the guests could not narrow the margin any closer as UAH secured the 73-58 victory.

Noteworthy
-This is the sixth time this season that Sanders has scored at least 20 points, and she is now averaging 15.6 points per contest.
-The five 3-pointers for Harris match her season high as she also had five against Auburn Montgomery on Nov. 25.
-The Chargers held Montevallo under their season average in points per game (74.0) and field goal percentage (41.0).
-UAH is now alone in fourth place in the GSC standings and is just a half game out of third where the Falcons sit.

Next Time Out
-The Chargers will take on Martin Methodist on Tuesday in the first of two meetings this week. Tip-off at Kelly Court at Spragins Hall is slated for 5:30 p.m.