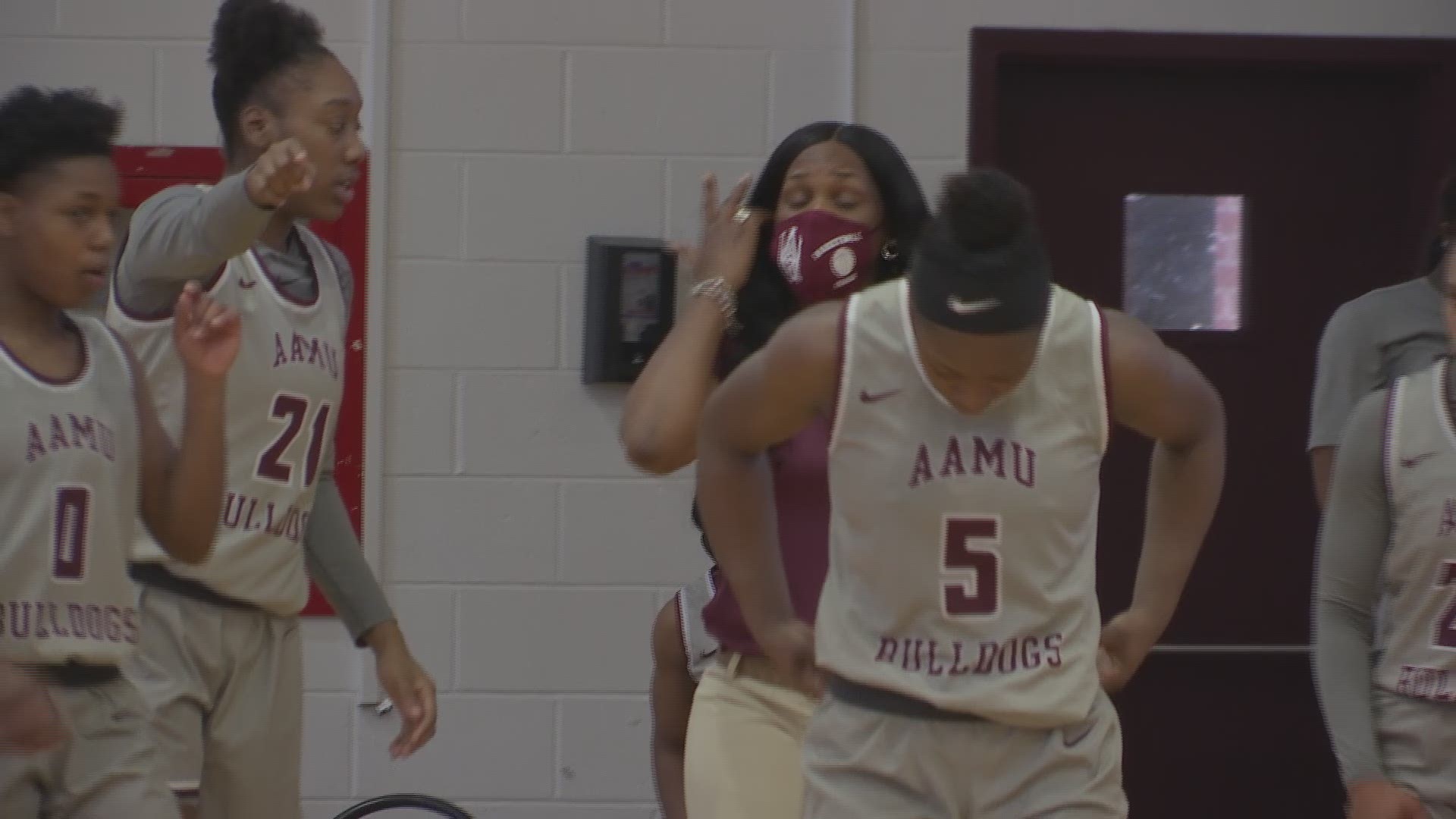 HUNTSVILLE, Ala. — (Alabama A&M Athletics) Facing the defending league champions, Alabama A&M (2-2, 0-1 SWAC) rallied in the second half on multiple occasions but could not overcome a depleted roster and an impressive outing from the Southwestern Athletic Conference's Defensive Player of the Year as Jackson State (2-4, 1-0 SWAC) escaped Elmore Gymnasium with a 64-56 victory in an NCAA Division I women's basketball game on Saturday, January 2.

JSU jumped out to the early lead as they scored the first eight points on their way to a 19-6 lead by the 3:12 mark of the opening period. AAMU would bounce back over the final minutes of the frame, however, using a 6-2 burst to cut the deficit to 21-12 entering the second quarter.

Neither team could find their offensive rhythm at the start of the frame, however, as it would be nearly two minutes until a bucket by Jones pulled the Bulldogs within seven points with 8:14 on the clock. That would ignite a 12-3 run by A&M that drew them even at 24-24, on a three by Jones, with just under five minutes showing on the clock.

Having weathered that run, the Tigers would respond with one of their own, closing the half with a 10-2 stretch as Dayzsha Rogan delivered five points to make it 34-26 at the break.

Jackson State would continue to extend that lead at the beginning of third quarter as Ameshya Williams scored the first six points to fuel an 8-0 run that pushed it to 42-26 just three minutes in. Trailing 46-27 at the six minute mark, the Bulldogs rallied to score 10 of the final 12 points of the frame and narrowed the gap to 48-37 heading to the fourth.

That margin would quickly expand back to 17 as the Tigers scored the first six points to make it 54-37 with 1:09 gone by before A&M answered with an 11-4 run, with seven of those points coming from Jones. That offensive outburst cut it to 58-48 with 3:54 remaining on the clock and would eventually narrow to 61-56 as Burgin drilled a three at 1:18 and Jones sank a pair of free throws with 52 seconds left.

From there, however, JSU would convert three of their four free throws down the stretch to quell that run and salt away the 64-56 victory.

Defending SWAC Defensive Player of the Year Williams put forth a dominant performance as she finished with 14 points and 18 rebounds in 36 minutes of work for the Tigers. Rogan just missed a double-double of her own with 16 points and nine boards to go with three steals and a pair of assists and Jariyah Covington chipped in with 13 points. Cherelle Jones closed things out with six points and six caroms.

Having wrapped up a three-game homestand, the Bulldogs now hit the road for a pair of games, beginning at Mississippi Valley State on Saturday, January 9 before heading to Arkansas-Pine Bluff on Monday, January 11. Tip times for those games are 2 p.m. and 4 p.m., respectively.

NOTES
A&M dressed only seven players and played most of the game with six players following a first quarter injury.