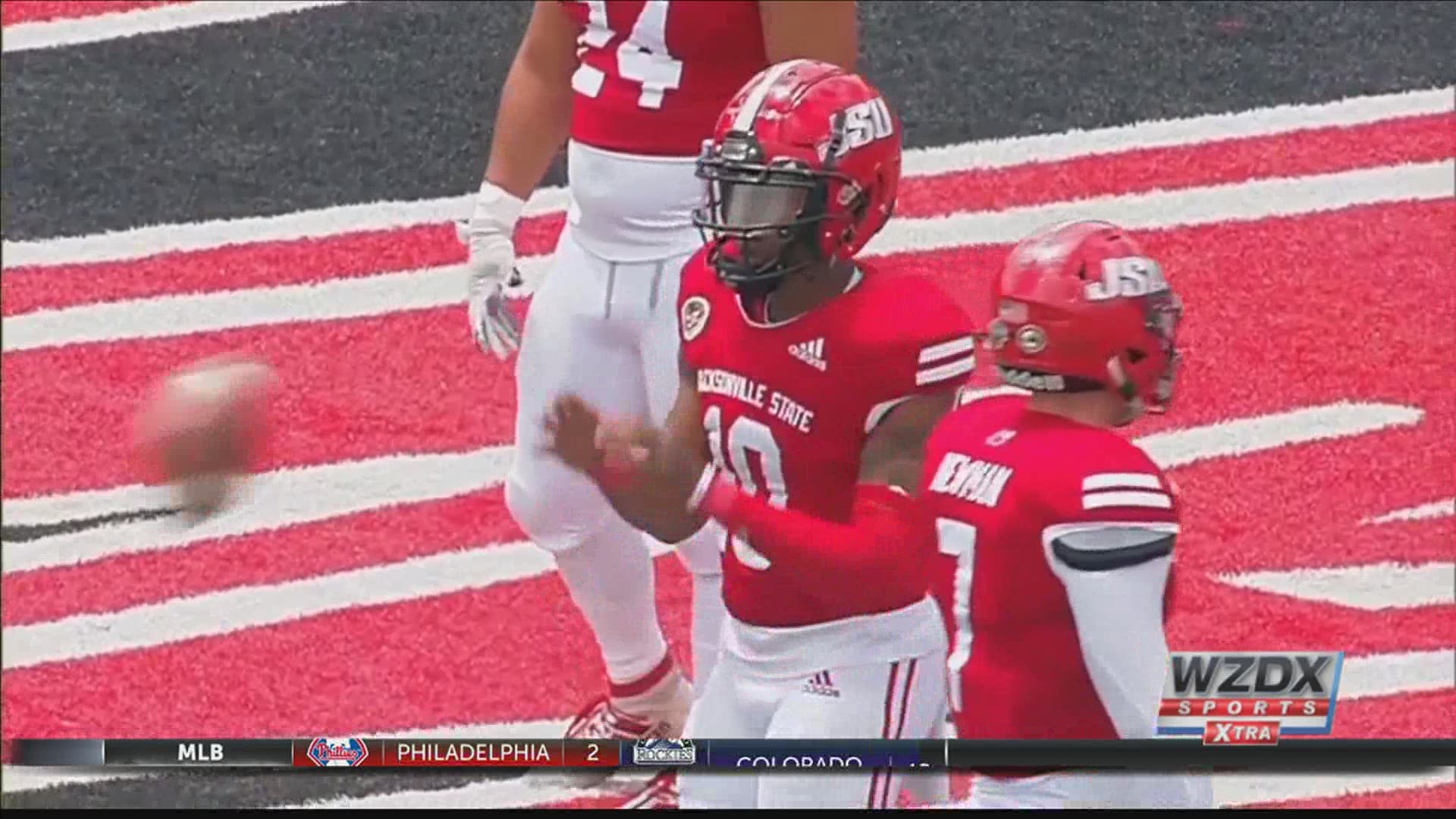 JACKSONVILLE, Alabama — Jacksonville State erupted for three touchdowns in a seven-minute span to conclude the first half en route to a 49-14 win over Pioneer Football League champion Davidson in the first round of the FCS playoffs at Burgess-Snow Field.

The fourth-seeded Gamecocks (10-2) advance to the FCS quarterfinals for the first time since 2015. Davidson, making its first postseason appearance since 1969, finished with a 4-3 record.

The 35-point margin of victory was Jacksonville State's biggest in postseason play since thrashing Sam Houston State 62-10 in the 2015 national semifinals.

"The last few minutes of the second quarter broke the game open," said Jacksonville State head coach John Grass. "The drive to go up two scores was a huge drive, especially after we converted on second-and-35. Then to get the pooch kick and score that easy touchdown was really big for us.

"Any time you survive and advance in the playoffs it's a good day. The atmosphere was a little bit different without the band or cheerleaders, but the limited crowd was great."

Jacksonville State averaged 13 yards per play and accumulated 273 total yards in building a 28-7 lead by halftime. Any momentum the run-oriented Wildcats had established came to an abrupt halt just before intermission when Zion Webb scored on a one-yard quarterback draw to extend the Gamecocks' lead to 21-7 with 40 seconds remaining.

JSU's Demarco Price recovered the ensuing short kickoff at Davidson's 22. Webb immediately connected with receiver Michael Pettway on a 22-yard touchdown strike with 33 seconds left and Alen Karajic tacked on the extra point for a 21-point lead at the break.

The 14 points scored in seven seconds set a Jacksonville State school record and crushed the Wildcats' hopes of staying within striking distance.

"That last five minutes the game just got away from us," said Davidson coach Scott Abell. "We couldn't afford that at the end of the half and made it very difficult for us."

Webb threw touchdown passes of 55 yards to Pat Jackson and 22 yards to Pettway in addition to his second-quarter rushing TD. Josh Samuel and Uriah West each had a touchdown run in the first half.

Samuel's one-yard run gave JSU an early 7-0 lead after Webb had raced a career-long 67 yards on the previous play. West's six-yard run at the 7:03 mark in the second quarter capped off an eight-play, 86-yard drive that was set up by Logan McVay's 34-yard reception deep into Davidson territory.

The Wildcats entered the contest as the FCS leader in rushing offense at 293.8 yards per game. They finished with 202 on the ground, becoming the first JSU opponent in the last 10 games to rush for more than 100 yards.

But Davidson's aerial attack was essentially a non-factor as quarterback Tyler Phelps completed just seven passes for 59 yards. The FCS leader in third-down conversions at 56% was limited to only 6-of-18 by the Gamecock defense.

Davidson kept possession for 42 minutes to Jacksonville State's 18 and ran 79 plays to the Gamecocks' 43. JSU, however, averaged 10.7 yards per play and outgained Davidson 461-261.

The Gamecocks' FCS quarterfinal opponent will be fifth-ranked Delaware on Sunday at 2 p.m. CT