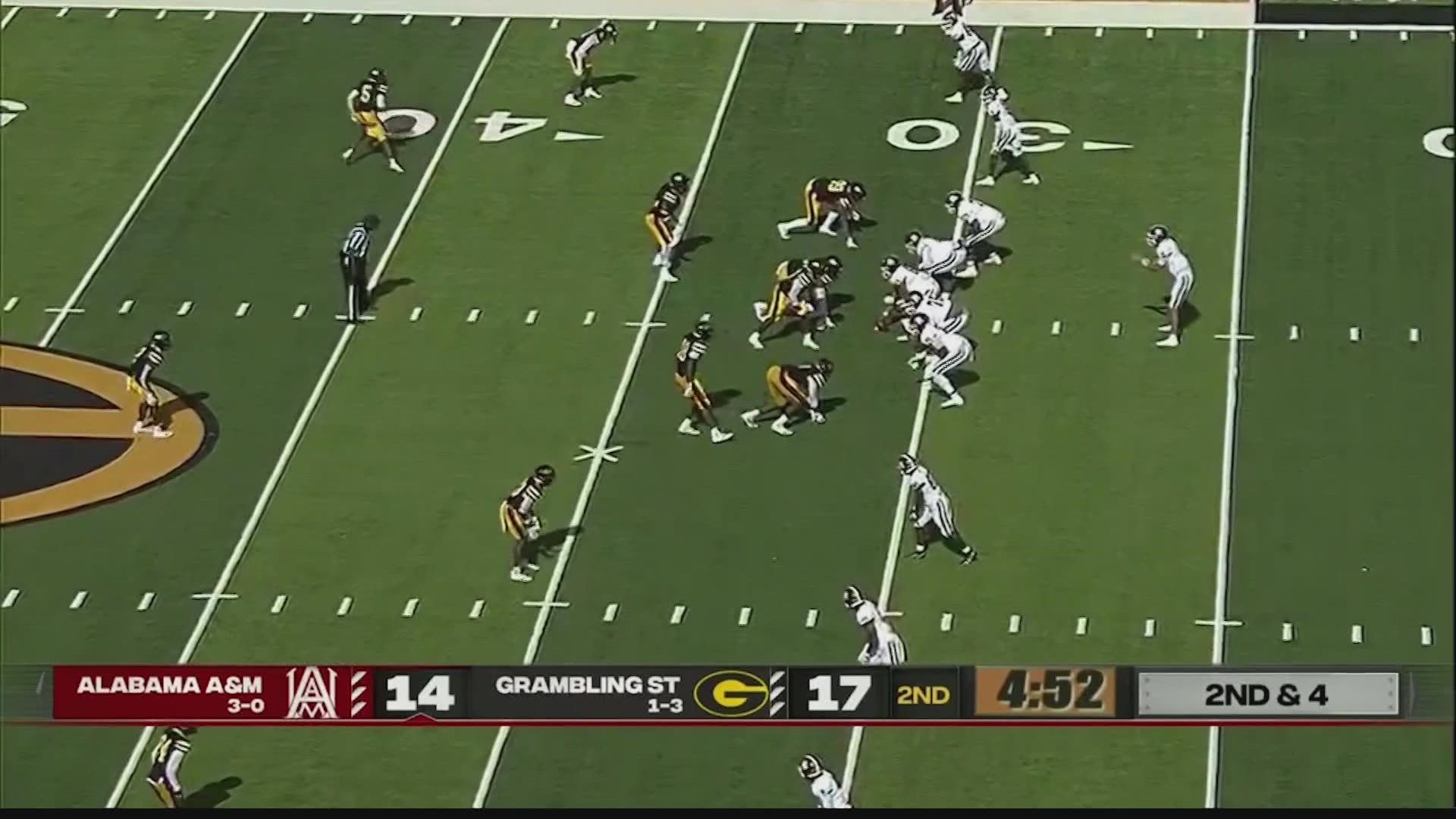 GRAMBLING, La. —  Noah Bodden made his first career start at quarterback and shook off some early jitters as the Grambling State University football team scored 24 unanswered points in an explosive second quarter as the Tigers picked up their first Southwestern Athletic Conference (SWAC) victory with a 37-28 win over Alabama A&M on Saturday afternoon at Eddie G. Robinson Memorial Stadium.

Grambling State (2-3 overall, 1-1 SWAC) fell behind 14-0 early in the second quarter, but capitalized on three Bulldog turnovers and cashed them all into 21 points before taking a 24-14 advantage into the break.

Alabama A&M (3-1, 1-1) took the opening kickoff and marched 87 yards in 10 plays as Aqeel Glass tossed the first of his four touchdowns to Dee Anderson, an 8-yard score, to give the Bulldogs a 7-0 lead with 11:49 remaining in the opening quarter.

The Bulldogs added to the lead early in the second quarter as Anderson caught an 8-yard touchdown strike from Glass, extending the margin to 14-0 with 13:15 left in the first half.

After a Grambling State punt, the Tiger defense went to work as Glass was picked off by Brendan Vaughn and returned it to the AAMU 20.

The Tigers cashed the turnover into seven points as Tony Forrest Jr. caught a 13-yard touchdown pass from Bodden, as GSU cut the deficit to 14-7 with 7:58 remaining.

On the ensuing kickoff, GSU kicker Garrett Urban's kick fell in between the 20 and 30 yardline and was recovered by Rey Estes as the Bulldog 15.

Grambling State turned the good field position into three points as Urban booted a 39-yard field goal with 6:16 left, trimming the margin to 14-10.

The Tiger defense came up big again as Quincy Mitchell picked off Glass and returned the interception to the Bulldog 15.

On the very next play, Bodden found Dorrell James for a 15-yard touchdown strike, giving Grambling State a 17-14 lead with 5:22 remaining.

Grambling State's defense again caused havoc on Alabama A&M's next drive as Glass was sacked by Sundiata Anderson as the ball came loose. Cameron Richardson came up with the ball and rumbled 21 yards for the score as the Tigers extended the advantage to 24-14 with 4:38 left.

Grambling upsets Alabama A&M,37-28! The Bulldogs had 6 turnovers and the G-Men capitalized on every one of them! @NaomiGreyTV will have highlights from the game on @FOX54News tonight. #SWAC @FCSNationRadio1 @TheYardHBCU @InsideHBCUFball @HBCUSports1 @MyBCSN1 pic.twitter.com/OaHqp7F77q

The Tigers pushed the advantage to 31-14 after Bodden connected with Kobe Ross for a 60-yard touchdown down the right sideline with 3:25 left in the third, which set up a wild fourth quarter.

Urban's 27-yard field goal with 11:37 left gave Grambling State a 34-14 advantage, but that left a lot of time for Glass and the offensive passing attack for the Bulldogs.

Grambling State marched 55 yards on six plays, but Bodden was picked off by Jamal Irby, giving one last hope for the Bulldogs.

However, on the very next play, Glass was intercepted by Richardson and returned to the AAMU 17.

The interception set up Urban's third field goal of the day, a 27-yarder, which sealed the game with 43 seconds left.