After falling behind 16-0, Fyffe scored 21 unanswered points to win their 45th game in a row and 3rd straight state championship. 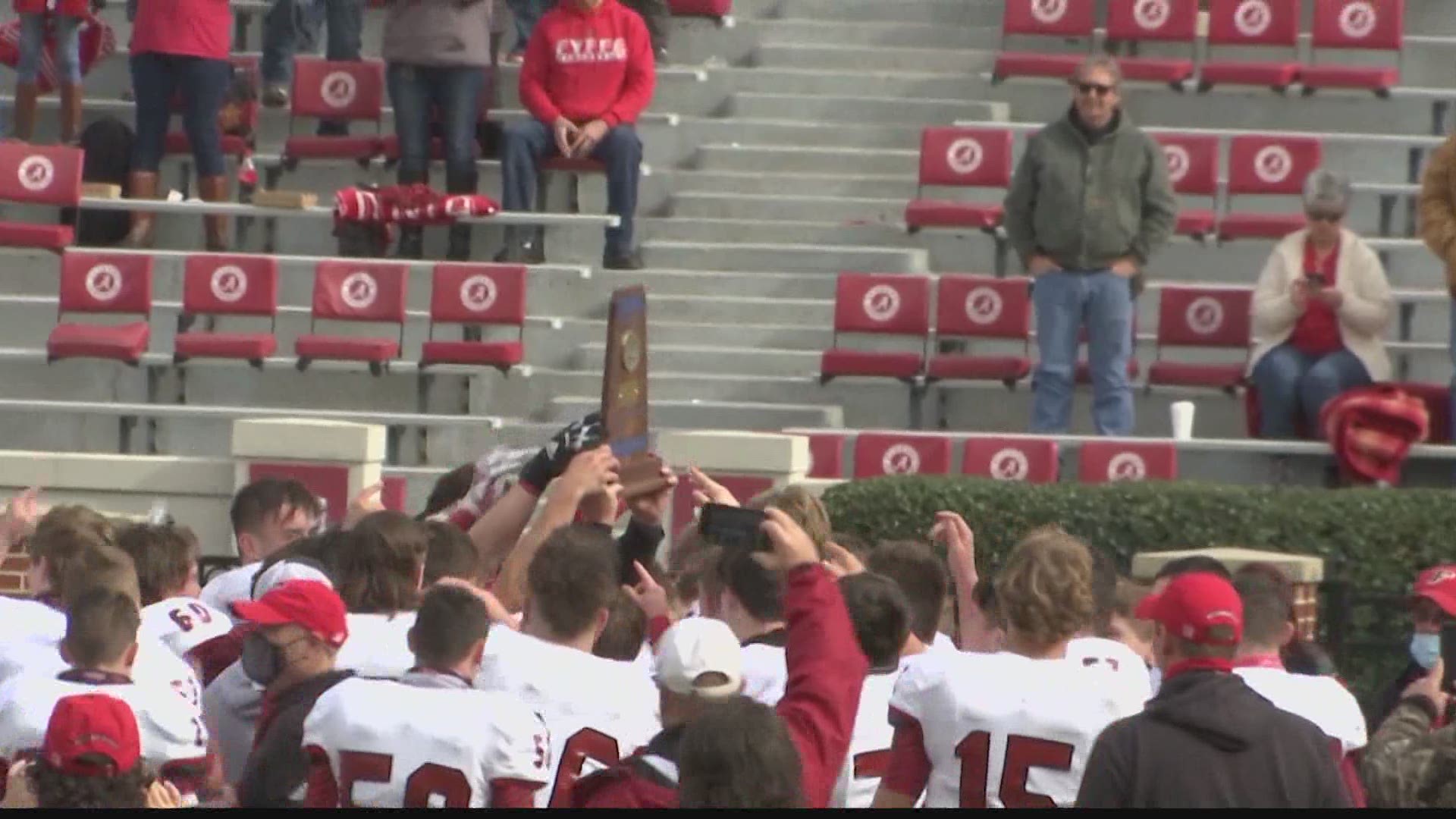 Fyffe, coached by Paul Benefield, had a goal-line stand of its own – forcing the Knights (12-3) to punt from their own end zone which resulted in a safety to close the gap to 16-15 and the Red Devils took the free kick and drove 67 yards in just four plays to score the winning TD with just 1:03 to play to win 21-16.

After falling behind 16-0 in the opening quarter and having a blocked field goal return for a touchdown wiped off the board after an instant-replay review, Fyffe rallied to capture its third straight state championship, but first in Class 3A, at Bryant-Denny Stadium.

Fyffe’s Ike Rowell scored the game-winner on a 1-yard run with 1:03 remaining – his third touchdown en route to being winning the game’s MVP award – to cap a 67-yard drive that lasted just four plays. Catholic got one last chance but the Knights’ pass into the end zone on the final play fell incomplete. “I knew these guys have no quit in them,” Benefield said. “It’s a special group of kids.”

Fyffe extended its winning streak to 45 straight games, and the Red Devils have now won five state championships in the last seven seasons. The Red Devils haven’t lost since falling to Sulligent in the 2A quarterfinals in November 2017.

Fyffe won 2A titles in 2014, 2016, 2018 and 2019 before moving up to 3A this season. Benefield, who was honored earlier this season with the Fyffe football stadium being named in his honor, earned his 300th career coaching victory earlier this season and capped it with another state title.
“This is the sweetest one of all,” Benefield said. “It’s unbelievable. I don’t know what to say or how to put it. We’re not a come-from-behind type of team. … It’s amazing. It’s an amazing group of kids to go out 45-and-0.”

Catholic (12-3), coached by Aubrey Blackwell, sprinted to a 16-0 lead in the first quarter with Judd Osten kicking a 26-yard field goal after D.J. Carter’s 65-yard kickoff return to start the game.
Quarterback Caleb McCeary hooked up with Myles Butler for two touchdown passes – a 13-yarder to cap a 10-play, 76-yard drive and then a 56-yarder on a screen pass on the first play of the next drive for a 16-0 lead with 41 seconds to go in the first quarter. The Knights missed the first extra point and made the second.

Credit: AHSAA
Fyffe's standout Ike Rowell accounted for 295 of Fyffe’s 316 yards of total offense. He was named the MVP of the Class 3A Championship game.

Rowell, who rushed for 140 yards on 36 carries and completed 5-or-7 passes for 155 yards,  got the Red Devils on the board with a 4-yard run with 2:33 to go in the first half to make it 16-6 after a blocked extra point. He appeared to cut into Catholic’s lead on the final play of the first half when he blocked a field goal and returned it 75 yards for an apparent touchdown. The play was overturned by instant replay following a challenge by Catholic’s Blackwell concerning expiration of the play clock expired. Upon review, the TD was nullified resulting in a delay of game penalty. Catholic then lined up for a final untimed play, but McCeary’s pass fell incomplete and the Knights carried a 16-6 lead into halftime.

After the safety, Fyffe took over at its own 33 with 2:59 to go after the ensuing free kick. Rowell completed passes of 34 and 27 yards – both to Brody Dalton – to move the ball inside the Knights’ 5,and the quarterback scored the game-winner with 1:03 to go, making it 21-16. “We don’t know how to give up,” Dalton said.

Catholic drove to the Fyffe 34 and called timeout with two seconds to go, but McCeary’s pass on the final play bounced off a teammate in the end zone and fell incomplete. Rowell accounted for 295 of Fyffe’s 316 yards of total offense. He also returned five kickoffs of 104 yards. Dalton caught three passes for 76 yards.  Justin Stiefel added two catches for 79 yards and also intercepted a pass and had four tackles on defense. Hunter Gillilan led the Fyffe defense with seven tackles.