Jaylen Waddle is headed to the Miami Dolphins to provide a dynamic target for his former Alabama teammate, Tua Tagovailoa. 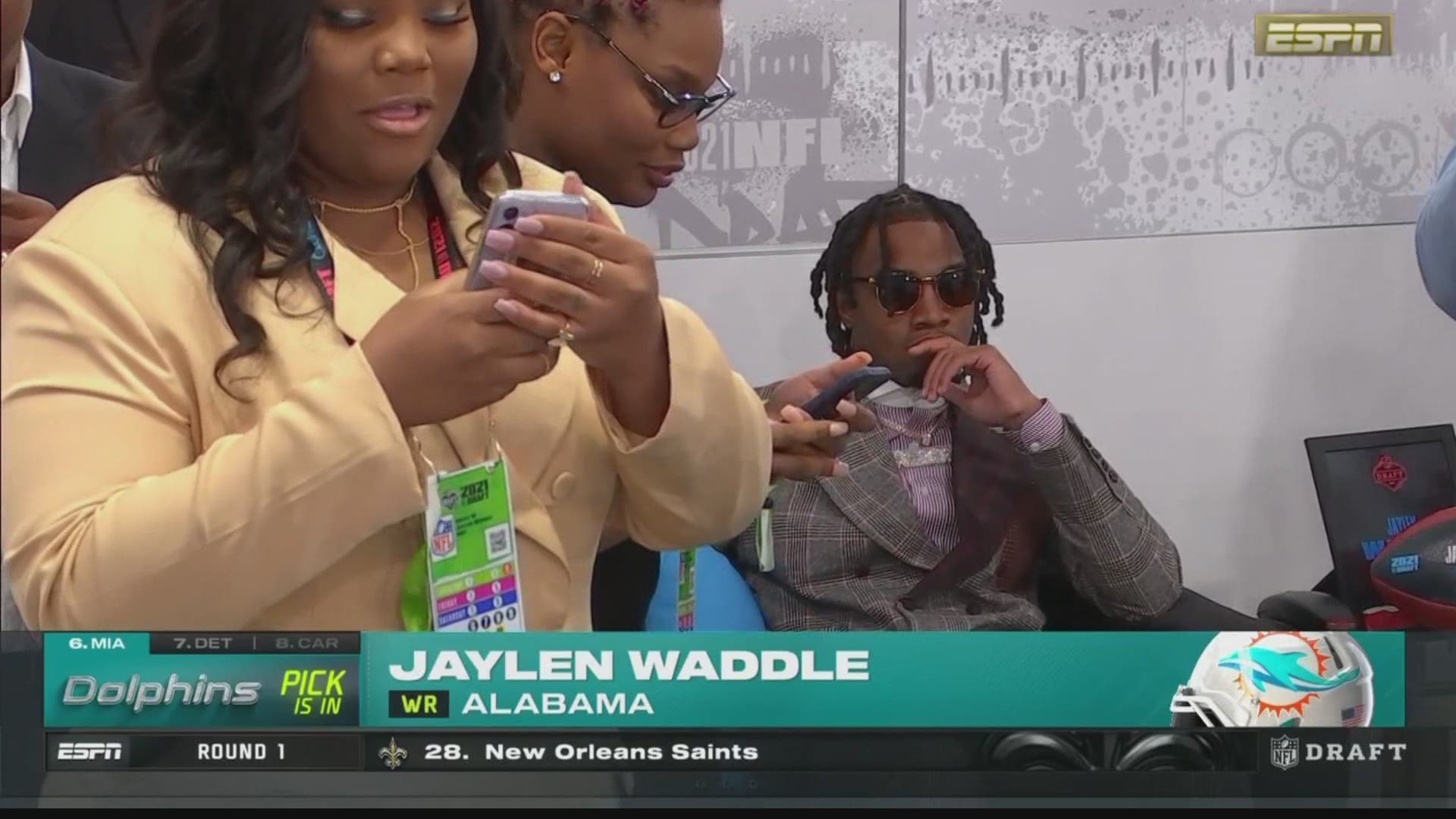 MIAMI — It's a Crimson Tide reunion as the Miami Dolphins selected speedy receiver Jaylen Waddle with the No. 6 overall pick in the 2021 NFL draft, giving quarterback Tua Tagovailoa a much-needed playmaker.

With top offensive weapons Kyle Pitts and Ja'Marr Chase going off the board in the top-five, the Dolphins were left to choose between Waddle and Alabama teammate DeVonta Smith, the Heisman Trophy winner.

They chose Waddle, who was the fastest receiver in college last year per GPS data that teams collected. He didn't run the 40-yard dash due to a fractured ankle suffered in October, but it's believed he would have threatened John Ross' 4.22 record.

When the pick was made, Tagovailoa excitedly jumped on Instagram Live when the Dolphins selected Waddle saying "J-Dub, yessir, let's go."

"Chemisty is there for sure," Waddle said of Tagovailoa. "I'm coming to work. I'm sure he is too."

The Dolphins desperately needed to add more speed and playmaking ability to one of the NFL's slowest offenses. Waddle and free-agent signing Will Fuller will help the Dolphins fully support and evaluate Tagovailoa headed into Year 2.

"It's just great to be a Dolphin. We are going to do our best to make plays," Waddle said about reuniting with Tagovailoa. "I'm trying to be a part of something special."

What makes Waddle stand out is his elite run-after-catch ability and status as the best returner to come out of the draft in years. He's drawn pre-draft comparisons to Kansas City Chiefs star receiver Tyreek Hill.

"I get a lot of comparisons to Tyreek because of his size and what I can do as a runner. But I want to be my own player. I'm going to be the player that I always have," Waddle said.

Teammate Najee Harris alluded to that comparison on The Adam Schefter Podcast last month saying: "He's small but he's dynamic. He's explosive. Really really explosive. Closest thing to Tyreek Hill. You gotta see him in person, how he plays how he gets in and out of cuts, how he stops and goes 60 right away."

Jaylen Waddle to the @MiamiDolphins. Reunited with Tua 🔥

Waddle, 5-foot-9½ and 180 pounds, is the third Tide player to be drafted by the Dolphins over the last two drafts and fifth to be selected in the top three rounds over the last six drafts.

Waddle says he's fully recovered from his fractured ankle injury and expects to be full go when he hits the field.

Waddle averaged 9.8 yards after the catch, highest among power-5 receivers with at least 100 catches since 2014.