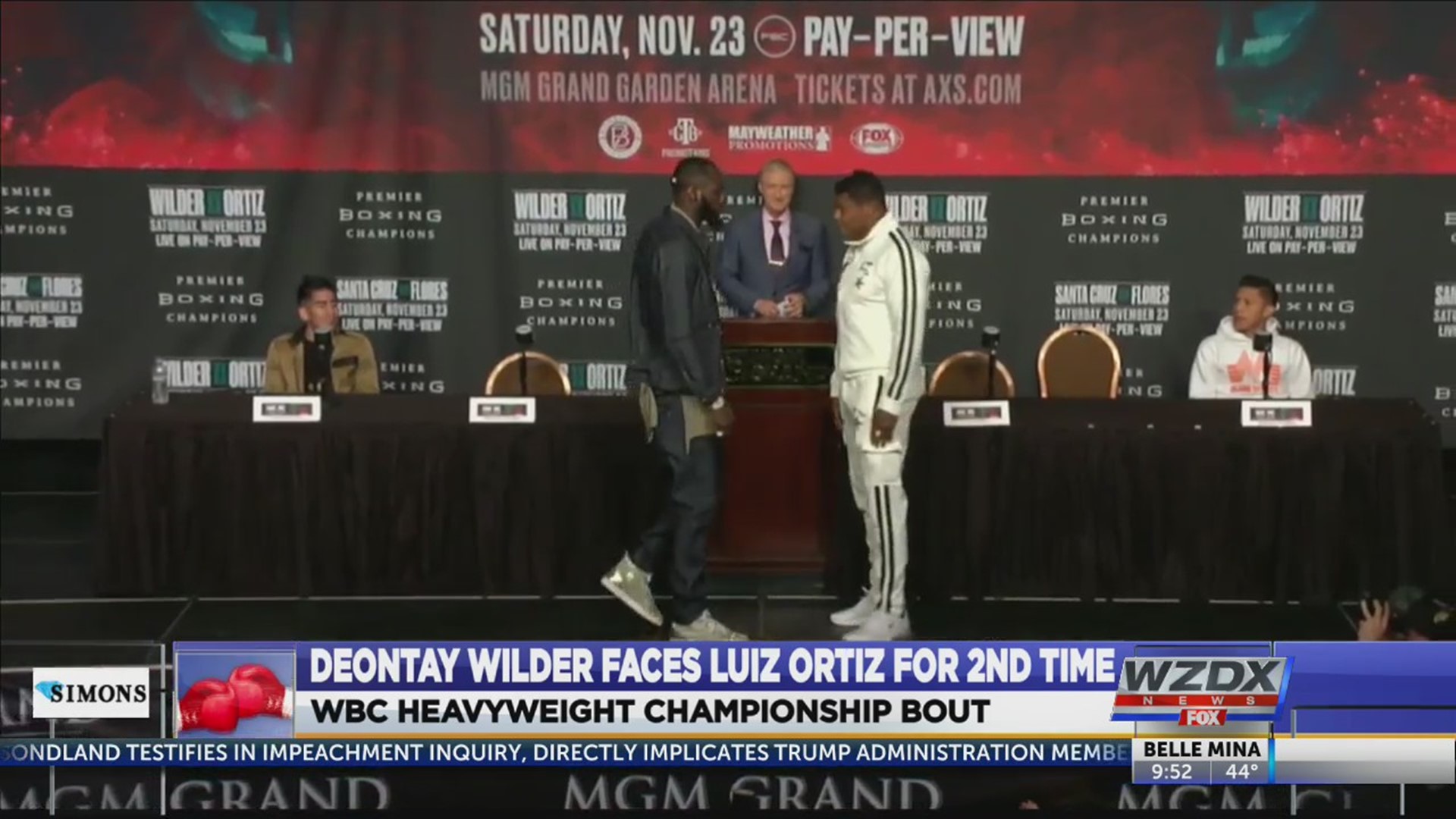 Tickets for the event, which is promoted by BombZquad Promotions, TGB Promotions and Mayweather Promotions, are on sale now and can be purchased at www.mgmgrand.com or www.axs.com.

Here is what the fighters had to say Thursday from inside the MGM Grand Garden Arena in Las Vegas:

“I’m the best in the world and I say it with confidence. With that being said, I have to give the fans what they’re hungry for. That’s exciting fights. The heavyweight division was in a dark place, but now it’s on fire and I must keep it going. (Video HERE)

“Luis Ortiz is one of the best in the world and one of the most dangerous men in boxing. No one in the top 10 has given him an opportunity. They say he’s old, but if that’s the truth, then one of them should get in there with him.

“When I look at the landscape of the heavyweight division, this man still wasn’t getting an opportunity. It was an amazing fight the first time and I’m going to make adjustments this time. That’s what it’s all about. I will be at my best Saturday night.

“I’d rather go through difficulty in the ring than go through my whole career being perfect. What kind of legacy would I have? I want to give you something to remember me by.

“Luis Ortiz looks good, but I don’t think it’s going to matter against a fighter like me. I’m in shape 365 days a year. I come to camp in shape. The first day of camp, we were sparring. It’s always good to see my opponents in shape and prepared properly for a war. That’s all I can ask. Because they know what they’re in for when they go against me. (Video HERE)

“This is a great card with great champions and fighters up here. What more could you ask for? Nothing more needs to be said. Now it’s time for action. I’m looking forward to giving everyone the best of me.

“We train very hard to be prepared and go to war. You already know what to expect. The hard part is the waiting. This is what it’s all about. I can’t wait for Saturday night. My opponent has to be perfect for 12 rounds, and I only have to be perfect for one second.”

“I don’t like to lose. There were legitimate circumstances why I wasn’t at my best the first fight. It was a fatigue stoppage. I believe if I had continued, I would have gotten the knockout. It was only fatigue, but I’ve corrected that this time around, so the better man will win.”

“This will be the second world war between us. I’ve had 500 fights including my amateur fights. At heavyweight, everyone has power. Sometimes it feels like a horse is kicking you. Wilder has a lot of strength, but I’m going to show what I know and what I can do.

“Like I said before, and Deontay said too, this is not going 12 rounds. One of us is getting knocked out. I wish there were no bells between rounds so we could just keep going. (Video HERE)

“This isn’t just Deontay fighting any other opponent. Obviously Deontay had his reasons for taking this fight. But on Saturday, I’m going to show why that was a mistake. I’m going to be the new heavyweight champion of the world.

“This is the holy grail, to be taking on the true heavyweight champion of the world. I want to be considered one of the greatest fighters ever from Cuba. I am very thankful to the trainers who I had as a child who taught me the sport.

“I definitely want to thank Deontay, and my whole team, for getting me this opportunity for a rematch. This is what life is all about. This is not going to be my last opportunity. I’m here to fight and that’s what you’ll see on Saturday night.”

“I think I’ll still throw a lot of punches at the new weight. I always train the same no matter what. My dad says that I need to be working for the whole three minutes of each round. (Video HERE)

“The only thing that is different for this fight is that we’re working on our power. We’re working on sitting down on our punches because we know the fighters in this division are bigger and stronger.

“My strength and conditioning coach has been having me do more weights than usual and I’m sparring with bigger guys than usual. The ones I’ve sparred before say that I’m hitting even hard than in the past.

“To all the fans, I’m really happy and excited to put on another great show for you. Miguel and I are going to give a great show for the fans and try to steal the show. It will be hard with this main event, but we’re going to try our best to make it the fight of the night.

“Once the fans see how great the fight is, they’re going to see how amazing a fighter Miguel Flores is. We know what he’s capable of and that’s why I trained so hard to get this win.

“To become a four-division world champion would be a huge accomplishment for me. I never dreamed of winning titles in four divisions. Not many fighters can say that and I’m happy and excited to get in the ring Saturday and make this new dream come true.

“I love fighting for Mexico and I think they’re going to be proud of my performance Saturday night. I fight for them and I hope they keep supporting me as my career goes on.”

“Leo is a great champion but we’ve worked hard. In boxing people see the hands fly, but I’ve got ring knowledge. We’re going to offset what he does and get the victory Saturday night.

“There’s not much left to be said. We’re ready. Leo is a great fighter and I respect his family. But when we step in that ring. I’m trying to be like Wilder and knock him out. Leo and I are definitely going to steal the show with an action packed fight.

“I’m feeling great. We’ve had about a year of camps where Leo was the main focus on the radar. We’re calm, relaxed and ready to let it all go Saturday night. I know it’s going to be a tough fight, but we had a great camp to put on an exciting match.

“There’s going to be a little bit of everything. When you have two Mexican fighters, you just can’t help it. When you take a shot, you want to get it back. But I also know we have to remain smart and calm.

“I know his dad tells him to try to box so we know we have to be ready for that too. If he wants to box we’re ready for a technical fight. But if he wants to brawl, I’m ready to start hooking.

“Everything is going to work for me in there. You want to work and not get hit, but I know that I can take it and give it. On Saturday night, we’re going to give it.

“We have worked a lot on trying to slow down the pace of fighters who throw a lot of punches. I’ve been a volume puncher all my life as well. We’re both warriors and people are underestimating me. I love it because I’m going to give them a surprise Saturday night.”