A season that started 211 days earlier in the Florida Panhandle came to a halt on a warm, overcast Alabama spring afternoon as Delaware knocked off Jacksonville St. 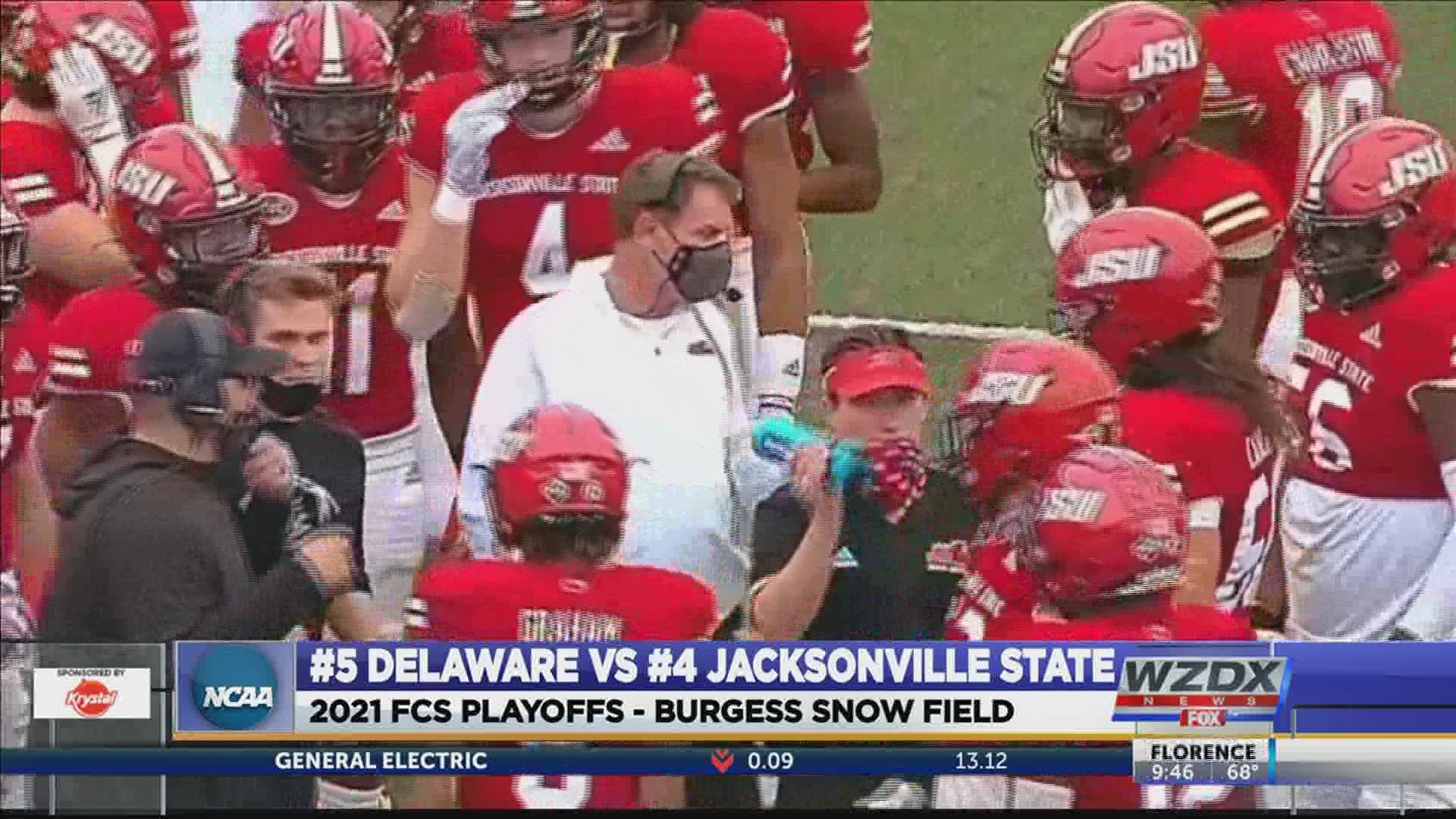 JACKSONVILLE, Alabama — A season that started 211 days earlier in the Florida Panhandle came to a halt on a warm, overcast Alabama spring afternoon as fifth-seeded Delaware knocked off Jacksonville State 20-14 at Burgess-Snow Field in the FCS quarterfinals.

The Fightin' Blue Hens (7-0) won their first road playoff game in 14 years behind a stout defense that limited the Gamecocks to just 200 total yards, 199.4 below their season average. No. 4 Jacksonville State, which was making its first quarterfinal appearance since 2015, finished 10-3.

Delaware limited the Gamecocks to seven first downs and became the first FCS opponent since Kennesaw State in 2017 to hold JSU to 200 yards or less total offense. Jacksonville State was 1-for-12 on third-down conversions.

Jacksonville State lost starting quarterback Webb to a leg injury late in the first quarter and struggled to establish any offensive consistency. Delaware led 14-0 at halftime behind long touchdown drives on its first two possessions.

The Gamecocks were held to 75 total yards in the first half, but equaled that amount on their first two plays after halftime to climb back in it.

Freshman A.C. Graham, the third JSU quarterback to appear, sprinted 74 yards straight up the middle on first down before being tripped up at the Delaware 1. Uriah West ran the last yard for a touchdown and Alen Karajic kicked the extra point to slice the Blue Hens' lead to 14-7 with 14:27 to go in the third quarter.

Delaware jumped out to a two-touchdown lead in the game's first 11½ minutes with scoring drives of 75 and 89 yards.

Anthony Paoletti scored on a two-yard run after the Blue Hens received the opening kickoff and drove to the end zone in eight plays. Ryan Coe's PAT made it 7-0 with less than four minutes elapsed.

The Colonial Athletic Association's automatic qualifier extended their lead on the next series. Nolan Henderson passed 24 yards to Gene Coleman II to JSU's 1 and Dejoun Lee ran in two plays later. Coe's second extra point made it 14-0 at the 3:28 mark in the first.

Coe added field goals of 23 and 47 yards in the second half.

Graham threw a 27-yard touchdown pass to Jared Scott with 41 seconds remaining to pull Jacksonville State to within 20-14. But the six-time national champions recovered Karajic's onside kick attempt and ran out the clock to advance to the FCS semifinals next week.

Trae Barry caught four passes for 52 yards to lead the Gamecocks and now has 1,610 career receiving yards. Graham was the top rusher with 62 yards, though no other JSU runner managed more than 15 as the Blue Hens' defense surrendered only 107 on the ground.