UNA's original 11-game fall schedule was reduced to four contests, with three of those coming against FBS opponents. First up is Liberty. 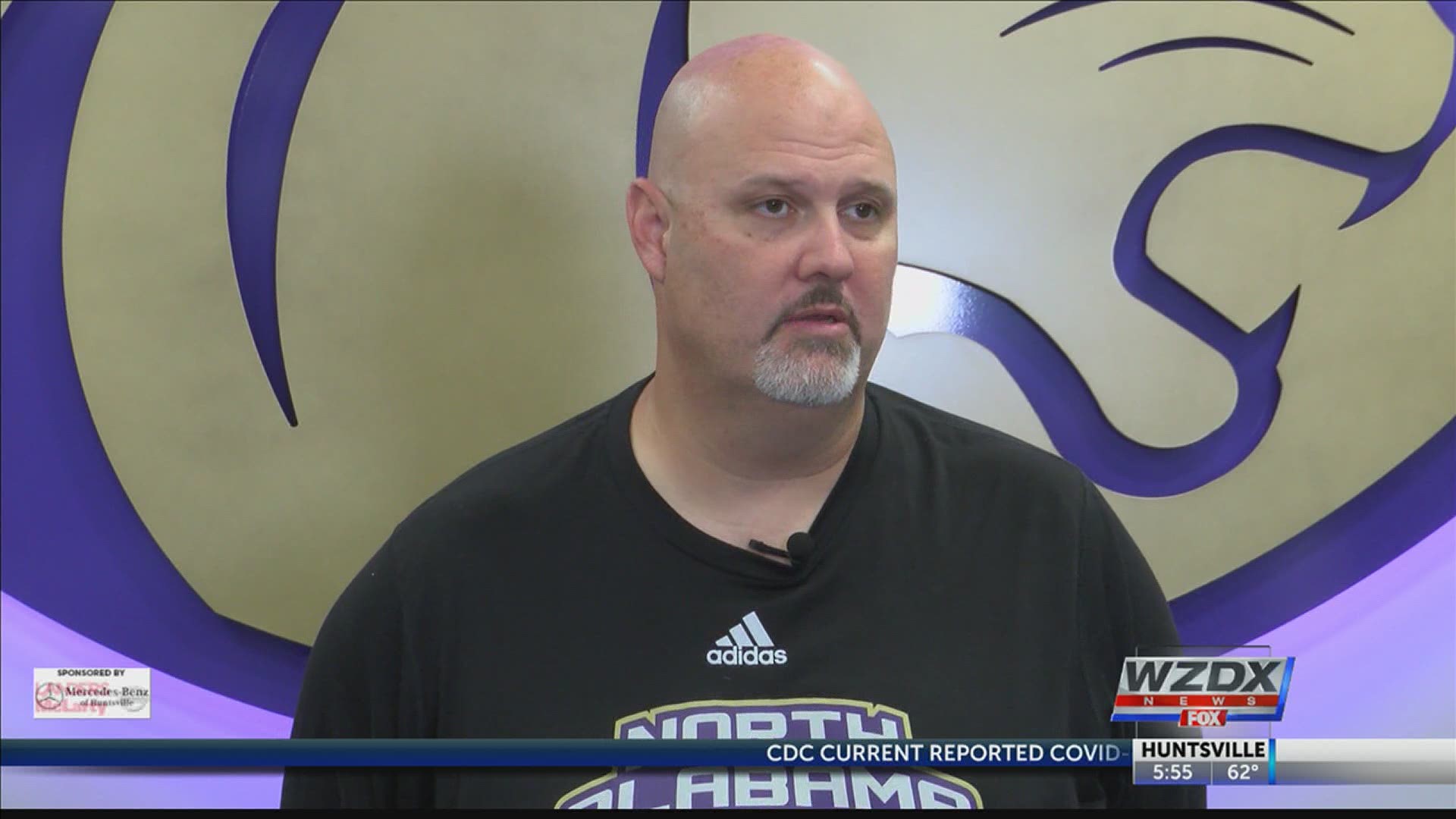 FLORENCE, Ala — The University of North Alabama will open its 72nd football season this Saturday in Lynchubrg, Va., when the Lions take on unbeaten Liberty University at noon Central at Williams Stadium.

The game will be broadcast on ESPN3 and carried on UNA's flagship radio station, WBCF 97.1 FM.

UNA's original 11-game fall schedule was reduced to four contests, with three of those coming against FBS opponents, beginning with Liberty. The game will be the first athletic event by a North Alabama team since March 11, 2020, when the UNA women's basketball team lost a 90-87 overtime thriller to Liberty in the semifinals of the ASUN Conference Tournament at Flowers Hall.

"We are excited to finally be in a game week, but at the same time it's a strange feeling to be preparing for your first game in October," said UNA Head Football Coach Chris Willis. "Usually at this point we have already played four or five games so it is exciting but different."

Willis said the Lions are eager to lineup against someone else and are also excited about the road trip.

"The number one thing for the players is to play against someone other than themselves," Willis said. "The guys are also excited to go on the road and have a chance to hang out together. That's something we haven't even been able to do here, even with our team meetings. So this should be a good bonding experience for us."

Liberty opened its season with a 30-24 road win against Western Kentucky and followed with a 36-34 home win last Saturday over FIU.

"It's a real challenge to not only be playing an FBS team with 85 scholarships, but to also be playing a team that has two games under its belt and is 2-0, when we're lining up for the first time," said Willis. "We are going to do all that we can to compete and try and win this football game. We'll take this game and try and find an identity. We'll have mistakes and some bad plays but we'll learn from them and move forward."

"We are using this four game schedule for the future," Willis added. "We're using them to learn and build on and to help set us up for 2021."

North Alabama is one of just 15 FCS schools competing in football this fall, and one of just eight FCS teams playing four games or more.

Liberty will be the first FBS opponent that North Alabama has played since October 11, 1997 when, as an NCAA Division II school, UNA knocked off Louisiana-Lafayette on the road, 48-42 in four overtimes.

UNA is 2-2 all-time against FBS opponents.

North Alabama and Liberty are both members of the ASUN Conference in all sports with the exception of football. So while the two schools have faced each other the past two years in numerous other sports, this will be the first-ever meeting between the Lions and Flames in football. This will mark the third time that a North Alabama football team has played in the state of Virginia, with the Lions defeating Hampton in 1992, 33-21 in the Division II Playoffs. UNA then lost at Hampton 40-34 last season.

North Alabama, in its third season of a four-year transition to Division I, is coming a 4-7 record in 2019, which was the first losing season in football at the school since 2002. That broke a streak of 16 straight seasons with a .500 record or better. Three of UNA's 2019 losses were by a touchdown or less and Lions lost the other four games to nationally ranked teams on the road.

On the offensive side, the North Alabama receiving corp is expected to lead the way for the UNA offense in 2020. Over the last two years, redshirt juniors Dexter Boykin of Fairfield, Ala., Cortez Hall of Hoover, Ala., Jakobi Byrd of Florence Ala., and Andre Little of Anchorage, Alaska have combined for 298 catches for 4,336 yards and 29 receiving TDs for the Lions. In addition, the Lions return receiver Jack Peavey of Oxford, Ala., and tight ends Corson Swan of Spanish Fort, Ala., and Jakob Terry of Moulton, Ala., and have added Oklahoma State transfer receiver Patrick McKaufman.

UNA quarterbacks Blake Dever of Wellington, Fla., and Rett Files of Gulf Shores, Ala., have both seen action for the Lions but both are relatively inexperienced. Dever played in five games last season with one start at Kennesaw State. In that game he was 23-32-1 for 261 yds and one touchdown. He was 11-19-0 for 143 yards against Campbell. He previously played in eight games as a freshman at Savannah State and he played the 2018 season at Iowa Central Community College. Files only saw limited action in two games last season and in one game in 2018. He is 1-for-4 for six yards, with one interception for his career at UNA.

North Alabama returns eight lettermen who have game experience on the offensive line, but also has a group of transfers that have taken six of the top 10 spots on the depth chart.

UNA's group of returning offensive linemen are led by senior right guard Noah Stern of Huntsville, Ala., who has played in 24 games with 11 starts. Stern and red-shirt freshman Nathan Brown of Spanish Fort, Ala., are the only returnees expected to start. Brown played in two games in his redshirt season in 2019.

The Lions hope to improve their ground game from a year ago when UNA averaged just 84.8 rushing yards per game for the lowest average rushing total school history. Jaxton Carson of Phenix City, Ala., was slated to be the Lions' lead runner entering 2020 but was lost for the season due to a pre-season injury. Ja'Won Howell, who had 18 carries for 102 yards in 2019 is now UNA's starting running back.

On the defensive side, North Alabama returns eight defensive starters, including three of the four starters from the 2019 defensive line in Wallace Cowins, Jr., of Conyers, Ga., Devonte Toles of Pass Christian, Miss., and Brodric Martin of Tuscaloosa, Ala. Seven total lettermen are back on the defensive front and the Lions have added depth with the addition of transfers Terrell Townsend (San Jose State), Mike Boykin (Tennessee State) and Dakari Bickham (UTEP).

The linebacking corp is led by returning starter Will Evans of Haleyville, Ala., and is bolstered by the return of 2017-18 starter Christon Taylor of Hoover, Ala.. Evans had 49 tackles last season. Taylor had 62 stops in 2018 and returnee Jakob Cummings of Auburn, Ala., who is expected to be the third starter, had 29 tackles a year ago.

The defensive secondary includes returning starters K.J. Smith of Perry, Ga., Will Singleton of Hoover, Ala., and Jeffery Battle of Birmingham, Ala., but an influx of transfers will shake-up that starting lineup and give the Lions depth in the secondary.

Transfers Jonathan Jordan of Leland, Miss., Alonzo Craighton of Prairieville, La. and Kyree Fields of Columbus, Miss., are all competing for starting spots, along with 2019 redshirt Camyen Feagins of Phenix City, Ala.

Senior kicker/punter Joe Gurley of Killen, Ala., returns after handling almost all of the kicking duties in 2020. Redshirts Sam Contorno of Tuscaloosa, Ala.,  and Grayson Easterling of West Point, Miss., are expected to assist with much of the place-kicking duties this fall.

Following the game at Liberty, North Alabama will host its only home game of the fall against Jacksonville State on October 17. Kickoff for that game is set for 1 p.m. at Braly Stadium.