The Jacksonville State Gamcocks now have three scheduled games for the 2020 football season. The latest addition is Mercer. 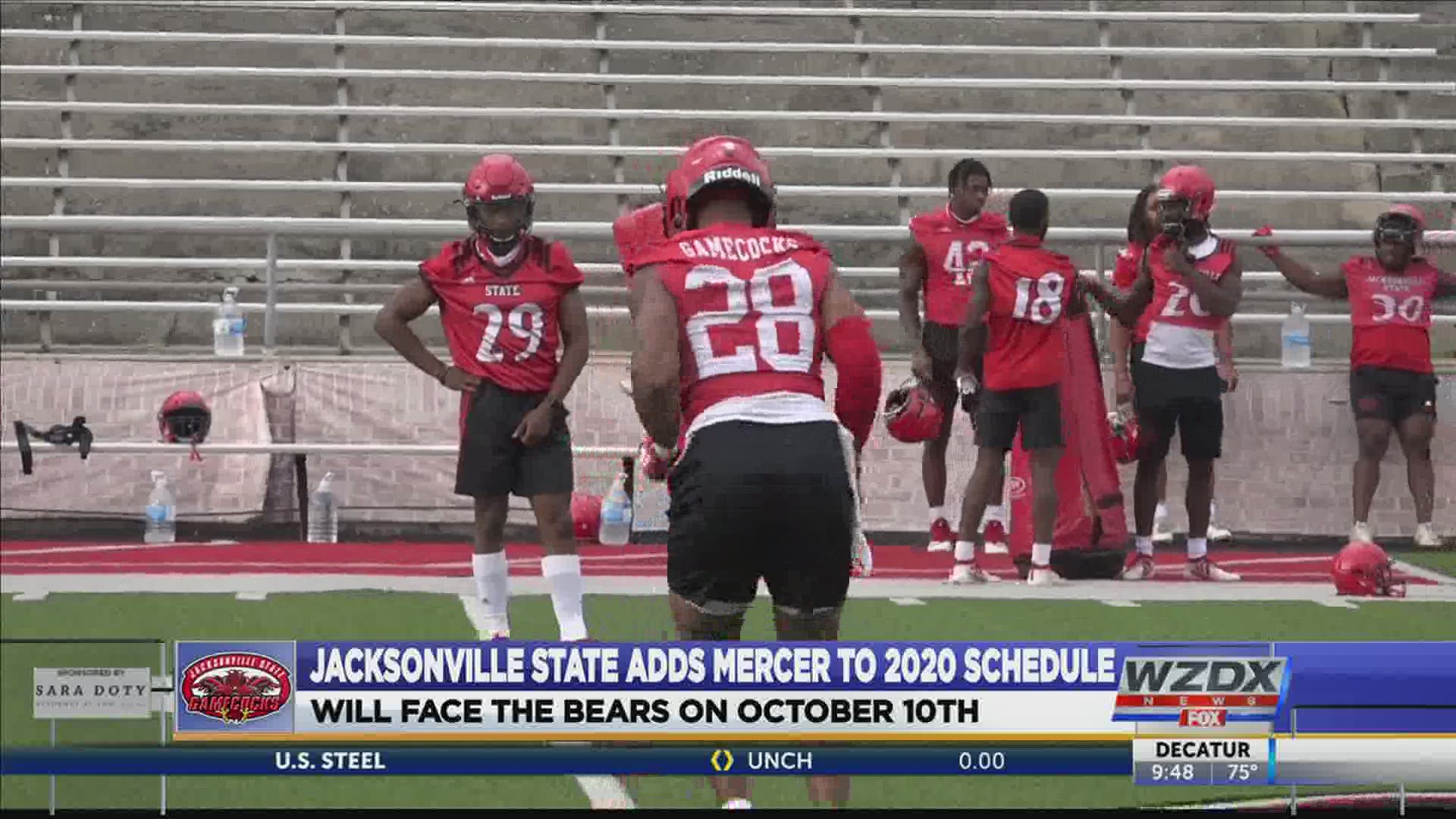 JACKSONVILLE, Alabama — The Jacksonville State football team will play two games in the state of Alabama this fall, hosting Mercer on Oct. 10 and traveling to North Alabama on Oct. 17.

The matchups were announced on Monday and will give Jacksonville State football fans the opportunity to watch the Gamecocks play close to home in back-to-back weeks this fall. Game times and ticket information will be released when those details are available.

The game against Mercer will be played at Burgess-Snow Field and secures one of the things Athletic Director Greg Seitz had at the top of his wish list when putting together the four non-conference games allowed by the Ohio Valley Conference during the fall.

"One of our top priorities in putting together the best four games possible for the fall was to make sure we were able to play at least one home game," Athletics Director Greg Seitz said. "I've said numerous times that we have the best fans in the FCS and for us to be able to give them a chance to see their team play in person was very important to us during this difficult season. This home game, along with the rescheduling of our game at UNA gives Gamecock fans two consecutive weeks where they can see us play."

The Gamecocks and Lions were originally scheduled to play on Sept. 12 at historic Braly Stadium in Florence, Ala., but the two agreed on the new date of Oct. 17 once uncertainties raised by the COVID-19 pandemic altered schedules across the country. It will be JSU's first trip to Braly Stadium since defeating Pittsburg State there in the 1992 Div. II National Championship Game.

Oct. 10 will mark the first meeting between the Gamecocks and Bears on the gridiron, but the two have a long history in almost every other sport. JSU and Mercer were both members of the Atlantic Sun Conference, but the league didn't sponsor football. Mercer reinstated its football program in 2013 after a 72-year hiatus.

On Aug. 14, the OVC Board of Presidents announced that fall competition and championships in the sports of football, men's and women's cross country, women's soccer and women's volleyball would be postponed due to the concerns and uncertainty surrounding the COVID-19 pandemic.

That announcement also included an opportunity for OVC institutions to compete in four non-conference football games in the fall. Monday's release by JSU comes less than a week after JSU and Florida State announced an Oct. 3 matchup in Tallahassee, Fla., and it gets the Gamecocks closer to finishing their fall schedule.

"As to football, the overwhelming majority of our athletes want to compete this Fall," Seitz said in a statement regarding the OVC's announcement on Aug. 14. "While the OVC moved the conference schedule to the spring, the conference presidents voted today to permit conference schools to play up to four non-conference games. We are working diligently to provide our football team the opportunity to play an exciting schedule this fall while maintaining the rigorous health protocols which were already established."

"We feel very good about the schedule that we've been able to put together so far," Seitz added on Saturday. "We are very close to wrapping up the schedule and look forward to finalizing our four games in the coming days."