Madison County graduate and current NAVY Quarterback Dalen Morris led the Midshipmen to a comeback win over Tulane on Saturday. 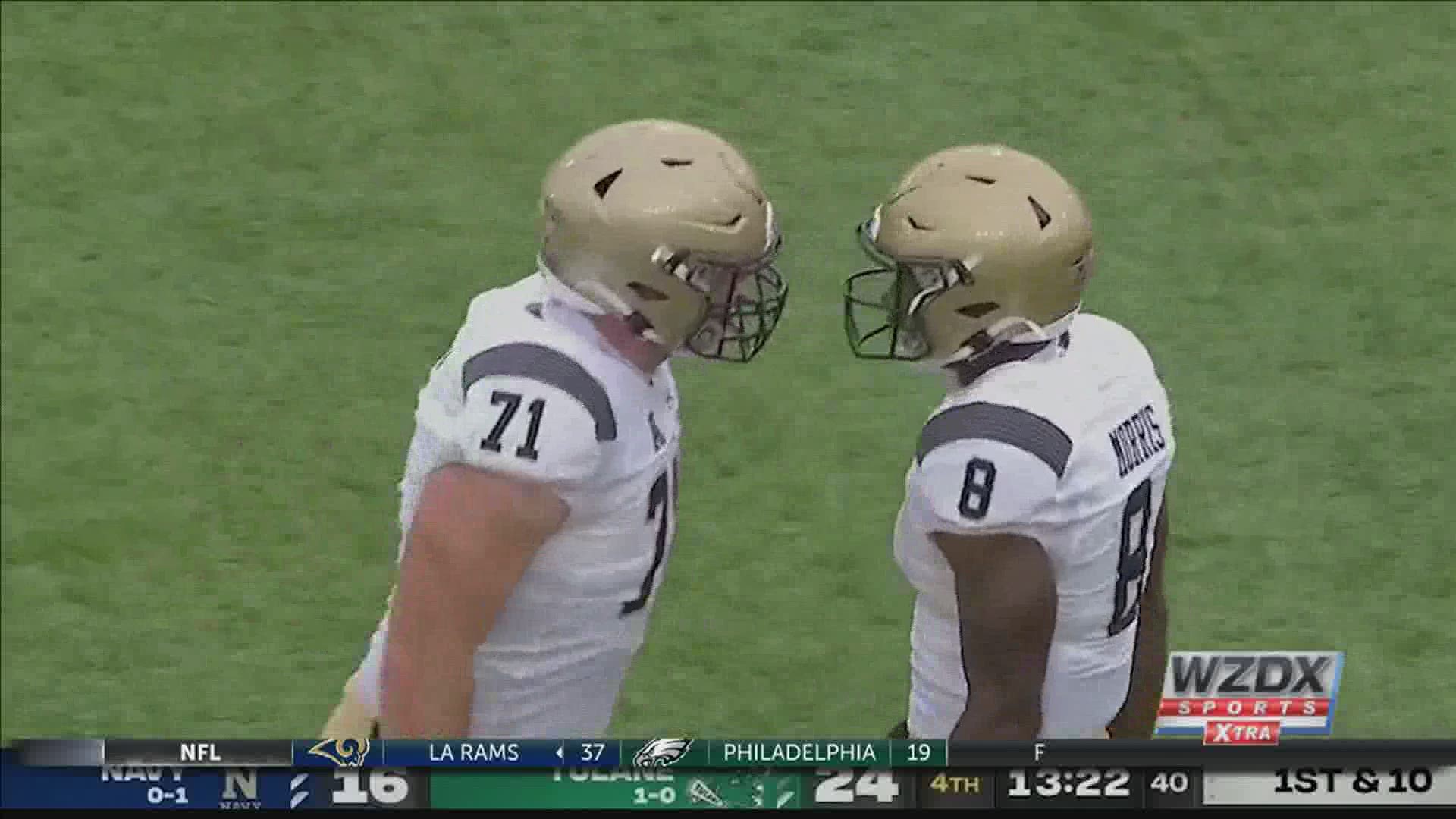 NEW ORLEANS — Cameron Kinley's interception near his own goal line kept Navy's 24-point hole from getting deeper and set the stage for previously benched quarterback Dalen Morris to win back his job by helping the Midshipmen stage a historic rally.

Morris, a graduate of Madison County High School,  passed 11 times, completing six for 139 yards and a touchdown. His 44-yard pass to Mark Walker set up Navy's first TD with 6:43 left in the third quarter.

"I don't have much to say other than, `Wow.' A testament to the young men at the United States Naval Academy," Navy coach Ken Niumatalolo continued. "These guys are going to protect us, serve our country. These are the type of young men that you have, that will not quit."

Navy (1-1, 1-0 American), which lost its opener 55-3 to BYU, ran just two plays in Tulane territory in the first half and looked in danger of being blown out again late in the second quarter.

"That first half looked like third half of the BYU game," Niumatalolo said. "We couldn't stop them and we couldn't move the ball an inch."

Tulane (1-1, 0-1) was threatening to build on a 24-0 lead before Kinley intercepted Tulane quarterback Keon Howard at the Navy 3. The turnover looked far more consequential as the game wore on and Navy stunningly seized control in the second half, when the Midshipmen outgained the Green Wave 291 yards to 82.

The interception was "the play of the game," Niumatalolo said. "It just gave us some life."

In the last seven minutes of the third quarter, the Midshipmen scored 16 points on two short Nelson Smith touchdowns and a safety. They tied it on Morris' 32-yard touchdown pass to Mychal Cooper, followed by a 2-point conversion, early in the fourth quarter.

Tulane looked primed to regain the lead with about five minutes left, but elected to throw a deep pass, which fell incomplete, on fourth-and-3 from the Navy 32.

"Obviously, we'd like to have it back," said Green Wave coach Willie Fritz, who endured his team's collapse in his first game since Tulane announced his seven-year extension, not to mention the first Tulane game broadcast on ABC in 40 years.

Navy kept the ball from there, driving in rainy conditions to the Tulane 16 before Nichols, who kicked a game-winner against Tulane last season, did it again.

"I was thinking about the game last year," Nichols said. "That's the most fun you can have as a kicker in football. It's really nice to be able to contribute at the end like that and I like the pressure on me."

Seeking a spark on offense after its lopsided loss a week earlier, Navy had benched Morris and started freshman Xavier Arline at quarterback. But he struggled to move the Midshipmen offense at Tulane. He did not attempt a pass and rushed seven times for 13 yards before being replaced by Morris in the first half.

"Being in that second game, knowing, this is your shot, I think I just played looser," Morris said. "I got back to being myself."

Navy's safety came when Evan Fochtman met Tulane's Cameron Carroll in the end zone and drove him backward on a first-down run from the Tulane 1.

Tyjae Spears rushed for 119 yards and Carroll rushed for touchdowns of 3 and 24 yards for Tulane.