Dariauna Lewis had a double-double of 18 points and 12 boards in the Lady Bulldogs 76-69 win. Jalen Johnson's putback basket lifted AAMU to a 56-55 win for the men. 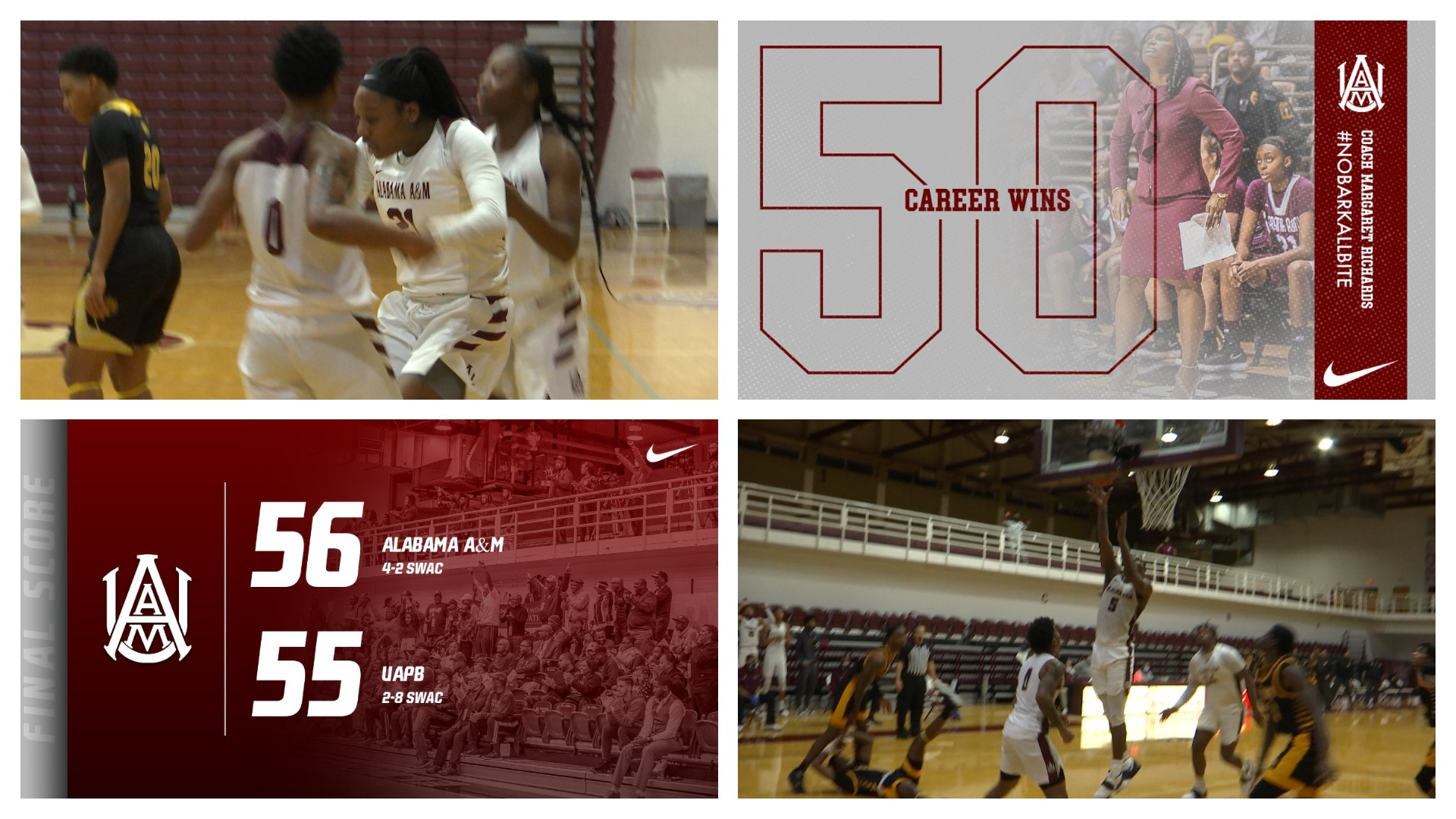 HUNTSVILLE, Alabama — Dariauna Lewis had a double-double of 18 points and 12 boards in the Lady Bulldogs 76-69 win. Jalen Johnson's putback basket with 20 seconds left lifted AAMU to a 56-55 win for the men.

Freshman guard Darian Burgin (Cincinnati, Ohio) dropped a career-high 21 points with five rebounds and a pair of steals to lead the Bulldogs while junior forward Dariauna Lewis (Omaha, Neb.) hauled in a double-double of 18 points and 12 boards to go with a block and a pair of steals.

Senior guard Nigeria Jones (Lincoln, Neb.) produced 16 points and dished out eight assists and redshirt-junior center Elexis Evans (Greensboro, Ala.) and senior guard Deshawna Harper (Indianapolis, Ind.) would not be far off as both just missed double-doubles of their own. Evans posted 13 points and seven caroms, along with three assists, and Harper finished with 10 points and seven rebounds to round out the top performers.

The Bulldogs would methodically pull out to an 8-4 advantage over the first 6:58 of the game before a bucket by Khadijah Brown sliced that margin in half. A three by Burgin would ignite a 7-4 stretch that would then extend the lead to 15-10 with 49 seconds on the clock before a jumper by Brown made it a three-point deficit entering the second period.

A game that barely managed double-digit points over the first seven minutes quickly turned into one looking to set a land speed record as both clubs adopted an up-and-down style that would see both score over 20 points in the frame.

UAPB came with back-to-back baskets to take a 16-15 lead in the opening minute before the teams traded the next three buckets to leave A&M with a 19-18 advantage. That last one of those would be the first of four straight scores that would power an 8-0 run that left the Bulldogs with a 25-18 lead just under three minutes into the frame.

The Golden Lions would bounce back with a three from Kaila Walker to narrow it to four points but it wouldn't last as Alabama A&M scored 10 of the next 12 to push to a 35-23 advantage with 4:08 showing on the clock. The tide would then turn dramatically as UAPB mounted a 15-4 rally that was capped by a bucket with six tenths of a second left and sliced the Bulldogs' lead to just 39-38 at the break.

Having seen their lead evaporate over the final four minutes of the first half, A&M came out on fire to start the second half with another 8-0 run, this time extending to a 47-38 margin by the 8:11 mark. That lead would eventually grow to 11 points on a pair of occasions before settling at 59-49 heading to the fourth.

Brown led the way for Arkansas-Pine Bluff with a double-double of 20 points and 11 rebounds while Walker finished with 15 points. Tyler Pyburn added 14 points on 5-of-9 shooting and Trasity Totten chipped in with seven points and five caroms. Ashlynn Green notched five points and three steals while Maya Peat had six points and four boards.

The Bulldogs now begin a home-and-home with rival Alabama State as they head to Montgomery on Saturday, February 13. Following that 2 p.m. matchup they will welcome the Hornets back to Elmore Gymnasium for a 5 p.m. contest on Monday, February 15.

Coming out of a timeout trailing 55-54 with 31 seconds to play Johnson missed a free throw line jumper, yet grabbed a loose ball rebound and stuck it in to put the Bulldogs up 56-55 with 22.3 seconds remaining, forcing a Golden Lion timeout. Out of the break, A&M made two more defensive stops to pull out the 56-55 win.

Johnson led the Bulldogs with a game-high 22 points on 10-of-18 shooting from the field along with grabbing seven rebounds, while freshman guard Jevon Tatum (Snellville, Ga.) scored in double figures for his second straight game, adding 10 points and eight rebounds on the night.

The visiting Golden Lions started out hot, scoring the first eight points and holding the Bulldogs scoreless for the first four minutes of the game, before senior forward Brandon Houston (Birmingham, Ala.) opened the scoring for A&M with a three at the 15:38 mark in the first.

After a free throw from Arkansas Pine-Bluff's Terrance Banyard, sophomore guard Garrett Hicks (Madison, Ala.) put in a floater to make the score 9-5 before five unanswered points put the Golden Lions up 14-5 heading into the under 12-minute media timeout.

With 10:38 to play in the opening frame, Tatum scored his first basket of the night followed by a layup from Johnson to bring the Bulldogs within five; however, UAPB responded on their next possession and found themselves up 18-11 with just over nine minutes remaining in the half.

With just over four minutes to play in the frame the Golden Lions extended their lead to double figures, 22-12, on an inside score from Dequan Morris, before the Bulldogs climbed within six at the 3:08 mark behind scores from junior guard Brandon Powell (Huntsville, Ala.) and Tatum.

Coming out of the break, the two teams traded a pair of free throws to open the first minute of the second, and also traded back-to-back dunks, one from Banyard of UAPB and one from Johnson of A&M with 18 minutes to play to make the score 29-25.

From there, Arkansas-Pine Bluff stretched their lead back out to nine after a three from Markedric Bell, before Johnson scored inside for A&M to reach double figures and bring the score to 34-27 with 14:42 remaining.

On the next Bulldog trip, Hicks pulled the difference to four as he sank his first triple of the game, followed by a layup from sophomore guard Cameron Tucker (Birmingham, Ala.) to reduce the deficit to two, 34-32.

The Golden Lions responded again, scoring inside at the 13:28 mark and going on a 6-2 run over the next two minutes to go up 40-34 heading into the under 12 media timeout.

With eight minutes to play, freshman guard Dailin Smith (Colorado Springs, Co.) sank a three to spark a five-point run for the Bulldogs pulling them within four, 44-40, a deficit they would reach once more with seven minutes to go after a pair of free throws from Tatum to put the score at 46-42.

A&M reduced the lead to one score twice over the next two minutes behind consecutive inside scores from Johnson, and tied the game for the first time at 48-48 with 4:39 to play following a pair of free throws from Powell.

With just under four to go, Johnson scored inside again to take the first Bulldog lead of the game, however the Golden Lions responded to tie before Smith made his second field goal of the game, putting A&M up 52-50 at the 2:29.

After finding the score tied for the final time at 52-52, Johnson scored his 20th point of the night with 1:14 to go, however UAPB's Shaun Doss responded on the next possession with a three to give the Golden Lions a one-point lead and forcing a Bulldog timeout with 40 seconds left.

The Bulldogs will now head to Montgomery to face rival Alabama State on Saturday, February 13.