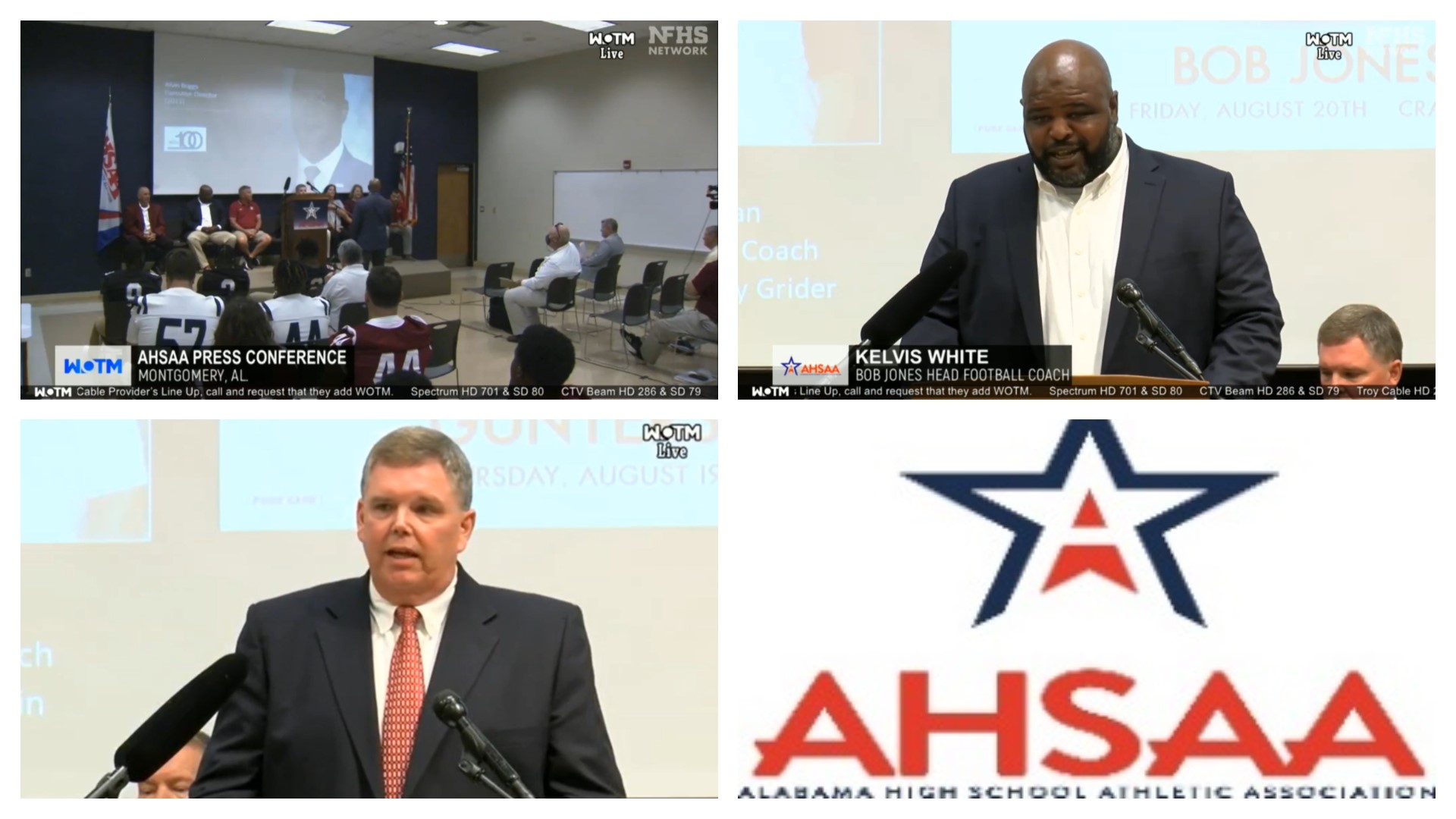 MONTGOMERY, Ala. — The enthusiasm was high Tuesday at the AHSAA Kickoff Classic press conference as all four head football coaches met the media. More than 50 media representatives attended the AHSAA annual Media Day prior to the press conference.

Handley Coach Larry Strain, who guided his Tigers to a 12-1 record and the Class 4A state title in 2020 made it clear. “Football is very important in our community of Roanoke,” he said. “Last year we had four games canceled due to COVID and we played most of the season on the road. Our kids are eager and so is our town.”

The Tigers (12-1) meet Guntersville (10-1) in the AHSAA’s season-opening 2021 Kickoff Classic clash at Cramton Bowl on Thursday night, August 19, at 7 p.m. Class 7A Dothan and Bob Jones square off in game two of the Kickoff Classic the following night, Friday, Aug. 20, also at 7.

Both games will be televised live by the AHSAA TV Network and live-streamed over the NFHS Network with AHSAA partner WOTM TV producing both contests under the guidance of executive producer Vince Earley. Both games will also be broadcast live over the AHSAA Radio Network. Brandon Dean, Director of the Alabama High School Athletic Directors & Coaches Association (AHSADCA) introduced the coaches to the media on hand Tuesday, but not before Montgomery Mayor Steven Reed had a chance to tell them how much these games mean to his city.

“High school sports is very special to me,” said Reed. “The life-long lessons I learned (in high school at Jeff Davis) and the two-a-day practices still stick with me. You remember those things that are now still very special to me. I am glad we can have these games in our city.”

“We appreciate Mayor Reed for sharing memories and voicing his commitment to our high school events like the Kickoff Classic,” said AHSAA Executive Director Alvin Briggs. “He knows first-hand how important high school sports and other activities can be to the students and communities.”
Handley, which is coming off a 12-1 season and a 35-20 win over Gordo in the Class 4A state championship game last December, is led by senior running back Tae Meadows, who ran for 2,183 yards and 33 touchdowns in 2020. He had 38 carries for 264 yards and four TDs in the Super 7 finals at Bryant-Denny Stadium to earn 4A MVP honors.

Guntersville Coach Lance Reese, who guided the Wildcats to 10 straight wins in 2020 before falling to eventual state runner-up Pleasant Grove in the second round of the playoffs, can counter with an offense that returns several key starters and averaged 49 points a game.

“After last year’s season, the Kickoff Classic and an outstanding opponent like Handley gives us a sense of urgency,” said Reese.
Handley’s only loss in 2020 was to Class 5A power Central of Clay County 15-14. The storied Handley program has compiled s 547-447-28 record in 100 seasons, which includes 11 years with 10 or more wins.
Guntersville’s storied program has compiled a 617-406-21 record in 105 seasons with 74 of those years resulting in winning records.
Dothan (2-7) and Bob Jones (3-7) were both affected by the COVID 19 pandemic last season – struggling to find consistency each week due to the interruptions.

This year, Wolves Coach Smitty Grider said his team decided to have reset of sorts. “This is just our third season as a school since we merged with Northview in 2018,” he said. “We decided to approach this season like it is our first. The kids have really bought into that idea and are really working hard.”

His squad a talented, especially at the skill positions where Javierre Jackson is starting at quarterback and Raymon Blackmon is shining at wide receiver. Henry Za is also back at linebacker.
“We went into quarantine on the Monday prior to jamboree game scheduled with Hoover last year and was unable to practice for 14 days,” he said.  “We started looking for a game this year and agreed to go to Bob Jones. But when we were picked for the Kickoff Classic, that made a lot of sense for us to play at Cramton Bowl.”

With 13 returning starters, the Patriots are looking to bounce back from a challenging season in 2020. This year’s team has a unique combination of both youth and experience, with a number of younger players returning with experience on Friday nights as well as a group of seniors who had significant roles last season. Among the players returning are offensive lineman Collin Jones and linebacker Jaden Edwards.  Junior receiver K.J. Fields is the real deal — and for good reason. His dad set the Alabama A&M receiving record while in college.