Aqeel Glass threw six touchdown passes and ran for another score to lead Alabama A&M to a 52-43 victory over Jackson State. 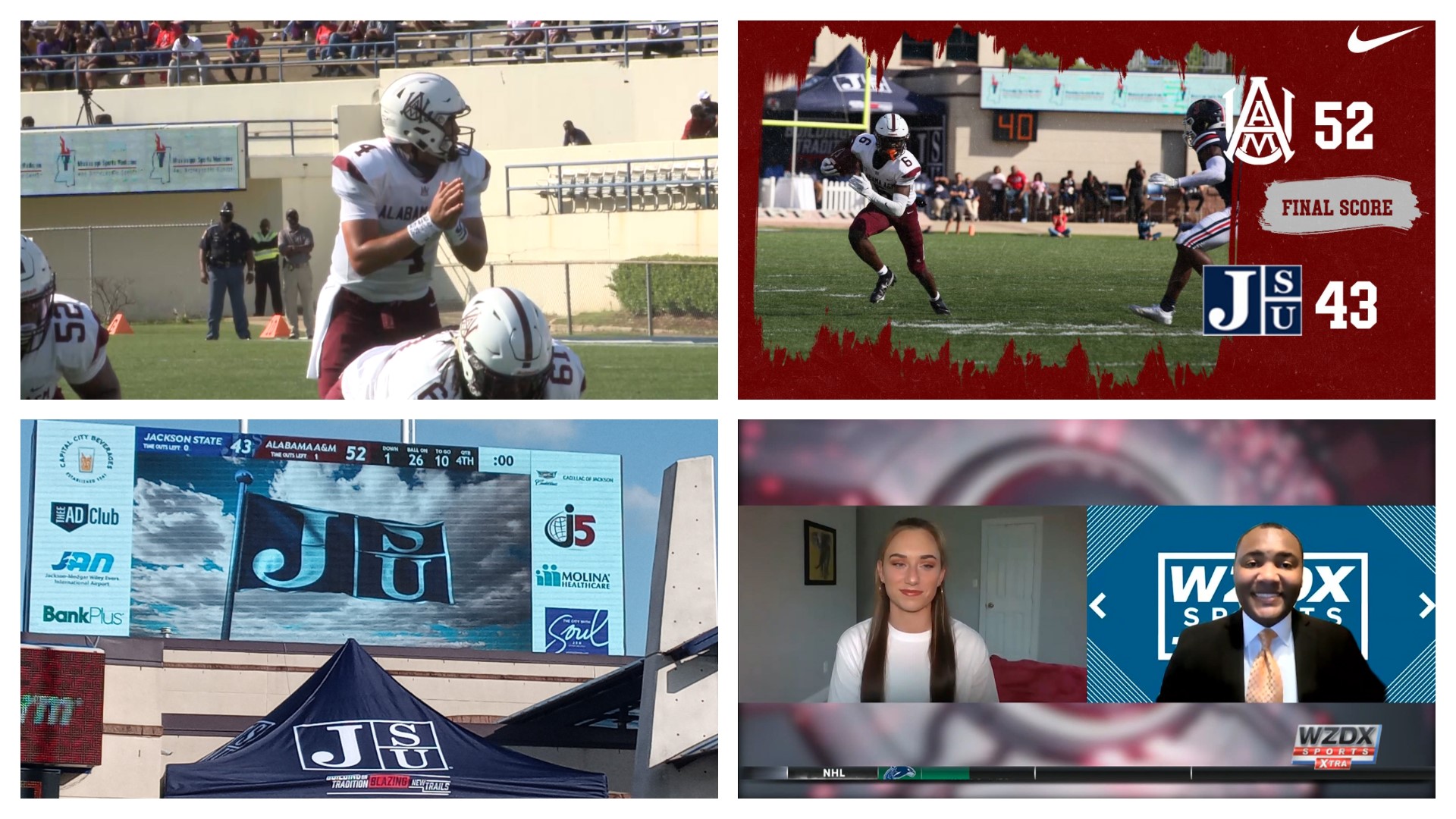 Senior quarterback Aqeel Glass (St. Louis, Mo.) delivered a day for the ages and Alabama A&M put up the most points against a Division I opponent in 12 years as they defeated past Jackson State 52-43 on Saturday, April 10.

Glass went 27-of-40 with no interceptions and set career-highs with 440 yards passing and six touchdowns while adding a seventh on the ground to lead the Bulldogs offensive attack while senior wide receiver Zabrian Moore (Tuscaloosa) was the recipient of four of those receptions for 114 yards and a touchdown.

Junior running back Gary Quarles (Cottondale, Ala.) added 47 yards receiving on three grabs to go with his team-high 86-yards rushing and redshirt-junior tight end Anthony Howard (Birmingham, Ala.) snagged the final touchdown of the day.

As a whole, the offense accomplished something only done nine times since the program moved to Division I in 1998 and that is score at least 50 points. The DI Era program record is 63 in a 63-20 victory over Division II Central State on September 28, 2019 but the Bulldogs' 52 points on the day are the most against a Division I opponent since hanging 58 (58-23) on Mississippi Valley State on November 21, 2008.

Getting the ball back to fuel that prolific offense on a good many occasions was an A&M defense that delivered four sacks and eight tackles for loss. Headlining that group were junior defensive end Marcus Cushnie (Broward County, Fla.) and senior linebacker Armoni Holloway (Pinson, Ala.) with one of each and four tackles apiece.

Despite the 35-day layoff, there was no rust as the Bulldogs took the ball 74 yards on their first possession of the game to go up 7-0 with just 3:10 gone by. Glass delivered back-to-back connections with Jenkins, Jr. and Hilarie with strikes of 15- and 23-yards before hitting Ibrahim on a nine-yard score.

The Tigers would respond late in the quarter as they pounded out 31 yards on the ground as part of an eight play, 66-yard drive that would see Warren Newman scamper into the endzone from six yards out at the 2:33 mark.

That 7-7 deadlock would stay in play until JSU caught lightning in a bottle with their first drive of the second quarter. That would come in the form of Santee Marshall, a player just elevated from the scout team, that broke loose on the sideline for a 54-yard touchdown run to put the Tigers up 14-7 with 13:37 showing on the clock.

It wouldn't stay that way long as A&M would match that long play capability on their next drive. Glass completed a pair of mid-range passes before lofting a touch pass over a defender out to the flat to Quarles. The speedy back would then break free, cutting it back inside for a 43-yard touchdown to knot it up at 14-14 at the 12:14 mark.

The shootout would continue as AAMU forced a 3-and-out and then answered the bell again as Odieu caught a ball for 17 yards and the Bulldogs benefitted from a personal foul to get down to the Tigers five-yard line. From there, on what appeared to be a busted play, Glass improvised as he tucked and ran it in himself for a 21-14 lead just under seven minutes into the second quarter.

Jackson State came right back, however, going eight plays and 53 yards on a drive that was capped by a 17-yard touchdown grab by Newman that tied it at 21-21 with 4:32 left in the half. That would still not come close to what Glass and the Bulldogs had on tap, however.

On their very next possession Glass hit Ibrahim for 19 yards before turning it loose for a 61-yard, in-stride connection to Moore for a go-ahead touchdown, all in just 38 seconds. That 28-21 lead would then hold up over the final 3:45 as the teams headed to the locker room with that margin on the scoreboard.

It would be a margin that would continue to grow over the opening minutes as A&M shutdown the Tigers on their opening drive and then resumed their assault on the scoreboard. A 35-yard strike to Ibrahim, followed by another personal foul on the defense, quickly moved the Bulldogs down to JSU's 11-yard line. From there Glass rifled one into Hilaire to stretch to a 35-21 lead by the 12:04 mark.

Quincey Casey and JSU answered right back with a five-play, 61-yard drive that capped off with a 24-yard touchdown pass to Daylen Baldwin just 2:15 later. Redshirt-junior kicker Spencer Corey (New Palestine, Ind.) would tack on a 34-yard field goal at 3:41 to extend to 10-point margin, 38-28, and it would stay there until early in the fourth quarter.

Glass would once again do damage, this time leading a seven play, 75-yard drive that he capped off with a 25-yard strike to Ibrahim to push it to 45-28 at 14:29. Midway through the frame the Tigers would find the endzone again as Casey connected with Newman from seven yards out but Glass and the A&M offense were not done yet.

A 27-yard strike to Hilaire and 17-yard connection with Jenkins, Jr. helped move the ball deep into JSU territory before Glass drilled one to Howard for a four-yard TD with 2:49 to play.

Aided by a pair of personal foul penalties, the Tigers then went 67 yards in five plays, culminating with a seven-yard touchdown to Newman. Following a two-point conversion, that drive cut the deficit to 52-43 with 1:29 to play. They would get no closer, however, as the Bulldogs then salted away the final seconds for the nine-point victory.

Casey led Jackson State as he went 30-of-47 with 323 yards and four touchdowns in his first start of the year while Marshall rushed 19 times for 126 yards and a touchdown. Newman caught nine balls for 68 yards and three touchdowns and added another on the ground and Baldwin snagged six for 135 yards and a score. Christian Allen and Corey Reed, Jr. each added six catches for 80 and 43 yards, respectively.

Defensively, Keonte Hampton had nine tackles, one for loss, and Markel Gladney and Justin Ragin split a sack with the latter having 2.5 TFLs. Kevin Berthey had eight tackles and Aubrey Miller, Jr. and Khalil Arrington each had seven.

After having returned in midseason form following a 35-day layoff, Alabama A&M faces one of their toughest challenges as they take on rival Alabama State in the Magic City Classic next week. Set for Saturday, April 17 at Birmingham's venerable Legion Field, kickoff for that game is set for 6:30 p.m. and will be aired live on ESPNU.