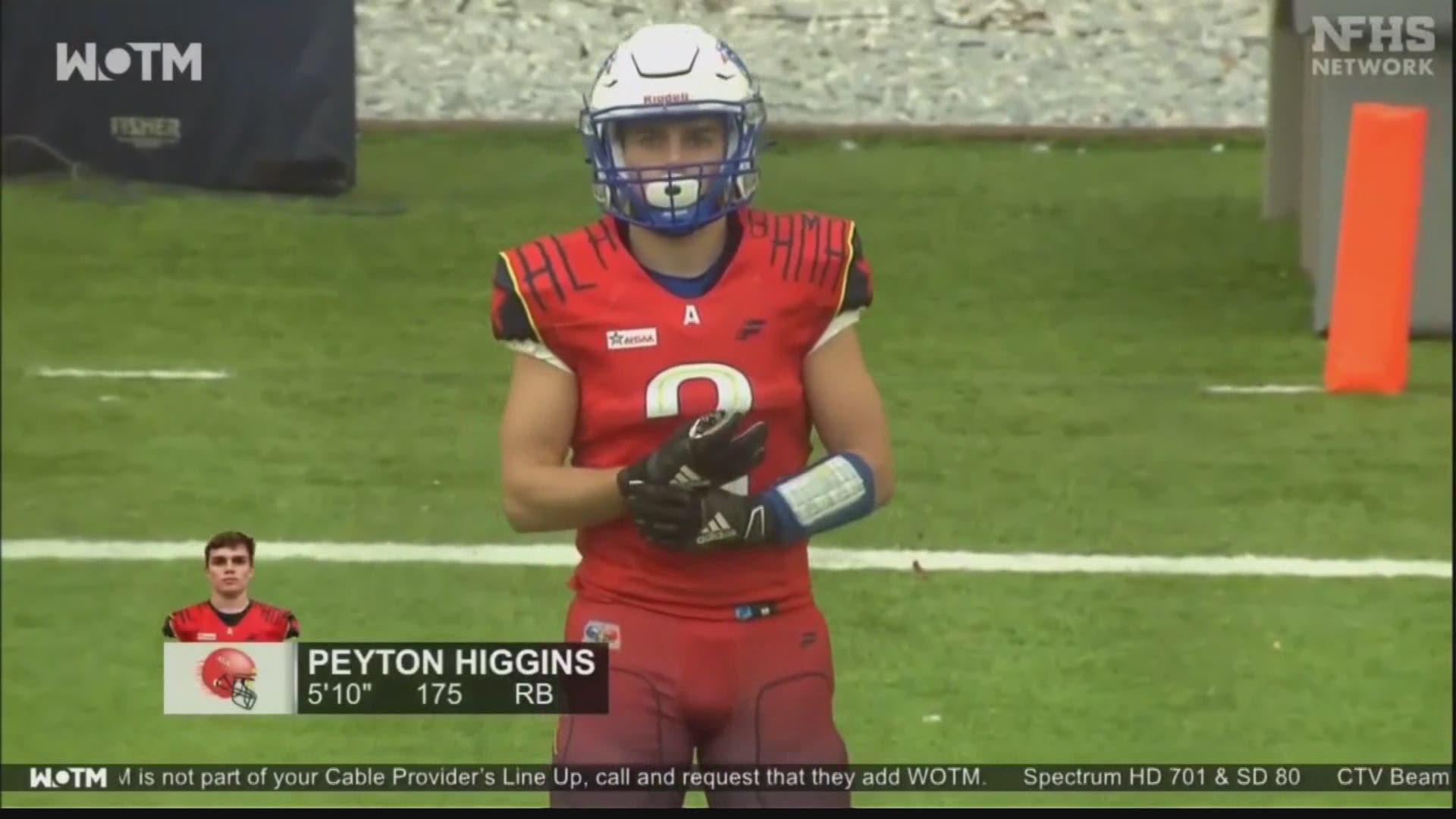 The AHSAA and Alabama High School Athletic Directors and Coaches Association (AHSADCA) manage the game with the Mississippi Association of Coaches (MAC). The series started in 1988 with Alabama winning three overtimes 24-21. The 34th game Saturday improved Alabama’s record in 23-11 overall.

Alabama got two interceptions from McKinstry and Saraland DB Terrente Hinton and one by Auburn’s Noah Warren. The three standouts had 120 yards in interception return yardage.

The hosts got their first break when Hinton picked off a Mississippi pass on the second play of the game to give Alabama the ball at the Mississippi 15-yard line. However, Mississippi’s defense stiffened and on fourth down at the 10, Spain Park place-kicker Drake Tabor missed wide left on his 28-yard attempt.

Alabama took a 7-0 lead late in the first quarter when quarterback Will Crowder of Gardendale found big-play receiver Christian Lewis of Pleasant Grove in the right corner of the end zone for a 28-yard touchdown to cap a five-play, 63-yard drive at the 1:33 mark. Alabama, which 238 total yards in the first half, took a 10-0 lead late in the second quarter when Tabor booted a 25-yard field goal to cap a 14-play, 82-yard drive with 1:07 left before intermission.

McKinstry, considered Alabama’s top recruit for the Class of 2021, turned in the most exciting play of the game on what was unofficially the last play of the first half when he intercepted a Mississippi pass at the Alabama 3-yard line, made an incredible spin move to evade two tacklers and then sprinted 97 yards for a touchdown. The score was called back on a blind-side block penalty and Alabama got one untimed down for the effort to end the half with the 10-point lead.

McKinstry also had two catches in the first half for 51 yards – including a 43-yarder for the longest reception in the game. He finished with three catches for a team-leading 76 yards. He also had 26 yards in interception returns officially, netting no yards on his 97-yard return due to a penalty and sprinting 26 yards before stepping out of bounds in the final minute to end Mississippi’s last possession.

Tabor actually had two tries for the field goal – his first was blocked by Mississippi and in a strange turn of events, was returned for a touchdown by Keyzhawn Lawrence of Starkville but the play was challenged and nullified when Ole Miss was called for rushing too many defenders on the kick as per special Alabama-Mississippi All-Star game rules. Lawrence, who was named the Mississippi game MVP, followed up midway in the fourth quarter with a 94-yard fumble return to cut the Alabama lead to 13-7. He finished with a game-high 12 tackles.

Alabama answered with Lewis making a spectacular grab of Crowder’s 11-yard pass and then tight-rope walking the end zone line for his second TD. He finished with four catches for 57 yards.

Alabama had 19 first downs, 61 offensive plans and kept the ball for 28:35 of the game’s 48 minutes. Crowder finished 9-of-12 passing for 152 yards and  two TDs. Trey Higgins of Oxford was 6-of-9 for 95 yards as Alabama finished 15-of-21 overall for 247 yards. Jay’Juan Townsend of Eufaula also had three receptions for 25 yards and Jordan Mosley had one catch for 30 yards. Hewitt-Trussville’s Armoni Goodwin led all rushers with 68 yards on 11 carries. Tabor kicked two field goals and punted twice for 46.5 yards. Defensively, Hinton, Lee Hunter of Blount, Ian Jackson of Prattville and Deontae Lawson of Mobile Christian had five tackles each for Alabama.
Mississippi quarterback Ty Keyes of Taylorsville completed 11-of-22 passes for 66 yards but was intercepted three times. He also rushed for 17 yards on five carries. Lawrence’s 12 tackles anchored Mississippi’s defense. Tyveris Cooper of Louisville added 8 stops and Tristan Shorter of Oxford (MS) had seven tackles. Mississippi’s head coach was Derrick Hooker of South Delta.