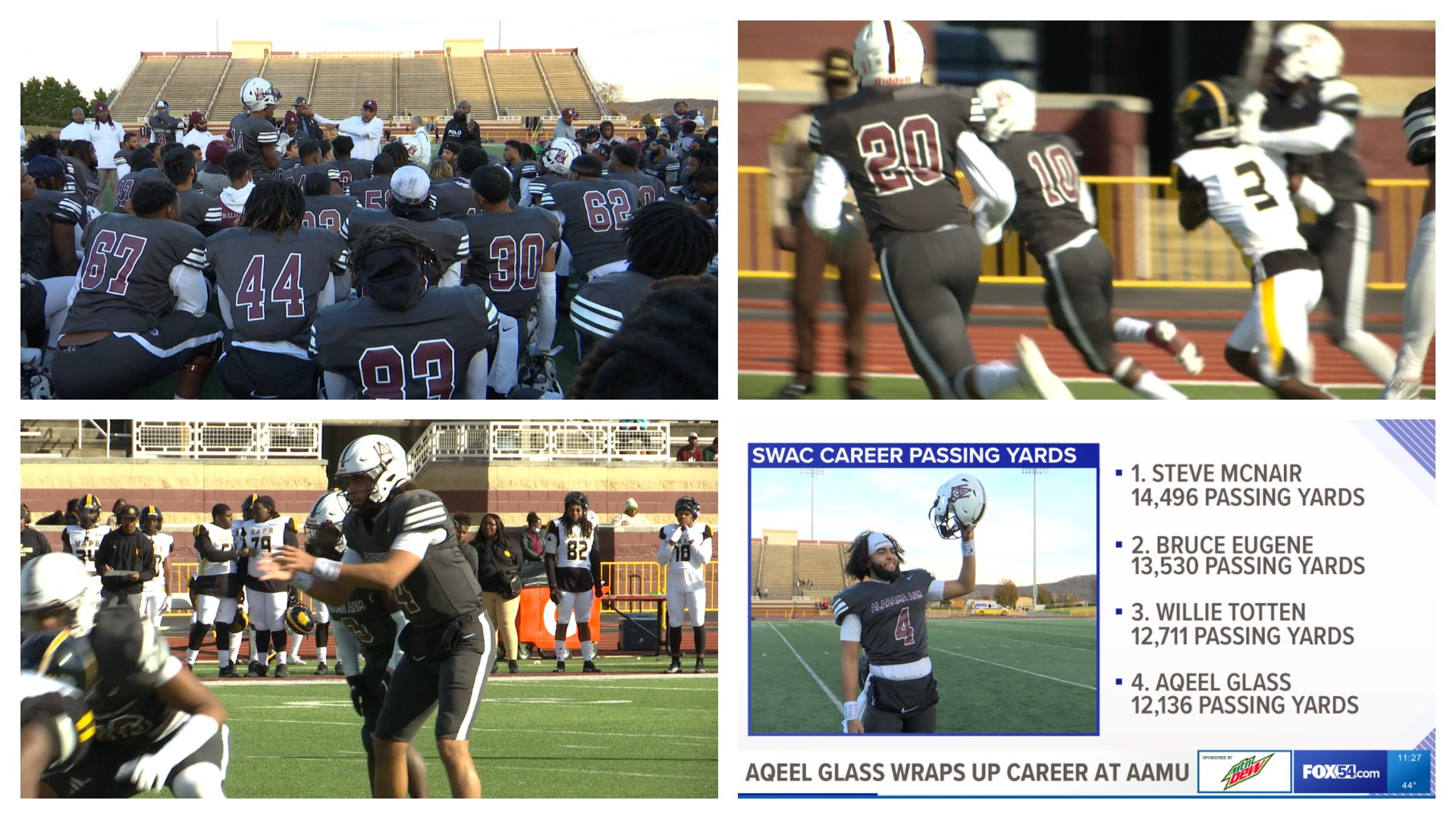 HUNTSVILLE, Ala. — On a day that Alabama A&M (7-3, 5-3 SWAC) honored 22 seniors, one of those individuals playing in their final game delivered one of the best games of their career as the Bulldogs notched a 52-24 victory over Arkansas-Pine Bluff (2-9, 1-7 SWAC) in an NCAA Division I football game on Saturday, November 20.

THE STATS - ALABAMA A&M
In one of the many great performances of his career, graduate quarterback Aqeel Glass (St. Louis, Mo.) lit it up for 450 yards, six touchdowns and no interceptions as he went 26-of-33 in his final game as a Bulldog. The six TDs tie his career-high and he finishes his career with 12,136 yards passing and 109 passing touchdowns, both A&M records.

Senior wide receiver Zabrian Moore (Tuscaloosa, Ala.) registered a pair of catches, taking one to the house from 53-yards out, to finish with 60 yards on the day and sophomore tight end Bryson Clark (Delray Beach, Fla.) and senior wideout Dee Anderson (Dallas, Texas) each added a TD grab.

Senior running back Gary Quarles (Cottondale, Ala.) led the ground game with 37-yards and finishes the season with 10 touchdowns and 955 yards. Sophomore tailback Ryan Morrow (Maplesville, Ala.) added a score to round out the top offensive players for the Bulldogs.

Defensively, graduate safety Trenton McGhee (Jacksonville, Ala.) recorded seven tackles, a sack, forced fumble and tackle for loss while graduate cornerback Amari Holloway (Pinson, Ala.) had a pick and six stops. Sophomore linebacker Dimitris Biamby (Coral Gables, Fla.) was in on seven tackles, one for loss, and graduate defensive tackle Breon Austin (Eufaula, Ala.) had four tackles, including 1.5 in the backfield.

Sophomore punter Troy Lendvay (Montreal, Quebec, Canada) was called on to punt only twice but delivered both times, finishing with a 45.0 average. He not only placed one within the 20-yard line, he banged a 56-yarder to the one-yard line to set up the offense in the first quarter and begin what would be the program's 11th game with at least 50 points since moving to the Division I level in 1998.

THE GAME
Neither team would get anywhere on their first two drives but a 56-yard punt by Lendvay on the Bulldogs' second possession promptly pinned the Golden Lions at their own one-yard line for their second time with the ball. They wouldn't keep it long.

Following a stuffed two-yard run and an incompletion, Amari Holloway stepped in front of a Skyler Perry pass at the 15-yard line and ran it back to the eight to put A&M in business. It would take all of two plays before Glass rifled one to the 6-6 Anderson for this 12th touchdown of the season, this one coming with 7:40 on the clock and putting the Bulldogs up 7-0 early.

UAPB would manage just seven plays and 34 yards before giving the ball back to Alabama A&M right at midfield. Glass would then hit Hilaire on a 28-yard strike as part of a seven-play, 49-yard drive that ended with Ibrahim hauling in a seven-yard catch in the endzone to stretch to a 14-0 advantage by the 1:45 mark.

After seeing it be all Bulldogs in the opening 15 minutes, the Golden Lions took just 2:35 to cover 75 yards in seven plays with Perry connecting with Josh Wilkes on a 17-yard touchdown strike just 50 seconds into the second period.

Having seen their lead cut in half, A&M responded immediately as Glass hit Hilaire on a 62-yard bomb on the fourth play of their ensuing drive to make it 21-7 just a minute and a half later. Arkansas-Pine Bluff then delivered a methodical nine-play, 72-yard drive that featured 37-yards on the ground from Kierre Crossley, the last two putting him in the endzone to draw to within seven by the 8:10 mark.

A botched kickoff then gave the Bulldogs excellent starting field position at the UAPB 33-yard line and it would take Glass just four plays to extend the lead. That would come in the form of a 16-yard touchdown pass to Clark just a minute later and make it 28-14. The teams would continue to trade blows as the Golden Lions used a 34-yard Crossley run to get in position for a 30-yard field goal by Zack Piwniczka to cut it to 28-17 with 4:50 showing on the clock.

The Bulldogs weren't done yet, however, as Hilaire snagged a 31-yard reception to fuel a nine-play, 75-yard drive that saw Morrow hit paydirt from one yard out to push to a 35-17 advantage, a margin they would take to the break 1:45 later.

UAPB would take the opening possession of the second half and proceed to march down the field, chewing up 3:55 behind 10 plays that covered 75 yards. It would be a possession that would be capped off by Perry, not with his arm but with his legs, as he broke free for a 30-yard TD. The score would stay at 35-24 as neither team could get anything going on their next drives but that would change with just under seven minutes on the clock.

Glass would continue to torch the Golden Lions defense, hitting Hilaire for 17 yards and Ibrahim for 20 before drilling a 19-yard strike to the latter that saw him end up in the endzone to extend to a 42-24 margin by the 4:13 mark. Following a three-and-out by UAPB, Alabama A&M would go right back to work with another 19-yard completion to Ibrahim and a 53-yard laser to Moore, who shot down the far sideline for the score and a 25-point advantage with 1:19 showing on the clock.

After three quarters with at least 14 points, the fourth would be the polar opposite. Following a 52-yard rifle to senior wide receiver Terrell Gardner (Birmingham, Ala.) that setup a 24-yard field goal by graduate kicker Spencer Corey (New Palestine, Ind.), the teams would combine for just 127 yards of offense and trade turnovers before A&M salted away the 52-24 victory.

THE STATS – ARKANSAS-PINE BLUFF
Crossley led the way for the Golden Lions, amassing 131 yards on 22 carries, one for a touchdown, while Perry was 22-of-42 for 220 yards, a touchdown and a pick. The latter, however, would be far more effective on the ground, picking up 85 yards and a touchdown. Tyrin Ralph led the wide receiver corps with 90 yards on four catches and Wilkes had seven grabs for 54 yards and a score.

On the defensive side of the ball it would be Monroe Beard III with eight tackles, 1.5 in the backfield, and Nathan Seward with eight stops. Timon Akins added seven tackles and a TFL while Isaac Peppers equaled him with that tackle total. Raequan Prince rounded out the top defensive performers with a pick for 47 yards and Josh Sanchez drove four punts 172 yards for a 43.0 average.

UP NEXT
With the win, A&M closes the 2021 season with a four-game winning streak, a stretch that saw them average 47.0 points per game. Overall, including the Spring 2021 campaign, the Bulldogs end the calendar year with a stellar 12-3 record.