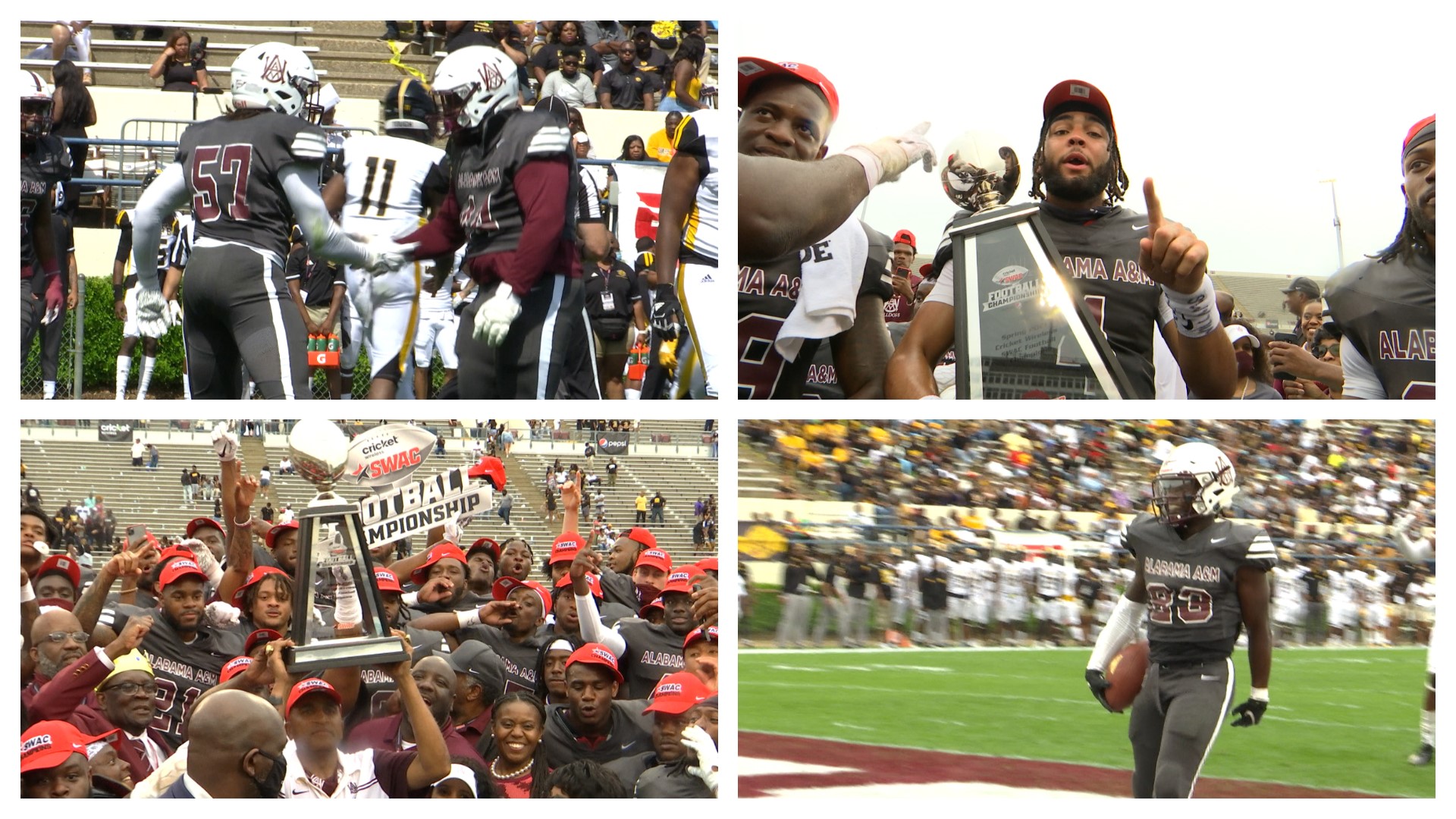 JACKSON, Miss — In a history making season for so many reasons, No. 22 Alabama A&M (5-0, 3-0 SWAC) capped it off with one of the biggest wins in program history as they claimed the Spring 2021 Cricket Wireless Southwestern Athletic Conference (SWAC) Football Championship with a thrilling 40-33 victory over No. 25 Arkansas-Pine Bluff (4-1, 4-0 SWAC) on Saturday, May 1.

Senior quarterback Aqeel Glass (St. Louis, Mo.) led the A&M attack as he went 24-of-45 for 271 yards and three touchdowns against just one interception.

Senior wide receiver Zabrian Moore was on the receiving end of five of those completions for 111 yards and a pair of scores while sophomore wideout Abdul-Fatai Ibrahim had six grabs for 61 yards. Making the most of his one catch, redshirt-junior tight end Anthony Howard snagged the other touchdown on the day from seven yards out.

Alabama A&M junior running back Gary Quarles contributed 87 yards on 23 carries. Two of those totes saw him end up in the endzone.

As impressive as the offense was, the defense made the case that they were even better. Three different individuals recorded double-digit tackles, a group led by senior linebacker Armoni Holloway (Pinson, Ala.) with 13, seven of which were solo.

He was joined by junior defensive lineman Marcus Cushnie with 12 tackles, seven solo, three for loss and a pair of sacks. Redshirt-senior linebacker Quantravis Kelly joined in with 10 tackles with eight of those as solos and one for loss and his team-high third interception of the season.

In a match up of undefeated, nationally ranked teams playing for a conference title, it was worth the price of admission as it was a back-and-forth affair right down to the closing seconds.

The Bulldogs took their opening drive down to the UAPB 12-yard line before seeing it stall and Corey coming on to knock through his 29-yarder for an early 3-0 lead at just a minute and a half in. The Golden Lions would then come away with strong field position with a 35-yard return from Josh Wilkes that put it at the A&M 46-yard line.

From there Skyler Perry would connect on a 15-yarder to DeJuan Miller and a 17-yarder to Wilkes as part of a seven-play, 46-yard drive that culminated with a four-yard rushing touchdown from Mattias Clark to put Arkansas-Pine Bluff up 7-3 at the 10:24 mark.

Back-and-forth in the title fight would be the order of the day as Glass led the Bulldogs on an eight-play, 75-yard drive that saw him hit Moore for a 30-yard touchdown strike to flip the script and retake the lead, this time 10-7 with not even half of the opening frame gone by.

The league's top return man would then weigh in as Tyrin Ralph took the ensuing kickoff back 81-yards to put UAPB back on top, 14-10, at the 7:26 mark. In a turn from what the first half of the opening quarter held, each of the next two drives for both teams would not result in a score but it would be the Golden Lions who would fall victim to sudden change as a Perry pass ended up in the arms of Kelly on the first play of the second quarter.

Alabama A&M would see that drive stall at their own 33-yard line following an unsportsmanlike penalty but would turn right around and benefit from a roughing the kicker penalty – on a fourth-and-33 no less – that kept the drive alive at the A&M 48-yard line. From there it would be Quarles that would pay it off with 31 yards rushing on the drive, including a three-yard touchdown scamper. A blocked extra point by Keyvien Johnson then kept it at a 16-14 Bulldog advantage with 11:07 left in the half.

After taking a six-yard sack on the opening play of their next drive, Perry orchestrated a nine play, 71-yard effort that featured a 31-yard completion to Harry Ballard III and capped off with a five-yard touchdown connection from Taylor Holston to Miller for a 20-16 lead at the 7:04 mark.

Skyler Perry is intercepted by Trent McGhee in the endzone.

But it would be only six points and a four-point swing overall as A&M blocked the extra point and Green proceeded to scoop it up and go 98 yards the other way for a defensive two-point conversion, instantly cutting the lead in half at 20-18.

In a potential momentum swing, on the third play of the Bulldogs' next series Glass was strip sacked by Chris Newton and Kolby Watts did his own scoop-and-score, this for a touchdown from 33-yards out that put UAPB up 26-18 with 5:17 showing on the clock following a failed two-point conversion. That would then be the margin the teams would take to the half.

Alabama A&M then allowed just four plays to the Golden Lions on their drive to open the second half before going 12 plays and 79 yards themselves with Glass capping it off with the seven-yard strike to Howard. With the extra point, that cut the deficit to 26-25 with eight minutes left in the third.

The defense came up big once again as they held Arkansas-Pine Bluff to six plays and 18 yards on their next drive and the offense capitalized once again, this time going 80-yards in eight plays. Glass would hit redshirt-junior tight end Kendric Johnson (New Market, Ala.) on a 35-yard completion as a key play in a drive that would see Quarles hit the endzone from three yards out again, giving A&M back the lead 32-26 with 1:24 on the clock.

It would take until the middle of the fourth for the scoreboard to change again but when it did it would be in the Bulldogs favor. With their drive starting with just under 10 minutes left, Quarles got things going with an 18-yard scamper and Glass would deliver a key 15-yard rush on third-and-10 from UAPB's 28-yard line to keep the drive alive. On the very next play he dropped a ball into the waiting arms of Moore from 13 yards out to stretch to a commanding 40-26 lead following a two-point conversion.

Faced with little time and a small chance of success, the Golden Lions would not give up, however, as they punted on their ensuing drive and kept A&M from adding to their lead on their next possession. Getting the ball back with 5:11 on the clock, Perry engineered an 11-play, 72-yard drive that saw Wilkes snag an 11-yard touchdown to cut it to 40-33 with 2:30 to play.

UAPB would manage to get the ball back with 37 seconds left, starting that drive in Alabama A&M territory at the 34-yard line. A 12-yard rush by Perry would get it down to the 22-yard line but three straight incompletions left the Golden Lions staring at fourth-and-endzone. The down and distance wouldn't matter as Perry rifled one to the endzone – only to see it land in the waiting arms of McGhee with six seconds left.

Following one last heave to run out the clock, the Bulldogs could say something only one other team in the history of the program could – that they were Champions of the Southwestern Athletic Conference.

Perry converted on 23-of-36 attempts for 231 yards and one touchdown while throwing three picks to lead UAPB while Taylor Holston came in for one play, connecting on a five-yard touchdown strike.

On the ground, Perry rushed 16 times for 71 yards with a long of 12 and Clark picked up just five yards but found the endzone in the process. Things looked better through the air as Miller caught six balls for 69 yards and a touchdown and Wilkes had six grabs for 48 yards and a score. Ballard added five catches for 60 yards.

Defensively, Isaac Peppers recorded a pair of sacks, six tackles and 2.5 tackles for loss while Watts had a 33-yard fumble recovery for touchdown and seven tackles. Newton and Athen Smith each had a full sack while Zion Farmer and Timon Akins shared one. The latter added eight tackles on the day and Jalon Thigpen came away with an interception.