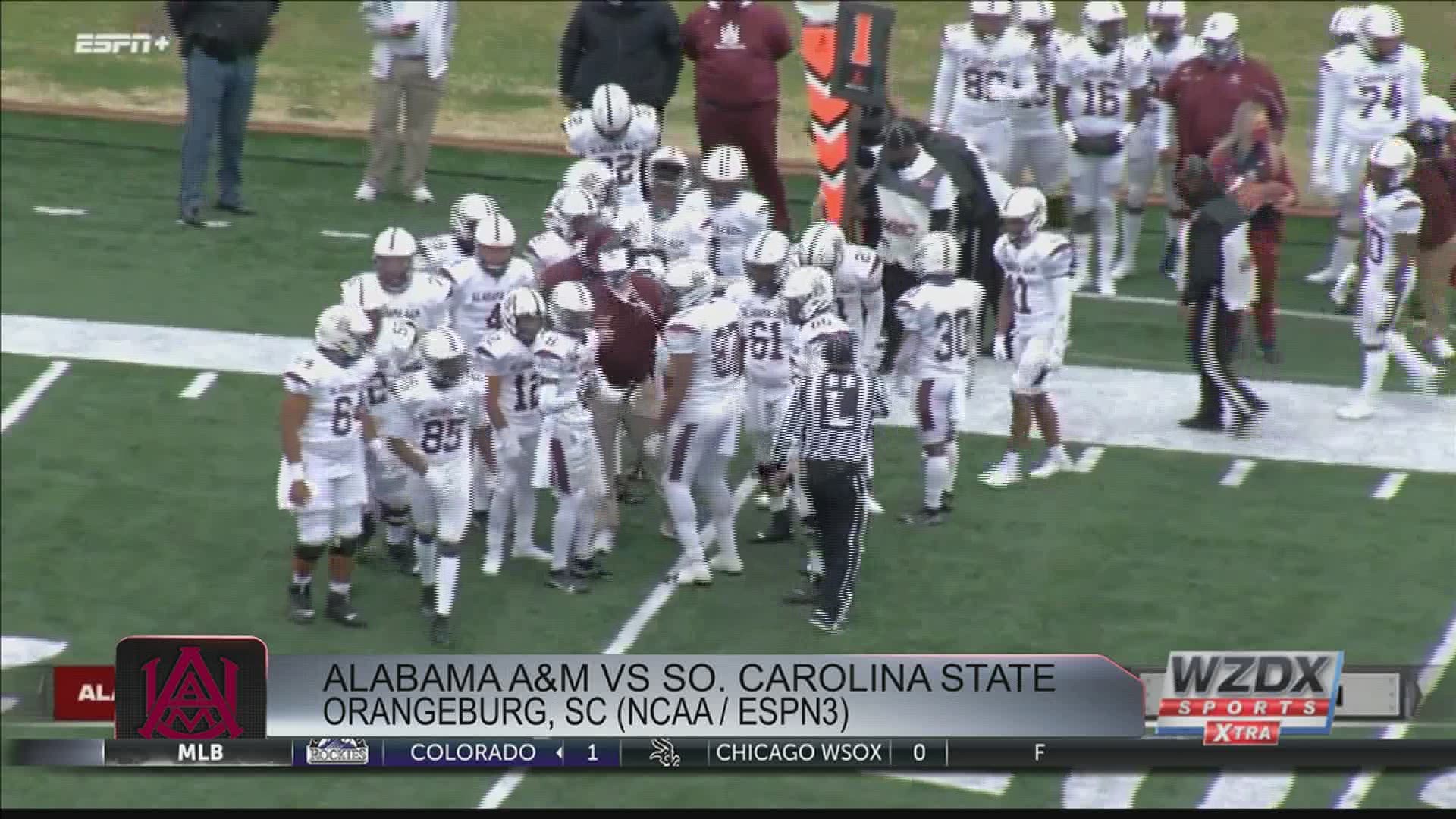 ORANGEBURG, S.C. — In a matchup of teams that both waited 468 days to return to the field, Alabama A&M returned to form quicker as they recovered from a slow start to dominate South Carolina State over the final three quarters and come away with an impressive 31-7 victory in an NCAA Division I football game on Saturday, March 6.

Junior wide receiver Brian Jenkins, Jr. (Daytona Beach, Fla.) caught the other touchdown and junior running back Gary Quarles (Cottondale, Ala.) rushed 21 times for 92-yards to go with a 38-yard reception to round out the top offensive performers.

Defensively, junior defensive end Marcus Cushnie (Broward County, Fla.) had a pair of sacks and redshirt-senior linebacker Quantravis Kelly (Montgomery, Ala.) racked up a pair of interceptions, a sack and a pass breakup. Senior linebacker Armoni Holloway (Pinson, Ala.) finished with 10 tackles, eight solo and two for loss.

Neither team would come out sharp offensively in the first quarter as they alternated punts over the first five possessions, none of them lasting longer than five plays. A&M would see their third drive end on the first of three first half interceptions by SCSU's Decobie Durant with 1:13 left in what would be a scoreless opening frame.

It wouldn't end up much better for South Carolina State on their ensuing possession as the Bulldogs' Kelly stepped in front of a third down pass from Corey Fields to get the ball right back with just 11 seconds gone by in the second quarter. Following four more fruitless possessions, including another pick by Durant, Alabama A&M got their offense underway.

After an inauspicious beginning where they found themselves in third-and-9, Glass dumped off a pass to Quarles that he turned into a 38-yard gain down to the 16-yard line. On the next play the 6-5 signal caller hit Ibrahim in the endzone for a touchdown and eventual 7-0 lead with 9:08 left in the quarter.

A&M would force a fumble on the next series to get the ball back only to see Durant pick off his third ball – but it would be the last they would hear of him on the day. With just over two minutes left in the half, Glass found sophomore wideout Cameron Young (Daphne, Ala.) for a 30-yard pick up and six plays later was down to S.C. State's 18-yard line.

From there he dropped one over the shoulder of Hilarie in the back right corner of the endzone for another touchdown and what would be a 14-0 lead at the half.

The Bulldogs would not rest on their laurels at the start of the second half as it took them just three plays to go 75-yards, with 65 of that coming on a catch-and-run from Hilarie that made it 21-0 at the 13:22 mark. After two failed drives by SCSU, including one that ended in a forced fumble, A&M was back at it.

This time it would be a seven play, 57-yard drive capped by a 20-yard pass to Jenkins in the right corner of the endzone with 4:43 left in the frame, extending the lead to a commanding 28-0. Out of sorts on offense all game, South Carolina State would put together a nine-play, 80-yard drive that spanned the end of the third and the first 1:24 of the fourth and wrapped up with Alex James scampering 23-yards to paydirt to cut it to 28-7.

A case of too little, too late, the Bulldogs would add a 37-yard field goal from redshirt-junior kicker Spencer Corey (New Palestine, Ind.) to extend to a 31-7 margin with 7:52 remaining. SCSU would come up with a 12-play, 60-yard effort on their next possession, consuming nearly five and a half minutes in the process, but would see it fall by the wayside as their fourth down play came up short with 2:21 to play. From there, A&M ran three plays to run out the clock on a convincing 24-point season opening victory.

Fields would go 10-of-22 with a pair of picks and take three sacks under center for South Carolina State and Kendrall Flowers rushed 13 times for 115 yards. James found the endzone and Shaquan Davis was the Bulldogs leading receiver with a pair of catches for 51 yards and Tyrece Nick caught three balls for 19 yards.

On defense, Durant notched three interceptions but nothing else while Nathanie Wilcox and Sha Haltiwanger each had a sack. Chad Gilchrist and BJ Davis each had 10 tackles with the former adding 1½ for a loss.