The Rogers & Mae Jemison girls along with the Lee boys all tried to win a state basketball championship and bring back a blue map to north Alabama. 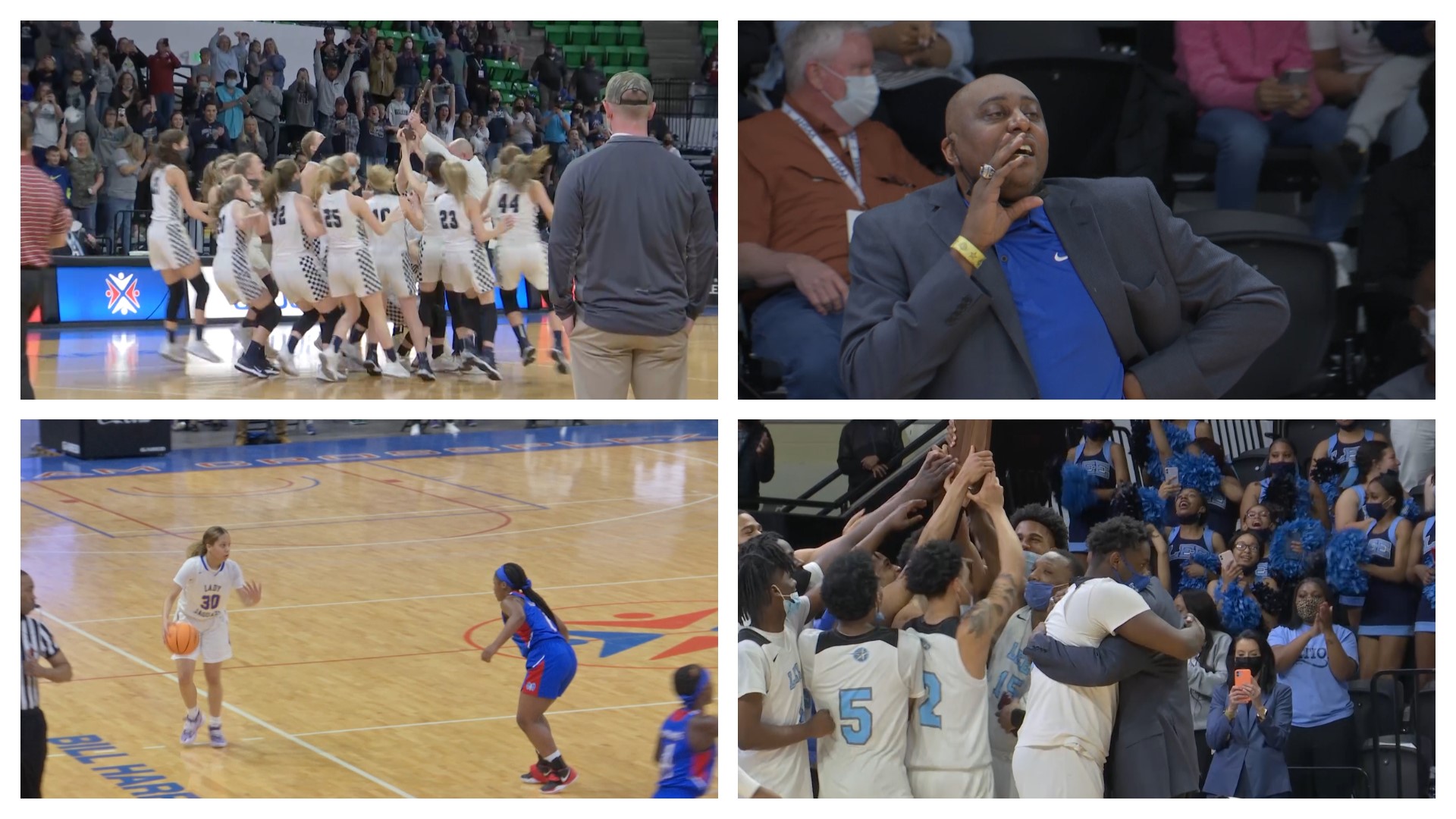 Rogers High School’s Lady Pirates found their offense at the perfect time.
Roges and Anniston struggled offensively in Thursday’s AHSAA Class 4A Girls’ State Championship game at Bill Harris Arena at the Birmingham CrossPlex, but Rogers (28-8) used a 7-0 fourth-quarter spurt to pull away for a 48-39 victory over Anniston.

“This is a special season,” Rogers coach Blake Prestage said.
The title was Rogers’ second state championship in the last three years. The Pirates also beat the Bulldogs – by an almost identical score of 46-38 – in the 4A title game in 2019.

Anniston senior and reigning Class 4A Player of the Year Allasha Dudley scored eight straight points early in the fourth quarter – a 3-pointer, a hanging jumper in the lane and 25-foot 3-pointer – to tie the game at 31-all. Moments later, Asia Barclay’s bucket tied it at 33-all.
That’s when Rogers, coached by Blake Prestage, briefly found its offensive rhythm.

The Pirates scored on three straight possessions, including a 3-pointer by Erin Brown to give the Pirates the lead for good at 36-33. Madie Krieger added a bucket, and Brooke Jones’ layup made it 40-33. Anniston never recovered.

Carver High School of Birmingham won its first AHSAA state basketball championship Thursday winning a classic battle over Mae Jemison 78-69 as the 2021 AHSAA State Basketball Championships continued its championship round at Bill Harris Arena at the CrossPlex with the Class 5A girls’ finals.

The girls’ clash was highlighted by two incredible individual efforts by Carver senior guard Randrea Wright and Mae Jemison senior guard/forward Saniah Parker. Each player finished with 35 points.
Wright was 20-of-24 at the foul line, many of the free throws coming in a pressure-packed second half. She also handed out seven assists, had three steals and five rebounds. Parker also went to the foul line often, sinking 11-of-15 free throws. She also had 13 rebounds, five blocked shots and three steals before fouling out in the final moments.

The Rams (25-4), coached by Jarvis Wilson, were 31-of-43 at the foul line and made 9-of-24 3-point shots attempted. The Jaguars (22-9), coached by Sherell Hobbs-Robertson, out-rebounded Carver 59-42 and was 17-of-24 at the foul line but made just 2-of-37 shots taken beyond the 3-point line.
Destinee Nelson chipped in 19 points with 4 treys for the Rams. Ciondra Darden had 13 points and 11 rebounds and Tamia Muse had nine points. Kesia Rogers had 12 points and five rebounds and Mae Davis had five points and 10 rebounds. The trip to the finals was the first in school history for both teams.

Lee-Huntsville’s smothering defense reached an even higher level of perfection Thursday night in the 99th AHSAA State Basketball Championships Class 5A finals. The Generals downed Ramsay 47-29 to claim the school’s first state title since 2010.
Lee shut down the Rams’ offense, limiting Ramsay to just 12 points in the second half. In the process, Ramsay shot just 27.5% from the field, lost the rebounding battle 31-29 and made only 1-of-10 tries from the 3-point line.