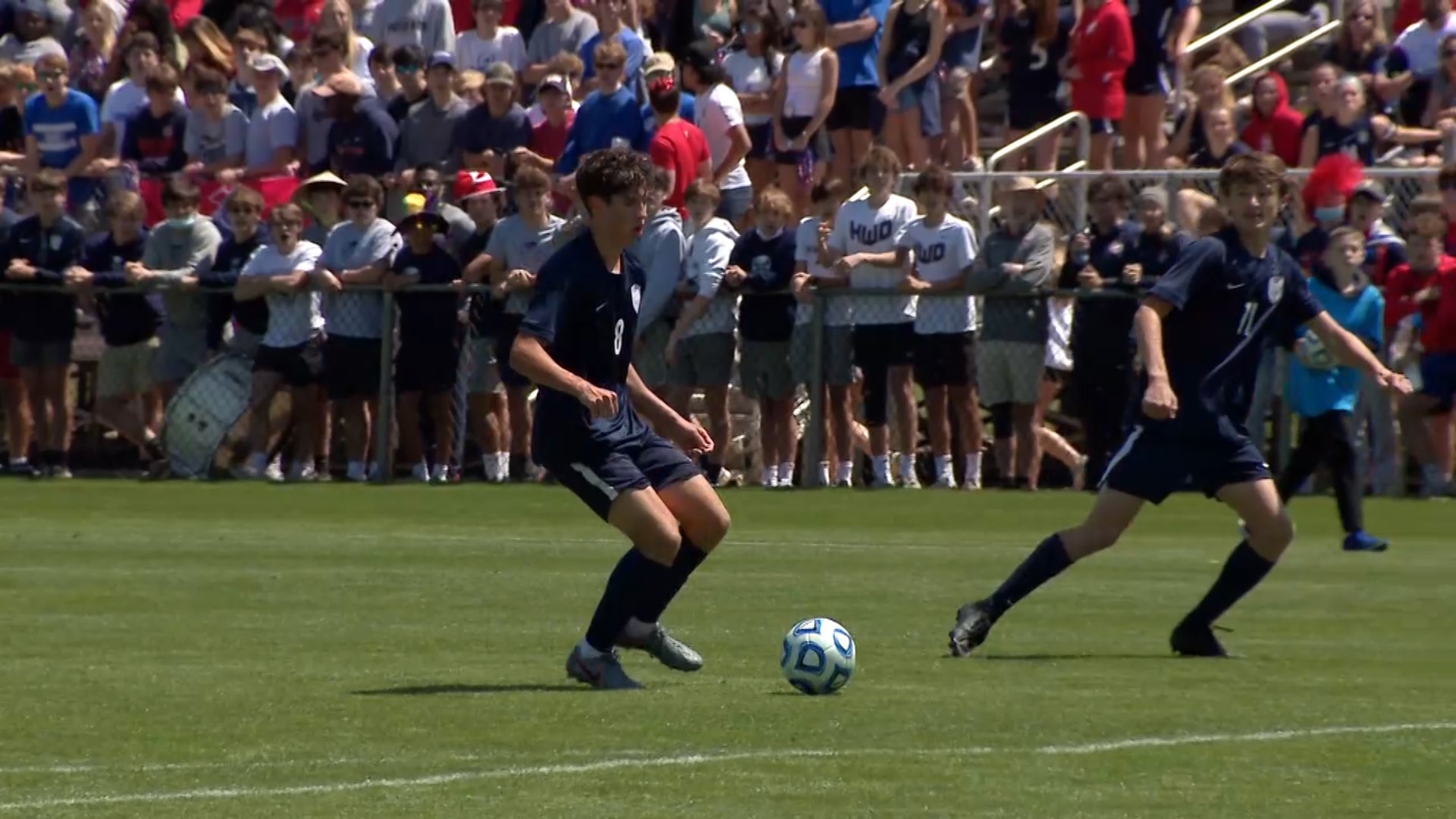 He need just 65 seconds to net the first goal at Huntsville’s John Hunt Park Friday and the Patriots’ defense did the rest as Homewood (17-3-3) downed Fort Payne 3-0 to claim a berth in the Class 6A championship game Saturday.
The early goal was especially notable because the Wildcats ((17-3-3) had allowed just one goal in three playoff wins en route to the semifinals.

The Patriots advance to Saturday’s championship game against McGill-Toolen Catholic (20-5-4), which earned a 3-1 victory over Pelham in the other semifinal. Homewood will play for its sixth boys state soccer title and third since 2014. The Patriots captured titles in 2003, 2005, 2006, 2014 and 2018.

Sophomore Hayes Jenkins and tournament MVP senior Leighton Robertson scored two goals apiece or Coach Joe White’s team. The victory secured the Eagles’ eighth state championship since 2011, including two straight in 4A/5A since moving up a class from Class 1A/3A.
The Eagles captured 1A-4A titles in 2011, 2012 and 2014, took home 1A-3A titles in 2015, 2017 and 2018 and their first 4A-5A title in 2019. The 2020 AHSAA soccer championships were cancelled because of the COVID-19 pandemic, which means Montgomery Academy has won eight titles in the last 10 state tournaments.

In Friday’s finale, Jenkins scored in the game’s opening minute for the Eagles, and Robertson added a first-half goal. St. John Paul II’s Jaclyn Laue scored the Falcons’ only goal less than two minutes into the second half, and Jenkins answered less than five minutes later to give Montgomery Academy a 3-1 lead.

Montgomery Academy’s Virginia Meacham scored with 25:48 to play, Robertson scored her second goal of the finals and fifth of the State Tourney with 22:14 remaining, and Sophia Cho scored the game’s final goal. St. John Paul II was trying to win its first girls’ state soccer championship.

Junior Jackson Delaney took a feed from Evan Duckworth and drilled it into the net at just 4:32 into the match and state tourney MVP Luke Ferguson, an eighth grader, added a second goal seven minutes later as Bayside (21-1-1) beat Mars Hill Bible 3-0. Senior Lochlan Stacey got the final goal later in the first half to close out the scoring.

The Panthers (20-2-0) got a big Academy’s Lady Eagles have definitely built a soccer dynasty. Goalkeeper Lan Whiteside had five saves to pace Mars Hill.
The state title was the third for Bayside since 2016 and the second in a row after winning the 2019 title. Last year’s championships were not played since the season was cut short by the COVID 19 pandemic.

Indian Springs 2, Russellville 0
Russellville High School had no answer for Indian Springs’ 6-foot-7 junior Jackson Nabors. He scored twice during an eight-minute stretch in the first half – the first on a header from a perfectly placed pass from teammate Nick Johnson – to lift Indian Springs (24-2-1) to a 2-0 victory over Russellville to claim Class 4A-5A boys championship Friday night at John Hunt Park.

Russellville (19-1-0), led by Coach Trey Stanford, suffered its first loss of the season and fell one win shy of capturing the school’s first state boys soccer championship. In the second half, Indian Springs played conservatively, and the Golden Tigers had several promising scoring opportunities but couldn’t find the back of the net. Nabors was named the tournament MVP. He had two assists in Friday’s 2-0 semifinal victory over Montgomery Academy before scoring both Indian Springs goals in the final.

Indian Springs now has four AHSAA boys’ state soccer titles, but this is the first in 4A-5A. The previous three titles, in 2008, 2014 and 2017, were in the state’s smallest classification. Indian Springs won its five 2021 playoff games by a combined score of 19-2.