There are a lot of questions surrounding today’s date and the significance of "Juneteenth." 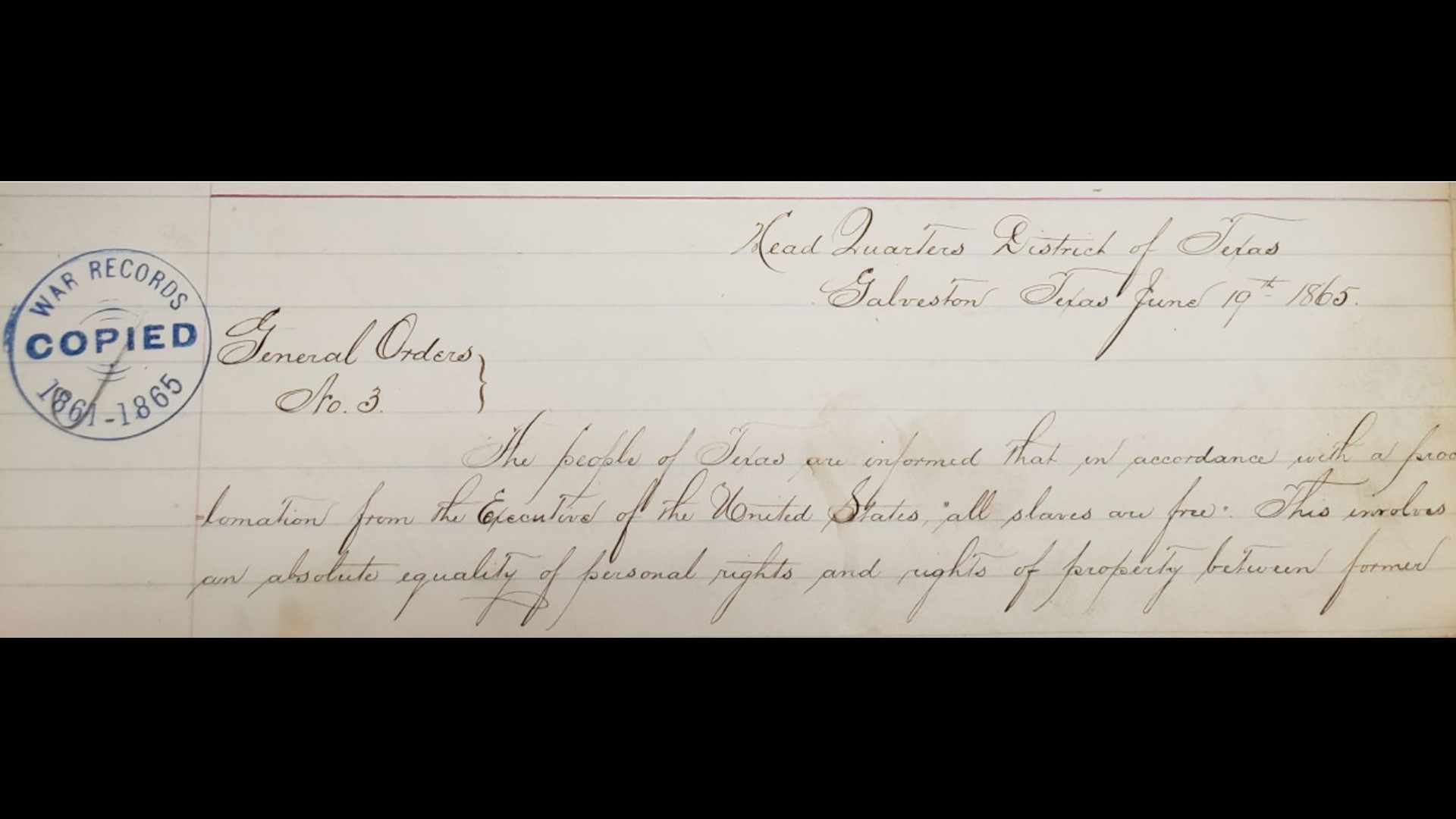 Is the original "Juneteenth" military order located in Washington, D.C.?

The National Archives and Records Administration

The National Archives and Records Administration  is the nation’s record keeper of all document and materials created in the course of business of the US federal government.

And it says, yes, it believes it has the original handwritten “Juneteenth” document at its headquarters in Washington.

The order was issued by Union Major General Gordon Granger and it tells two hundred thousand slaves in Texas that they are free.

The National Archives safeguards many of the nation's most important records related to African American history and civil rights, and General Order Number 3 is one of those records,” said Archivist of the United States David S. Ferriero.

He said, "We know from history that certain events took place, and it's always a delight when we can help make history come alive by sharing the actual documentation of those events.”

“A lot of people may not realize we have the original document in our holdings,” said Trevor K. Plante, Director of Archival Operations at the National Archives Building in Washington, DC.

Credit: Popperfoto via Getty Images
A vintage trade card featuring the Battle of Chickamauga in Georgia during the American Civil War on 29th September 1863. Major General George Thomas of the Union Army placed his and his men's backs and those of his comrade, Major General Gordon Granger, against a rockface and refused to be driven from the field; this, the hardest-fought and bloodiest in the rebellion, still resulted in a Confederate victory. (Photo by Popperfoto via Getty Images/Getty Images)

He said, “One of our public affairs specialists reached out to me to see if we had General Order 3. I searched for the document in our holdings in support of this story. I think this is an important record for American history, and more importantly, African American history.”

The printed version is part of the War of the Rebellion: A Compilation of the Official Records of the Union and Confederate Armies volumes published in the 1880s and 1890s.

The document will be officially digitized and added to the National Archives Catalog, as well as highlighted on NARA’s African American History page.

“This is a perfect time to showcase General Order No. 3 because it’s one way of educating everyone on African American culture, and I believe it supports the National Archives’ overall goal to create and sustain an inclusive, empowering workplace culture that connects employees to the agency’s mission of making access happen,” said Erica Pearson, Director of the Office of Equal Employment Opportunity  program at the National Archives.

RELATED: VERIFY: No, the White House address has not changed to 1600 Black Lives Matter Plaza

Juneteenth has been formally celebrated primarily by people in African American communities in Texas since 1866 and later celebrated in other states. Nearly all U.S. states  and the District of Columbia currently recognize Juneteenth as an official state holiday or observance. It is the oldest known celebration commemorating the end of slavery in the United States.

RELATED: VERIFY: Yes, at least 150 local and federal officers were injured during the first week of protests in DC