VERIFY: Your absentee ballot won't be automatically rejected if you tape it shut instead of licking it

Posts online claim that if you tape your ballot shut instead of sealing by licking it, your ballot will be rejected. Local officials said that's not true. 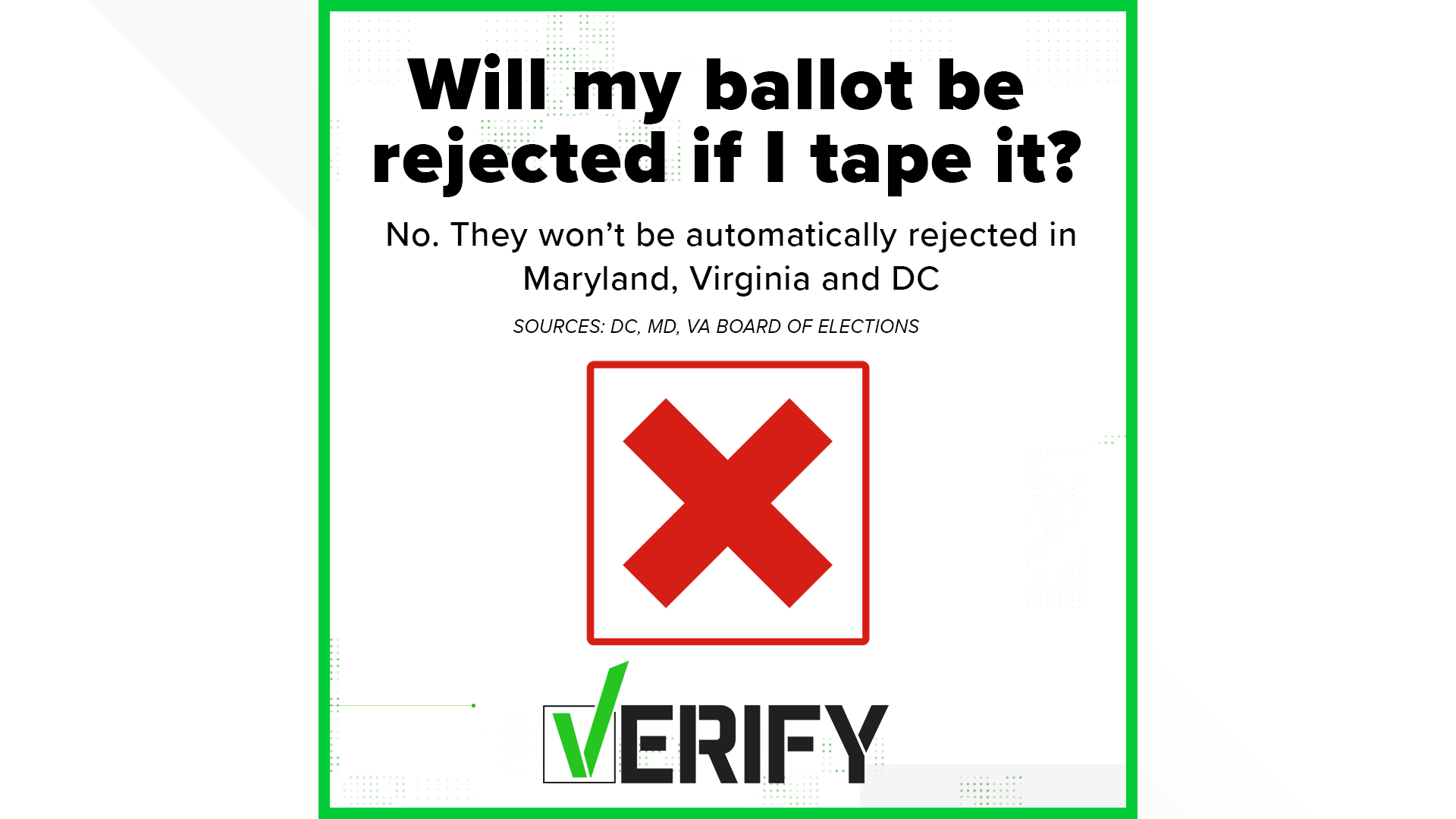 WASHINGTON — Millions of Americans are voting by mail for the first time in 2020.

Election discourse has been rife with misinformation, and the rules when it comes to absentee ballots are no exception. The Verify team exists to get the facts.

Will absentee ballots get rejected if you seal them with tape instead of licking?

No, the ballots won't be automatically rejected in D.C., Virginia and Maryland if they are taped shut instead of licked shut.

DC Board of Elections

Maryland State Board of Elections

A Verify viewer sent us a tweet that claims: "Absentee ballots get rejected if you seal them with tape instead of licking the flap."

So we sent our researchers out to see if this is true in the D.C. Metro region.

Spokespeople for both the Maryland Board of Elections and the Virginia Department of Elections outright said that this is false.

A D.C. Board of Elections official said the city will accept taped ballots, but offered the information that a taped ballot envelope will not process through their sorter, and requires more time to be manually processed.

RELATED: VERIFY: In DC, Maryland, Virginia your mail-in ballot signature does not have to match your DMV signature

Our team then reached out to Tammy Patrick, a senior advisor at the non-partisan, voter advocacy foundation Democracy Fund. They monitor voting issues and voters' rights all over the United States.

"I am not aware of any state specifically using that as a cause for rejection," Patrick told us in an email. "Some do have 'evidence of tampering' as a flag for further review, so if it looked like the envelope was torn open and then taped up, it MAY qualify in some states as a cause."

That's likely where some confusion comes in. In some states, election officials may need to review taped ballots to make sure they haven't actually been tampered with.

But Patrick said in the age of coronavirus, they may take different things into account.

"In a global pandemic where a virus is transmitted through saliva, one would consider that in the determination," Patrick said.

So we can Verify that in D.C., Maryland and Virginia, your absentee ballot will not be rejected based solely on if it's taped or not.

RELATED: VERIFY: Yes, ballots are being accepted after Election Day in many states, but they still must be postmarked by November 3