No, President Biden can’t fire the US postmaster general

Federal law says only the Postal Service’s board of governors can appoint or remove the postmaster general. 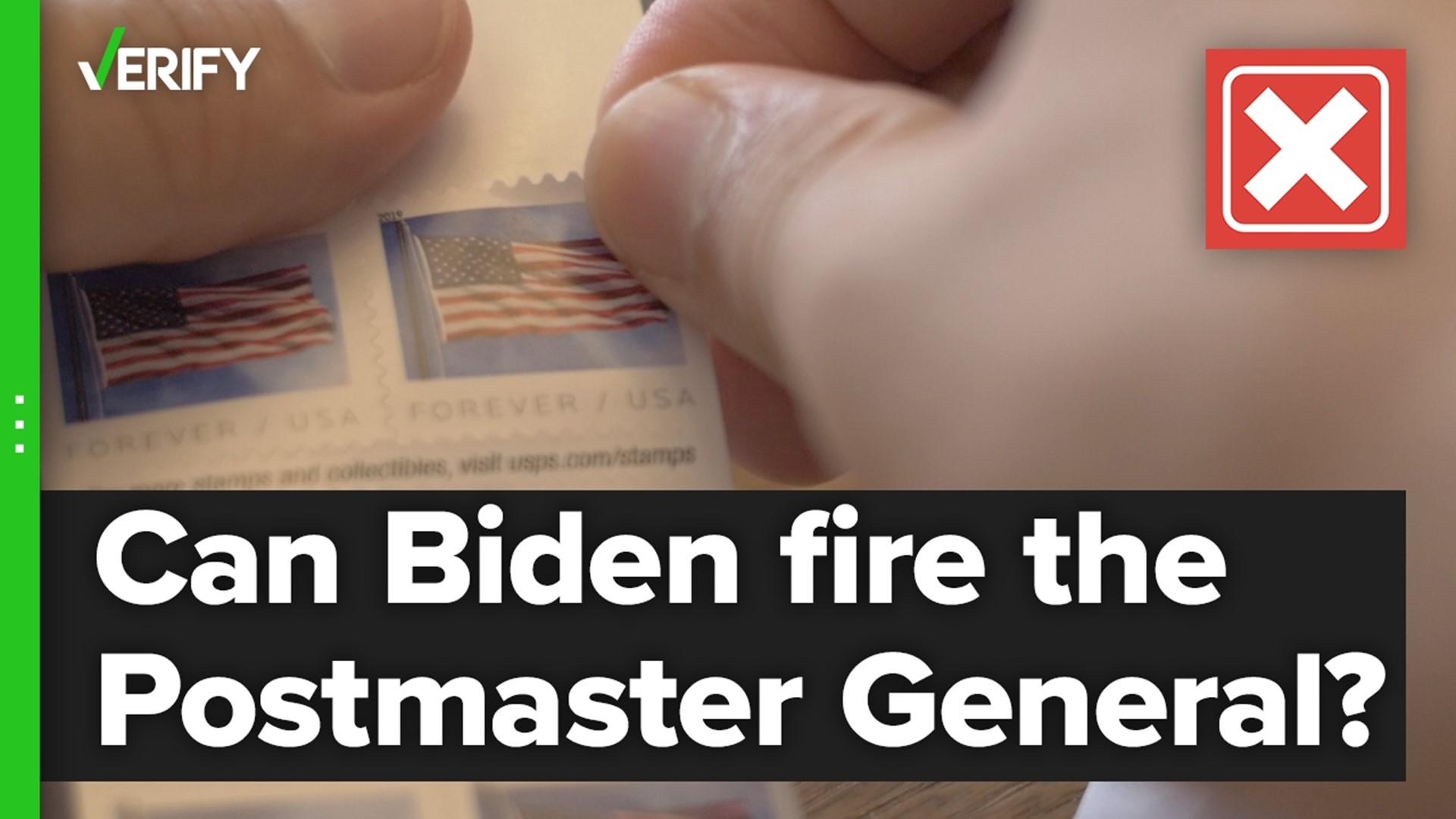 The U.S. Postal Service has enacted a series of changes over the last two months, including an increase in the price of stamps, a temporary price hike for mailing packages through Christmas and slower delivery for some first-class mail and periodicals.

The changes are part of Postmaster General Louis DeJoy’s 10-year plan aimed at achieving financial stability for the Postal Service, which the U.S. Government Accountability Office says has lost $87 billion over the past 14 fiscal years.

But DeJoy’s plan has not come without criticism. The attorneys general in more than a dozen states filed a complaint earlier this month over the postmaster general’s plan.

Can the president fire the U.S. postmaster general?

“The Board directs the exercise of the powers of the Postal Service, directs and controls its expenditures, reviews its practices, conducts long-range planning, approves officer compensation and sets policies on all postal matters,” the Postal Service says on its website. “The Board takes up matters such as service standards and capital investments.”

According to federal law, only the Postal Service’s board of governors can appoint or remove the postmaster general. Title 39 of the U.S. Code says, “The Governors shall appoint and shall have the power to remove the Postmaster General, who shall be a voting member of the Board.”

The president used to be able to appoint or remove the postmaster general, but that hasn’t been the case for decades.

In 1970, Congress passed the Postal Reorganization Act, which overhauled the postal system. The legislation abolished the Post Office Department, which was part of the Cabinet, and created the U.S. Postal Service that exists today – an independent agency of the executive branch.

The law also changed who was in charge of appointing the U.S. postmaster general.

That instability in leadership, an outdated organizational structure and increasing financial losses put the post office at a crisis point, the commission said. The commission recommended the postal system be restructured and operate more like one of the country’s largest businesses with a board of governors instead of as a government agency. The commission’s idea came to fruition with the passage of the Postal Reorganization Act.

No more than five governors on the board can adhere to the same political party. Originally, the governors’ terms were nine years, but legislation passed in 2006 reduced the term lengths to seven years. The governors’ terms are staggered, meaning they don’t all start and end at the same time. Governors appointed in the middle of a term serve the remainder of that term. Governors can serve a maximum of two terms.

Earlier this year, President Biden nominated Anton Hajjar, the former general counsel of the American Postal Workers Union, Ron Stroman, a former deputy postmaster general, and Amber McReynolds, who leads the nonprofit National Vote at Home Institute, to the governing board. The Senate approved all three nominees in May. This means five of the board’s nine members identify as Democrats or independent. It’s up to the board to decide if DeJoy will remain postmaster general.

More from VERIFY: Yes, it's true that the FDA hasn't had a permanent leader since January

The VERIFY team works to separate fact from fiction so that you can understand what is true and false. Please consider subscribing to our daily newsletter, text alerts and our YouTube channel. You can also follow us on Snapchat, Twitter, Instagram, Facebook and TikTok. Learn More » 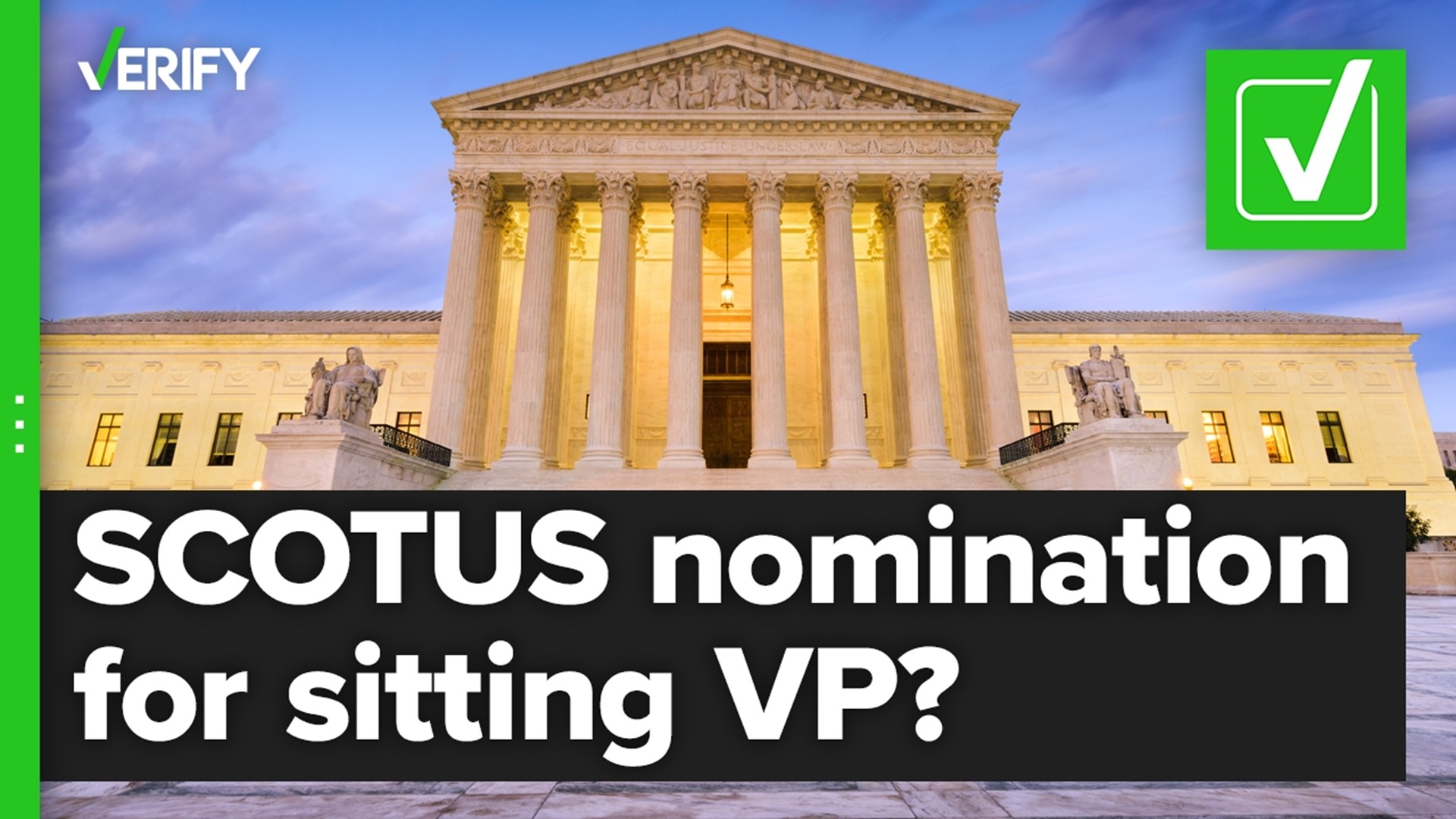 Fact-checking if it is possible for a sitting vice president to be nominated to the U.S. Supreme Court