VERIFY: No, Antifa did not start the wildfires in Oregon

Amid a wildfire emergency, 911 dispatchers in Douglas County are overrun with people claiming six members of Antifa set fires. 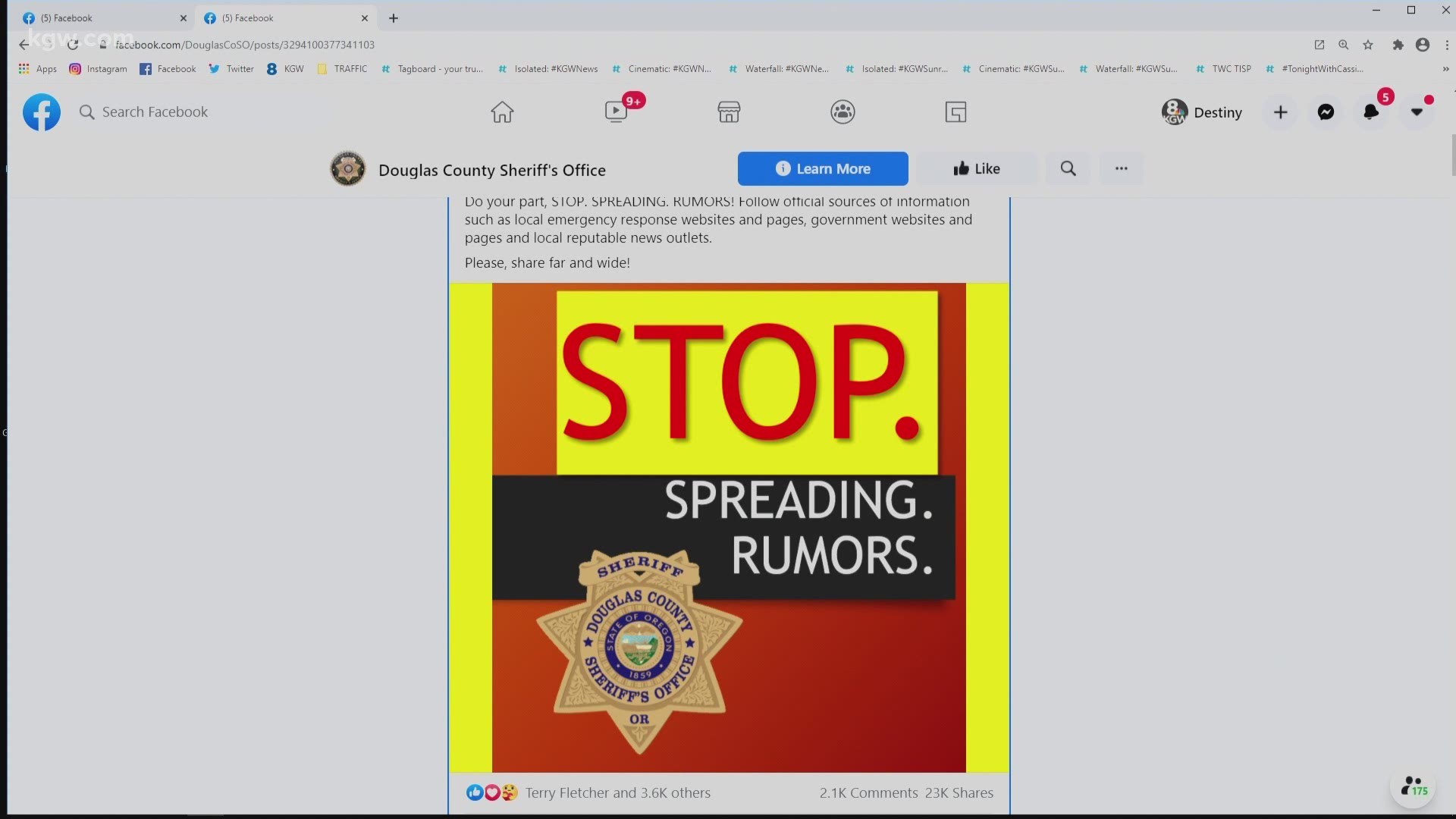 MEDFORD, Ore. — A rumor about six "members of Antifa" setting fires in southern Oregon has been debunked by multiple law enforcement agencies this week, but that hasn't stopped the fake news from spreading on social media and by word of mouth.

More than 900,000 acres are currently burning in Oregon, with tens of thousands of Oregonians evacuated from their homes this week.

It appears the rumor began with a doctored Facebook post from the Medford Police Department Wednesday, claiming arrests were made in connection with a string of fires.

The rumor appeared to have taken a life of its own in nearby Douglas County, where the sheriff's office reported the county's 911 dispatchers were "being overrun with requests for information and inquiries" on the unsubstantiated arson and arrests.

This is a made up graphic and story. We did not arrest this person for arson, nor anyone affiliated with Antifa or...

"THIS IS NOT TRUE! Unfortunately, people are spreading this rumor and it is causing problems," the sheriff's office wrote. "Do your part, STOP. SPREADING. RUMORS! Follow official sources of information such as local emergency response websites and pages, government websites and pages and local reputable news outlets."

While some of the wildfires burning across the state may have been intentionally set, including the Almeda fire in Ashland under investigation as arson, fire officials say the rumor that Antifa started this is not true.

On Friday, the FBI released a statement that extremists did not start the Oregon wildfires.

"FBI Portland and local law enforcement agencies have been receiving reports that extremists are responsible for setting wildfires in Oregon. With our state and local partners, the FBI has investigated several such reports and found them to be untrue," the FBI said in the statement. "Conspiracy theories and misinformation take valuable resources away local fire and police agencies working around the clock to bring these fires under control. Please help our entire community by only sharing validated information from official sources."

Multiple viewers have also contacted KGW -- online and in-person -- about these rumors. KGW News can Verify there is no truth to these rumors that Antifa planned and started these wildfires.

Do you have something you want us to Verify? Let us know. Email us at Verify@kgw.com