The choice of Barrett, if confirmed by the Senate, would allow Trump to put a historic stamp on the high court just weeks before the election. 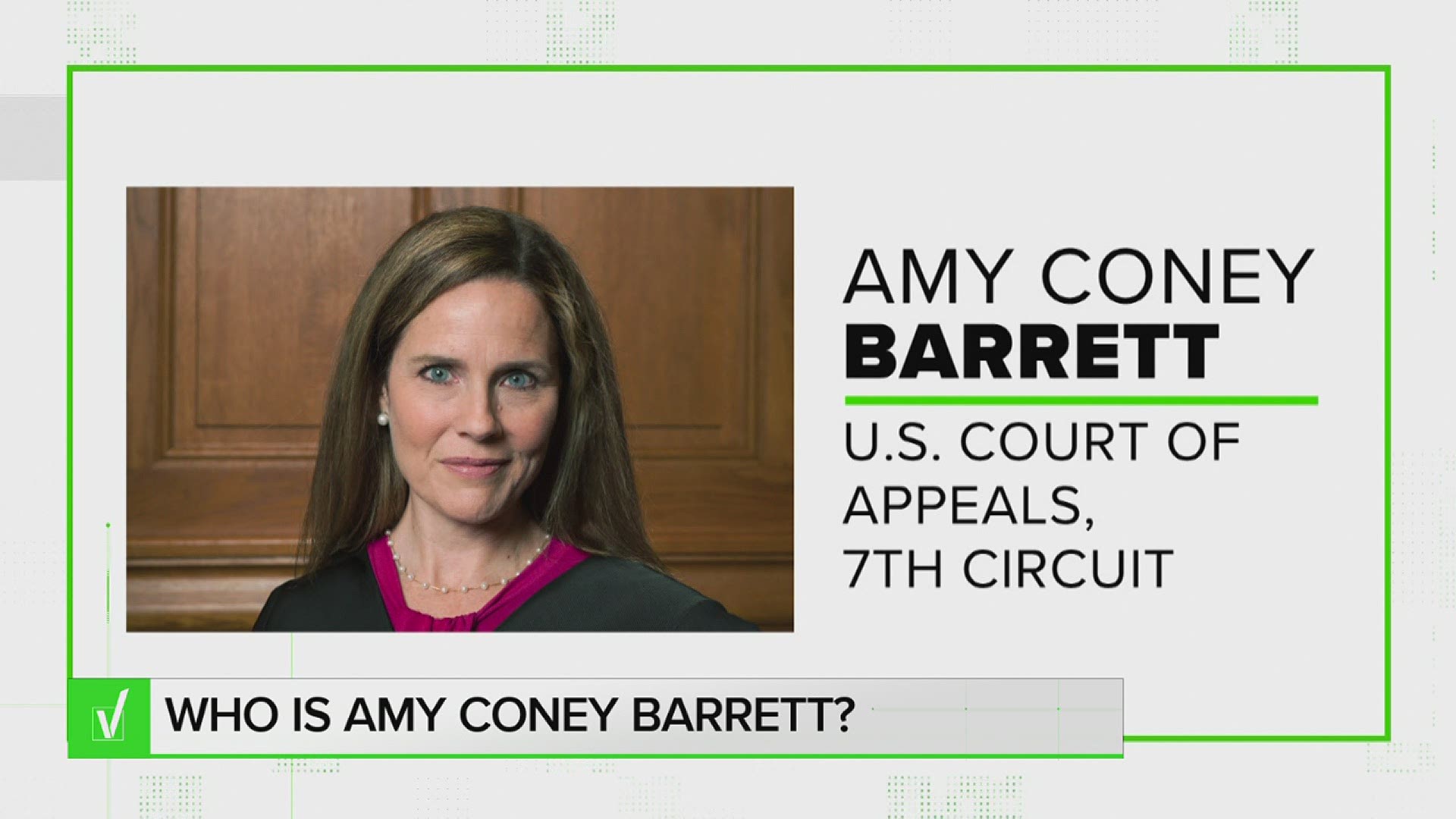 WASHINGTON — The White House has indicated to congressional Republicans that President Donald Trump will nominate Amy Coney Barrett to the Supreme Court on Saturday. Trump, aiming to keep up some suspense, told reporters Friday evening that he had made a decision but did not reveal his pick.

The choice of Barrett, if confirmed by the Senate, would allow Trump to put a historic stamp on the high court just weeks before the election.

Trump said his choice was “very exciting,” without giving away the name, but Republican allies said it would be Barrett. “Well I haven’t said it was her, but she’s outstanding,” Trump said of the Indiana federal judge.

Conservative groups and congressional allies are laying the groundwork for a swift confirmation process for her, even before Trump makes the selection official in a Rose Garden ceremony Saturday evening. They, like the president, are wasting little time moving to replace the late Justice Ruth Bader Ginsburg, organizing multimillion-dollar ad campaigns and marshalling supporters both to confirm the pick and to boost Trump to a second term.

The likely shift in the court’s makeup — from Ginsburg, a liberal icon, to an outspoken conservative — would be the sharpest ideological swing since Clarence Thomas replaced Justice Thurgood Marshall nearly three decades ago.

Ever the showman, Trump remained coy about his choice Friday evening as he returned from a campaign swing. When asked whether lawmakers were being told it was Barrett, Trump smiled on the tarmac at Joint Base Andrews and replied, “Is that what they’re telling you?”

“You’ll find out tomorrow,” he went on. “Look, they’re all great. It could be any of one them. It could be actually anyone on the list. They’re outstanding.”

For Trump, it will provide a much-needed political assist as he tries to fire up his base. For conservatives, it will mark a long-sought payoff for their at-times uncomfortable embrace of Trump. And for Democrats, it will be another moment of reckoning, with their party locked in a bitter battle to retake the White House and the Senate.

Senate Republicans are readying for confirmation hearings in two weeks, with a vote in the full chamber now expected before Election Day. Democrats are essentially powerless to block the votes.

“I’m confident he’s going to make an outstanding nomination,” Senate Majority Leader Mitch McConnell told Fox News. “The American people are going to take a look at this nominee and conclude, as we are likely to conclude, that she well deserves to be confirmed to the U.S. Supreme Court.”

“They’re hell-bent on getting this done as fast as possible,” said Democratic Senate whip Dick Durbin. “They think it helps Donald Trump get reelected.”

Outside conservative groups, who have been preparing for this moment for 40 years, are planning to spend more than $25 million to support Trump and his nominee. The Judicial Crisis Network has organized a coalition that includes American First Policies, the Susan B. Anthony List, the Club for Growth and the group Catholic Vote.

“One of the things we’ve learned from the histories of confirmation processes, the intensity of the fight has more to do with the previous occupant of the seat than who the nominee is,” said JCN’s Carrie Severino. “We expect this to be a very high stakes confirmation.”

Within hours of Ginsburg’s death, Trump made clear his intention to nominate a woman in her stead, after previously putting two men on the court and as he struggles to mitigate an erosion in support among suburban women.

The White House has already concluded a round of vetting this month, as Trump released an additional 20 names he would consider for the court. He has challenged Democrat Joe Biden to list possible nominees, too.

Trump had said he was considering five women for Ginsburg's seat, but Barrett was at the White House at least twice this week, including for a Monday meeting with Trump. He is not known to have met with any of the other contenders.

The staunch conservative’s 2017 appeals court confirmation on a party-line vote included allegations that Democrats were attacking her Catholic faith. Trump allies see that as a political windfall for them should Democrats attempt to do so once again. Catholic voters in Pennsylvania, in particular, are viewed as a pivotal demographic in the swing state that Democratic nominee Joe Biden, also Catholic, is trying to recapture.

Vice President Mike Pence defended Barrett when asked whether her affiliation with People of Praise, a charismatic Christian community, would complicate her ability to serve on the high court.

“I must tell you the intolerance expressed during her last confirmation about her Catholic faith I really think was a disservice to the process and a disappointment to millions of Americans,” he told ABC News.

Though the court can break down along ideological lines in high-profile cases, Chief Justice John Roberts and his colleagues resist the idea they are politicians in robes and emphasize that they agree more than they disagree. Still, Barrett’s appointment would make the court more conservative. It would be transformed from a court divided 5-4 between conservatives and liberals to one in which six members are conservatives appointed by Republican presidents. Barrett has been hailed as a justice in the mold of Antonin Scalia, for whom she clerked.

Trump played up the power to make judicial nominations with conservative voters in 2016, when Republican senators kept open the seat vacated by the death of Scalia rather than let President Barack Obama fill the opening. Trump's decision to release lists of accomplished conservative jurists for potential elevation was rewarded by increased enthusiasm among white evangelical voters, many of whom had been resistant to supporting the candidacy of the one-time New York Democrat.

Trump's campaign is preparing to use the latest confirmation fight for maximum political effect.

“This is big jet fuel on our base.” said Bill Schuette, a former Michigan attorney general and now a Trump campaign surrogate. "This is going to fire up our base in order to support the responsibility of the Senate and the president to make the nomination, the Senate to confirm.”

AP writers David Eggert in Lansing, Michigan and Jill Colvin in Washington contributed to this report.