Like much of the country, when the COVID-19 pandemic hit, NASA moved its operations to be remote, except for the astronauts, who trained separately for launch. 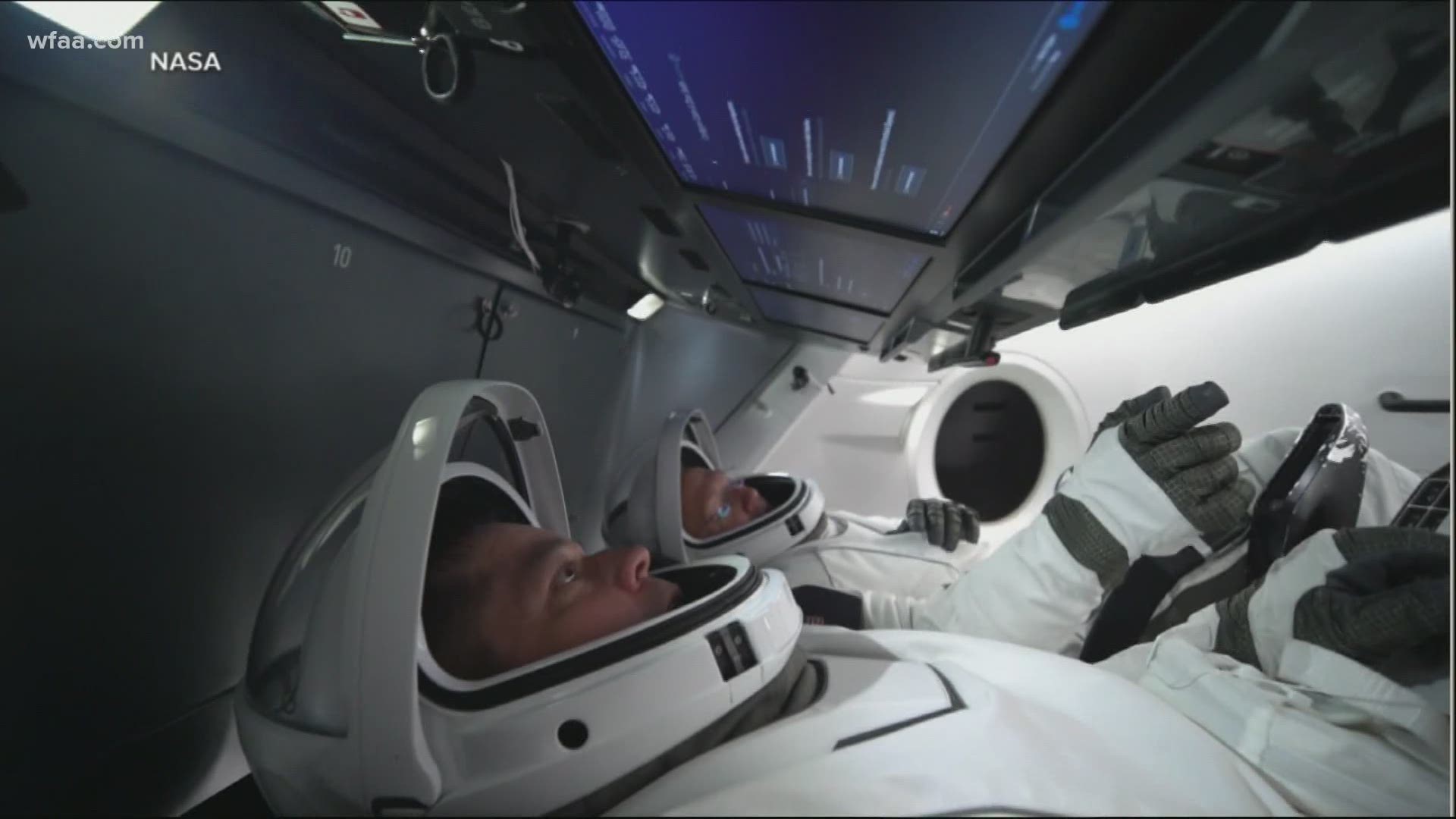 America is poised to return its collective eyes to the sky. For the first time in nearly a decade, American astronauts will launch into space from American soil while on board an American spacecraft. Their destination: the International Space Station.

Launch time is scheduled for 2:22 p.m. CT on Saturday. WFAA will stream coverage of the launch starting around 10 a.m. CT.

It has taken U.S. space travel nearly 10 years to reach this point.

But if the SpaceX Crew Dragon capsule launches successfully, that slow, long wait will melt into pure speed. After reaching 17,000 mph, it will take the two astronauts on board about 12 minutes to reach initial orbit and 24 hours to dock with the International Space Station.

“We know exploring the solar system can change the world. We saw that with Apollo. And we believe our destiny is for humans to explore the solar system,” said Johnson Space Center Director Mark Geyer on the most recent episode of Y’all-itics.

But even NASA can’t escape coronavirus. When much of the country began shutting down in March, NASA officials were worried it might delay the scheduled May 27 launch.

They discovered instead that much of their work could be done remotely. The big exceptions, of course, were the astronauts themselves, who still had to train for the mission. But NASA kept them separated and safe.

The mission is not without risk.

This is considered a test flight as part of NASA’s Commercial Crew Program. For the first time, astronauts will fly on SpaceX’s Crew Dragon spacecraft.

From the launch pad, to operational capabilities, there is a lot to learn on this mission. It will also be the first time the spacecraft systems will be tested in orbit.

“The safest thing to do is not go into space,” said Geyer. “It’s very important we’ve gotten through all of the testing and all of the anomalies we’ve seen and everybody’s comfortable that we’ve gotten the risk to a reasonable level.”

The specific duration of this mission has yet to be determined.

If everything goes according to plan, NASA says astronauts Robert Behnken and Douglas Hurley could stay two or three days on the space station, joining three others already on board, including American Chris Cassidy.

WFAA ORIGINAL: Six years after the shuttles retired, what’s next for NASA?

And if that’s the case, Behnken and Cassidy could take a walk in space, helping maintain the space station.

“Most of the time it’s to do maintenance, to swap out things that are broken, or to upgrade things. And in this case, we’re going to be upgrading the batteries on space station,” Geyer said.

Wondering how large the SpaceX capsule is? Arrange four dining room chairs and leave enough room for your feet. Then double the size around you and that’s the about the size of the capsule.

But once they’re in orbit, the crew will gain a little more space. That’s because in zero gravity, they can use the ceiling too. Eventually, four astronauts will make each trip and the ISS crews will rotate out every six months.

NASA’s next big goal is a return to the moon with a target date of 2024. So far, they have the rocket and they have the capsule to get there. The lunar lander is the last piece of the puzzle.

Even though this is the first launch from American soil since 2011, the U.S. hasn't left the space game entirely. We’ve had an American on the International Space Station for 20 years, continuously.

“So there have been Americans who were born that have never been alive when there wasn’t an American in space,” Geyer told the two Jasons.

If human exploration is inspiration, then an entirely new generation of children, will start looking to the sky and dreaming about a bigger future.