Cal Fire says one blaze was caused by a smoke-generating pyrotechnic device used during a gender-reveal party. 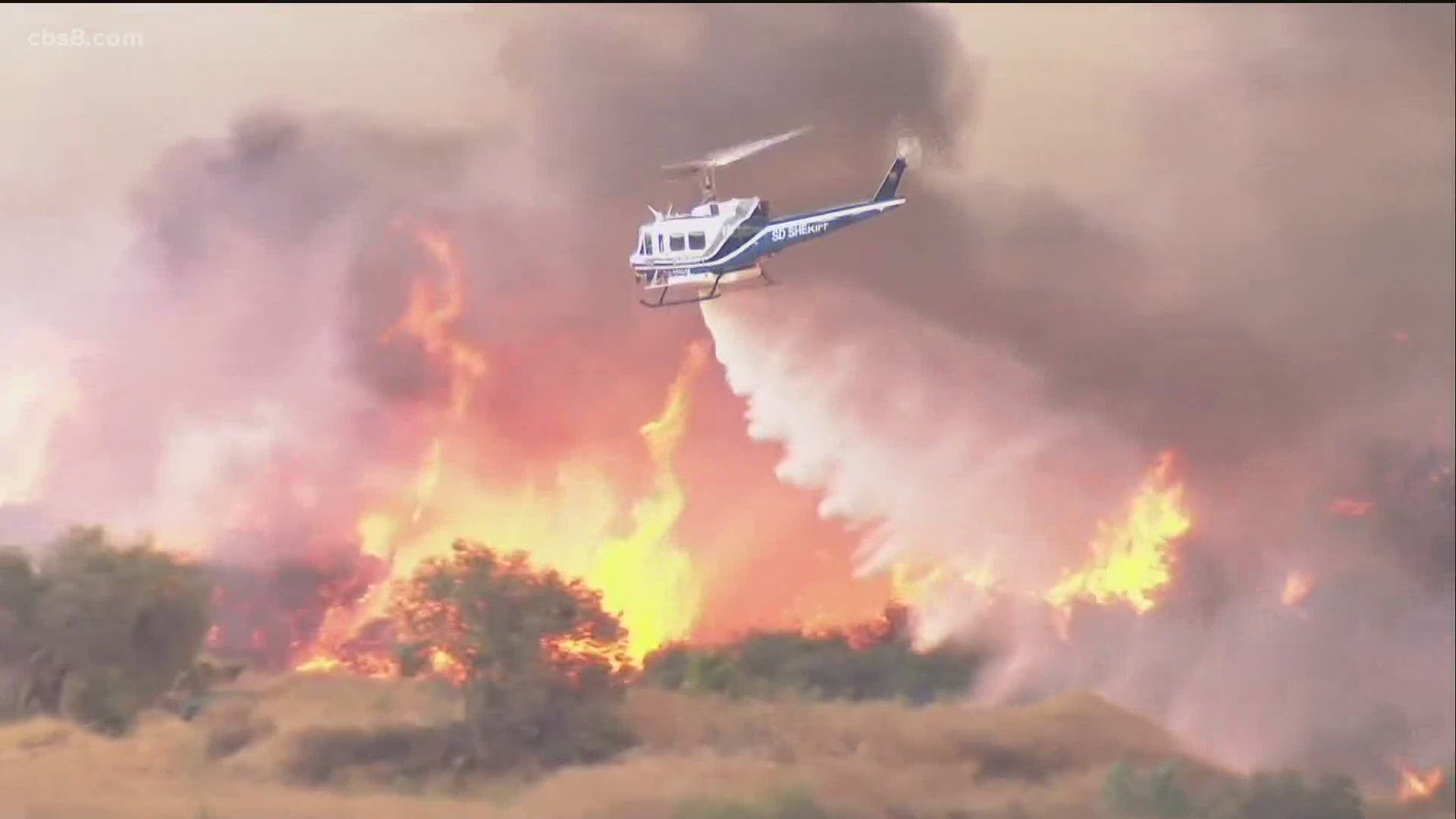 SHAVER LAKE, Calif. — Rescuers in military helicopters airlifted 207 people to safety over the weekend after an explosive wildfire trapped them in a popular camping area in California’s Sierra National Forest, one of dozens of fires burning amid record-breaking temperatures that strained the state's electrical grid and for a time threatened power outages for millions.

The California Office of Emergency Services said Black Hawk and Chinook helicopters were used for the rescues that began late Saturday and continued into Sunday morning at Mammoth Pool Reservoir. At least two people were severely injured and 10 more suffered moderate injuries. Two campers refused rescue and stayed behind, the Madera County Sheriff's Office said, and there was no immediate word on their fates.

A photo tweeted by the California National Guard showed more than 20 evacuees packed tightly inside one helicopter, some crouched on the floor clutching their belongings. In another photo taken on the ground from a helicopter cockpit, the densely wooded hills surrounding the aircraft were in flames.

The blaze dubbed the Creek Fire has charred more than 71 square miles (184 square kilometers) of timber, and the 800 firefighters on the scene had yet to get any containment after two days of work on steep terrain in sweltering heat. Some homes and businesses have burned, but there was no official tabulation yet.

Simply extraordinary, lifesaving work by the @CalGuard airlifting more than 200 people to safety overnight from the imminent danger of the #CreekFire The National Guard stands Always Ready, Always There to support our communities and nation in times of need. pic.twitter.com/MybDKESipJ

Other blazes broke out in Southern California and forced evacuations in San Diego and San Bernardino counties. The California Department of Forestry and Fire Protection, or Cal Fire, said the latter blaze, called the El Dorado Fire, started Saturday morning and was caused by a smoke-generating pyrotechnic device,used during a gender-reveal party.

RELATED: How to stay fire safe during Labor Day weekend

Credit: AP
An air tanker drops retardant at a wildfire burns at a hillside in Yucaipa, Calif., Saturday, Sept. 5, 2020. Three fast-spreading wildfires sent people fleeing and trapped campers in one campground as a brutal heat wave pushed temperatures above 100 degrees in many parts of California. (AP Photo/Ringo H.W. Chiu)

The Creek Fire churned southward from the reservoir through miles of dense forest and by Sunday afternoon threatened a marina and cabins along Shaver Lake, where Jack Machado helped friends remove propane tanks from the lodge Cottages at the Point. Sheriff’s deputies went through the town of several hundred residents to make sure people complied with evacuation orders.

“The lake is totally engulfed with smoke. You can’t hardly see in front of you,” Machado said. “The sky’s turning red. It looks like Mars out there.”

Temperatures in the fire zone were in the 90s, but that was cool compared to many parts of the state. Downtown Los Angeles reached 111 degrees (44 Celsius). and a record-shattering high of 121 degrees (49.4 Celsius) was recorded in the nearby Woodland Hills neighborhood of the San Fernando Valley.

It was the highest temperature ever recorded in Los Angeles County, according to the National Weather Service. The mark rivaled the high in California's Death Valley, typically the hottest place in the country.

Meanwhile, downtown San Francisco set a record for the day with a high of 100 (37.7 Celsius), smashing the previous mark by 5 degrees.

“By our calculations, over 99% of California’s population is under an Excessive Heat Warning or Heat Advisory today,” the weather service in Sacramento tweeted Sunday afternoon.

The exceptionally hot temperatures were driving the highest power use of the year, and transmission losses because of the wildfires have cut into supplies. Eric Schmitt of the California Independent System Operator that manages the state’s power grid said up to 3 million customers faced power outages if residents didn't curtail their electricity usage.

About 7 p.m., the California Independent System Operator declared an emergency and said power outages were imminent because a transmission line carrying power from Oregon to California and another in-state power plant went offline unexpectedly. The cause of the outages is unknown at this time, the agency said.

But about 8:30 p.m., the agency issued a tweet calling off the emergency “thanks to conservation of Californians!" It said no power outages were ordered by operators of the grid.

Pacific Gas & Electric, the state’s largest utility, warned customers that it might cut power starting Tuesday because of expected high winds and heat that could create even greater fire danger. Some of the state’s largest and deadliest fires in recent years have been sparked by downed power lines and other utility equipment.

The Creek Fire started Friday and by Saturday afternoon exploded in size, jumped the San Joaquin River and cut off the only road into the Mammoth Pool Campground, national forest spokesman Dan Tune said. At least 2,000 structures were threatened in the area about 290 miles (467 kilometers) north of Los Angeles. The cause of the fire hasn't been determined.

While some campers were rescued by helicopters, others made a white-knuckle drive to safety. Juliana Park recorded video of flames on both sides of her car as she and others fled down a mountain road.

“A backpacking trip cut short by unforeseen thunder, ash rain, and having to drive through literal fire to evacuate #SierraNationalForest in time,” Park tweeted. “Grateful to the SNF ranger who led us down ... wish we got her name.”

The Mammoth Pool Reservoir is about 35 miles (56 kilometers) northeast of Fresno. It's surrounded by thick pine forests and is a popular destination for boating and fishing. Bone-dry conditions and the hot weather fueled the flames once the fire started, and it grew rapidly.

Lindsey Abbott and her family were guided to safety by a stranger they followed down from their campsite near Whisky Falls.

“It was so hot, you could feel the flames going through the window,” she told ABC30 in Fresno.

Ashley Wagner was among those rescued, along with two relatives and a friend. They were trapped in Logan’s Meadow behind Wagner’s Store, a 63-year-old business run by her aunt that was destroyed.

“My family’s history just went up in flames,” Wagner told the station.

In Southern California, crews scrambled to douse several fires that popped up, including one that closed mountain roads in Angeles National Forest. The largest was a blaze in the foothills of Yucaipa east of Los Angeles that prompted evacuation orders for eastern portions of the city of 54,000 along with several mountain communities. Cal Fire said the fire scorched at least 4.7 square miles (12.2 square kilometers) of brush and trees.

In eastern San Diego County, the Valley Fire broke out Saturday afternoon, and fire officials warned the blaze was burning at a “dangerous rate of speed.” By Sunday morning it had destroyed at least 10 structures after burning 6.25 square miles (16 square kilometers) and prompting evacuations near the remote community of Alpine in the Cleveland National Forest. At least two of the lost structures were homes, ABC10 News in San Diego reported.

Cal Fire said 14,800 firefighters were battling 23 major fires in the state. California has seen 900 wildfires since Aug. 15, many of them started by an intense series of thousands of lightning strikes. The blazes have burned more than 1.5 million acres (2,343 square miles). There have been eight fire deaths and nearly 3,300 structures destroyed.