The first two cases Barrett was set to hear involve the Freedom of Information Act and another involving disability benefits for railroad employees. 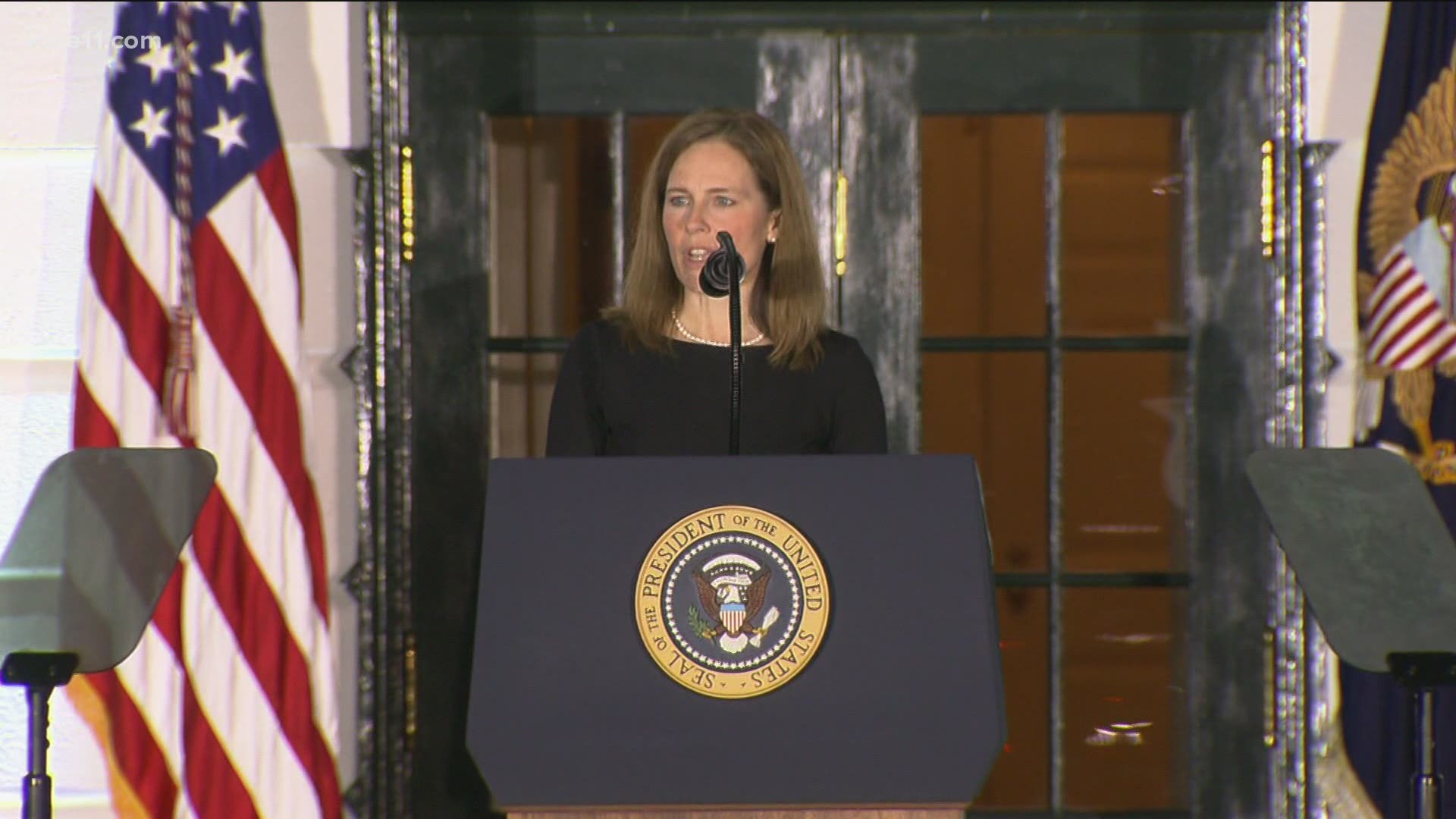 WASHINGTON — She didn't have to wear a black robe or even be in Washington, but Justice Amy Coney Barrett joined her new colleagues at the Supreme Court on Monday to hear arguments for the first time.

Because of the coronavirus pandemic, the high court began hearing cases by phone in May. That meant the public didn't see the new justice Monday, but at the beginning of the day's arguments Chief Justice John Roberts welcomed her publicly to her new role with the traditional greeting.

“Before we commence the business of the court this morning it gives me great pleasure on behalf of myself and my colleagues to welcome Justice Barrett to the court,” he said, wishing her “a long and happy career in our common calling.”

Participating in oral arguments is among the first things Barrett has done as a justice after being confirmed a week ago in a 52-48 virtual party-line vote, with Republicans overpowering Democrats to install President Donald Trump's third Supreme Court nominee.

The justices had a private conference Friday but Barrett didn't participate “so that she could prepare for oral arguments” according to a statement from court spokeswoman Kathy Arberg.

She also did not participate in decisions the high court issued last week involving extended timelines for receiving and counting ballots in Pennsylvania and North Carolina because of the need for a quick resolution and "because she has not had time to fully review the parties’ filings,” Arberg said at the time. But her vote also wouldn't have changed the outcome in either case.

On Monday, Barrett and her colleagues heard two hours of argument in two relatively low-profile cases: the first involving the Freedom of Information Act and the other involving disability benefits for railroad employees.

Like her colleagues, Barrett asked questions in both cases. Her first question had to do with a hypothetical case where a government official stamps “draft” on a document in order to try to avoid disclosing it. Barrett wanted to know “what other factors would a court consider” to determine whether the document should still be disclosed.

The pandemic upended a number of traditions that would have been part of Barrett’s first day of oral arguments had the justices been in their courtroom. Barrett would have joined her colleagues in a round of handshakes before taking the bench, a tradition every time the justices meet for argument or their private conference. The handshakes were suspended months ago because of the pandemic. Spectators would have seen her emerge from behind the court’s red curtains and take a seat on the far right hand side of the bench, the junior-most justice’s seat.

And while arguments in the courtroom are a free-for-all, with justices constantly jumping in with questions, the court’s phone-arguments are more orderly. Each justice gets to ask each lawyer questions in order of seniority. As the junior justice, Barrett asked her questions last.

If Monday's arguments were a low-key introduction to the work of the court, that will soon change. On Tuesday, as the country finishes voting, the court's cases include one about sentencing young people to life without parole. And on Wednesday, the day after Election Day, the court hears a case that involves a clash of LGBTQ rights and religious freedoms in a major swing state, Pennsylvania.

Next week brings a case that could threaten the Affordable Care Act, one that was front and center during Barrett's confirmation hearings last month. Democrats claimed that the Obama-era health law, known as “Obamacare,” would be in jeopardy if Barrett joined the court. Trump has urged the court to overturn the law.

The justices have said they will continue to hear cases by phone through at least December. So it’s unclear when Barrett will move in to her offices at the court, taking over the space of her predecessor, Justice Ruth Bader Ginsburg.