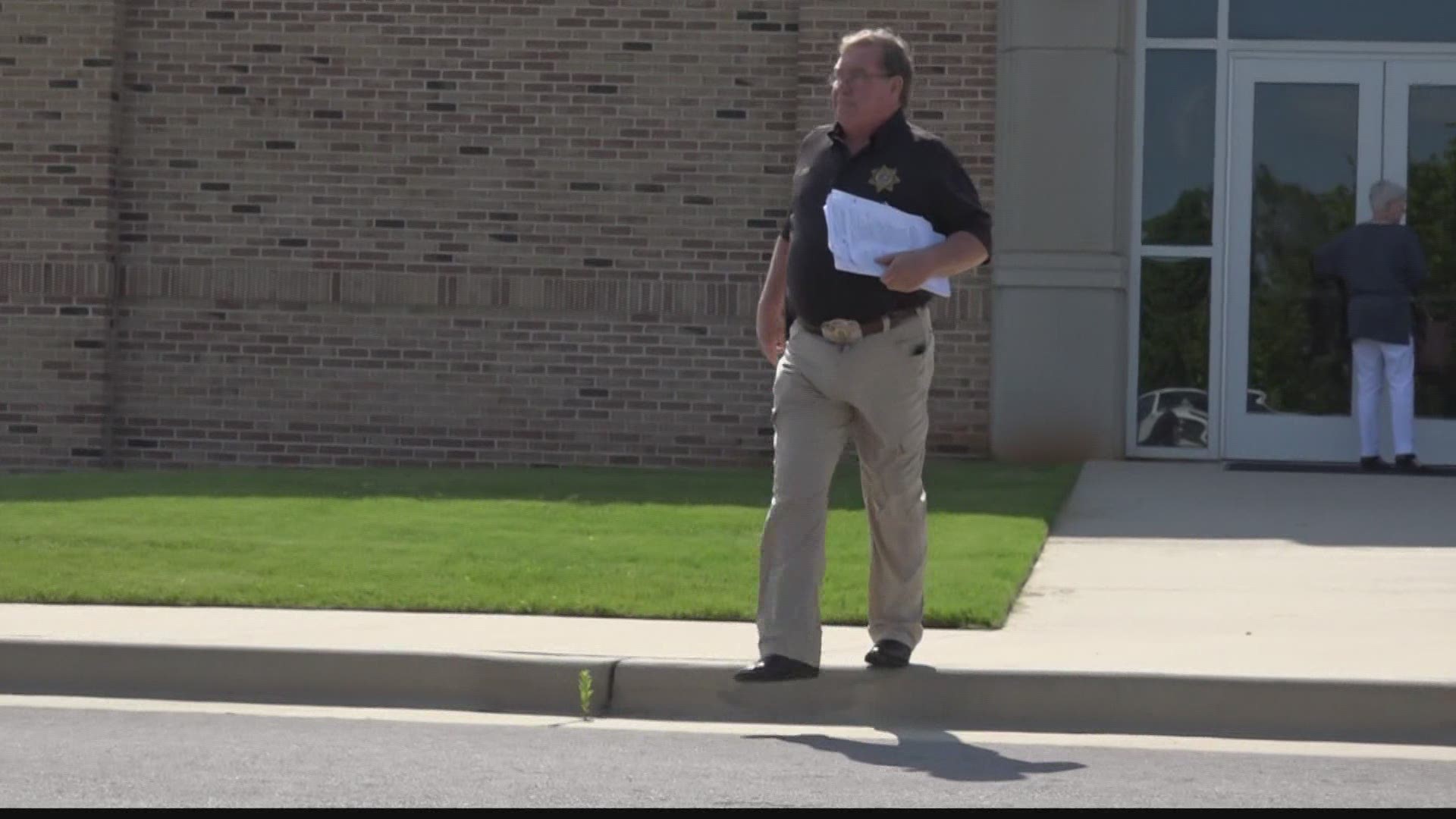 ATHENS, Ala. — The trial of Limestone County Sheriff Mike Blakely is underway. The WZDX News team is following the trial and providing daily updates.

Summary Of The Charges

In August 2019, long-time Limestone County Sheriff Mike Blakely was indicted on a total of 13 charges:

It's alleged that Limestone County Sheriff Mike Blakely misused campaign money, but the state says that he misued sheriff's department money as well.

The last two days of testimony have been centered around campaign money and looking deeper into Blakely's ethics charges. Today, travel expenses and per diem were the main topics of discussion.

Four witnesses took the stand today. Three of them work for the man in trial. All three of these witnesses have had many close interactions with Blakely throughout the years. The first witness was more so on the administrative side of things - like supervising finances at the department. This witness was questioned about how Blakely would receive per diem for work related trips BUT also - ask for extra money on top of his per diem allowance. This same witness is the second person to admit wiring Blakely money while he was allegedly traveling for law enforcement training sessions.

The next two witnesses - also employed BY the sheriffs department - accompanied Blakely on trips to Las Vegas in 2014 and 2015 - for training conferences. They also gave money to Blakely - and one witness hinted the cash may have been needed for the casino. Neither claimed to know about the wire money transfer sent from the sheriff's department while Blakely was in Vegas. But all three say that they never felt threatened by Blakely when he asked to borrow money.

The last witness of the day was actually from Las Vegas and works at a casino where Blakely allegedly gambled during his visits. This witness walked the court through some documents  to show that a card used for gambling games and machines - registered to Michael A Blakely - was used repeatedly. These documents showed the time each game was played - what kind of game was played and if there was a win or loss.

The defense brought up that anyone could have taken the card and used it under Blakely's name - even Blakely's now deceased wife.

A current employee of the sheriff's department took the stand.

This witness spoke on the many trips that Blakely has taken over the years to allegedly go to conferences and trainings.

In opening statements prosecutors said that Blakely may not have ever even attended these conferences and trainings.

The state asked the witness if she knew if he had attended and she said no, that she did not know.

Blakely doesn't travel by plane, so he drove to all of these events, oftentimes accompanied by other sheriff department members or county commissioners.

All these employees received per diem, which is a daily allowance given to someone, usually by an employer, to cover expenses such as travel, lodging, and food.

The witness said that alongside per diem - which is now at 75 dollars a day for the department - Blakely would ask for additional money on top of his daily allowance.

The amount he asked for was usually somewhere around or above $2,000 from the department.

The witness stated that this money was used for things like lodging but there are no receipts to prove that, and on several occasions he asked subordinates to wire him money in amounts ranging from $500 to $1000 dollars.

Witnesses who have wired him money have said that they didn't ask what the money was for.

But today, when asked about the wiring of the money, the witness said that Blakely was at a casino in Biloxi, Mississippi, while he was supposed to be in Gulf Shores at a commissioners conference.

When asked if she knew or assumed that he was gambling with this money, at first she said she did not know, because she was not there but when it comes to assuming, she said that she could assume that he was quote "playing in the casino"

It was also alleged in the opening statement that Blakely a gambling problem.

The defense's motion to dismiss Count Two and strike testimony and documents relating to State witness Trent Willis was denied. Willis gave the rest of his testimony for the State today. The State issued the following response to the defense's motion.

One witness alleged that Blakely took money belonging to Limestone County inmates from a safe at the sheriff's office. That witness said Blakely would replace the money he took with an IOU sticky note and that some of them were paid back.

The same witness, who is Blakely's former coworker and subordinate, said during the testimony that Blakely would ask them to wire him money while he was out in Las Vegas, allegedly for law enforcement purposes. The witness said they did wire him the money.

A separate witness walked the court through some bank statements, showing that Blakely's personal bank account would have been overdrawn on many occasions had he not deposited the money previously mentioned throughout his indictment.

It was also mentioned during testimony that many checks intended for his campaign account never found their way there, but rather ended up in Blakely's personal account.

Late Monday night, Limestone County Sheriff Mike Blakely's defense has filed a second motion to dismiss one of the charges against him. The motion also requests that the testimony of one of the State's witnesses, Trent Willis, be striked from the record and to also strike all documents relating to Willis.

Blakely's defense claims that the State was "less than candid" regarding Willis during the discovery process. They claim the prosecution violated Blakely's 6th Amendment right to due process during Willis' testimony.

The defense claims that the prosecution intentionally withheld information regarding the Willis investigation.

The full motion can be read below:

WZDX has been following the Blakely trials and today happens to be the first day of testimony. The main topic of discussion was campaign funds.

Blakely is the longest-serving sheriff in the state, since 1983.

And as most who run for office - Blakely has a campaign group called Friends of Sheriff Mike Blakely.

Prosecutors allege Blakely used campaign funds for personal use AND that many donations went undisclosed.

When it comes to campaign contributions and donations - they MUST be documented. No matter how big or small - cash or check - every cent has to be documented for transparency purposes.

So - while there is no solid evidence that proves that there was criminal intent - there are a lot of missing pieces when it comes to documentation. The state had many receipts to prove this.

Now the question is - did Blakely knowingly use campaign money inappropriately and neglect to record donations on purpose or was it simply an oversight?

Blakely's lawyers claim that none of this is criminal and that they can explain everything.

A total of 7 witnesses took the stand today - but the seventh witness was suspended because they are also under a separate investigation. The state allegedly knew this and Blakely's lawyers said it should have been disclosed...they motioned for a mistrial but the judge denied it.

During opening statements last Friday, the state alleged that many of the charges had criminal intent behind them and that Blakely was trying to avoid overdrawing from a personal bank account with the money taken.

Today during testimony, the state focused on asking witnesses about documents and records - or lack thereof - when it comes to campaign funds.

The state says that testimony is moving quicker than expected and that the trial may follow suit.

Limestone County Sheriff Mike Blakely's defense team on July 18 filed a motion to dismiss the charges alleged against him for theft of property.

Blakely's defense claims in the motion that the State's opening argument show's their intent to use the four theft of property charges, two first-degree and two second-degree, beyond the scope of the law's intended purpose.

Jury selection started Monday, July 12, in the trial of longtime Limestone County Sheriff Mike Blakely. By the afternoon of July 16, the final 15 jurors were selected.

More than 100 possible jurors were narrowed down to a jury of 15 people at Athens High School on July 16. A total of twelve women and three men were selected to serve on the jury.

The jury selection process took place over several days, even after questionnaires were sent to 500 potential jurors.

The jury selection process allows attorneys on both sides to ask questions of the potential jurors in order to weed out any biases and to help obtain a fair trial. Some of the questions potential jurors were asked were regarding personal ties to Sheriff Blakely or whether they had already come to a conclusion regarding the case.

Following the process, the 15 jurors were sent to the courthouse to hear opening arguments from both sides.

The prosecution bears the burden of proof, meaning it is up to them to show beyond a reasonable doubt that Blakely committed the alleged crimes with criminal intent. The State argues that Blakely knowingly committed the offenses in order to avoid overdrawing a personal bank account.

The defense argued that each allegation has a simple and logical explanation. They argue that Blakely did not act with criminal intent, therefore no crime was committed.