If passed, Senate Bill 5 would allow people to carry a loaded gun in their car without a pistol permit. 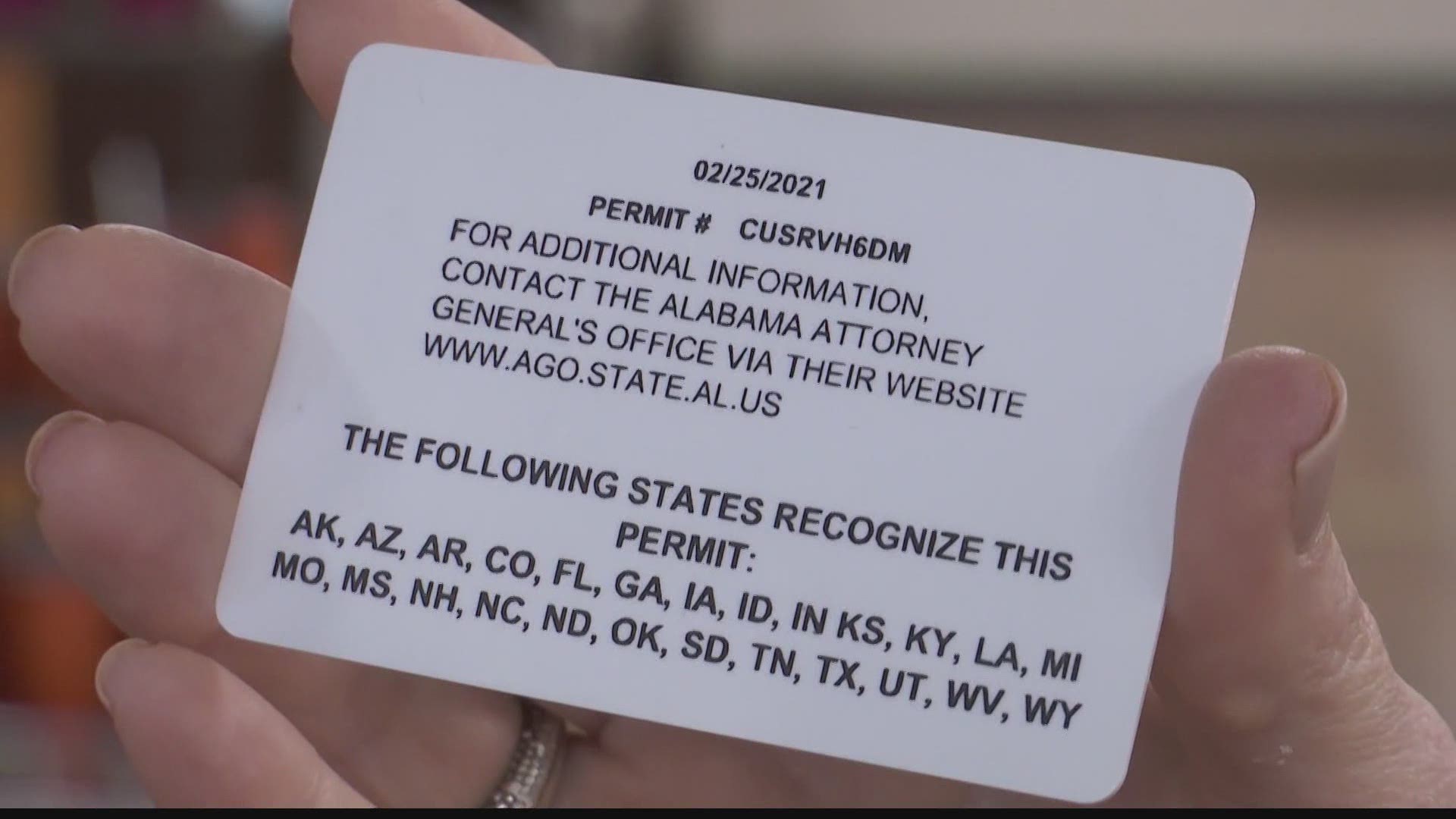 ALABAMA, USA — The Morgan County Sheriff's office is seeing an uptick in people applying for concealed carry permits, but a new bill in Alabama could completely eliminate the process.

A Republican senator representing Tuscaloosa wants to loosen gun restrictions in the state. The new legislative session begins on February 2, 2021, but Senator Gerald Allen has prefiled a bill that would allow Alabamians to conceal carry a gun without a permit.

Mike Swafford with the Morgan County Sheriffs Office says permits add a second layer of protection and checks for those who want to own and carry a handgun. He says if passed, the bill could make it more dangerous for law enforcement officers.

"When we do a traffic stop, it puts everybody more at ease that we know hey, number one that you're a lawful registered handgun owner and that chances are you have it on you," said Swafford. "Also, it allows that person to say hey, I've done everything right to be able to do this."

Under current law, people who can legally own a gun in Alabama can open carry but must have a concealed carry permit in order to transport a gun in their car without having to unload it and lock it up.

If passed, Senate Bill 5 would allow people to carry a loaded gun in their car without a pistol permit.

"There are people who don't really want to conceal carry. They don't really want to pay the $20 for the permit. They want to have their firearm in their home, but they want to practice," said President of Bullet and Barrel, Melanie Murray. "Just the ease and the convenience, also not exposing you to not being able to defend yourself when you're moving from point a to point b. That's going to matter to them."

Right now in Alabama, people must apply for and purchase a permit from their  local sheriff's office to carry a gun hidden under a shirt or in a purse. Some argue the rule undermines Second Amendment rights and creates barriers for people who can't afford one.

If passed, the bill would eliminate fines for carrying a gun without a permit.

"Based on the numbers that 2020 showed us, we had over 10,000 people get a concealed carry permit. That's 72% more than in the previous year, so whatever limitations or obstacles may be perceived, they appear to not be there," said Swafford.

Similar bills have been filed in recent years, but none have passed.

"The money that is generated by the concealed carry permit process buys equipment, puts our deputies through training, and helps alleviate the tax burden for Morgan County taxpayers," said Swafford.

Murray says people who have or want a concealed carry permit should go through training on the rules and how to safely carry. She recommends USCCA, which offers services for people who want to conceal carry. Click here for more information.